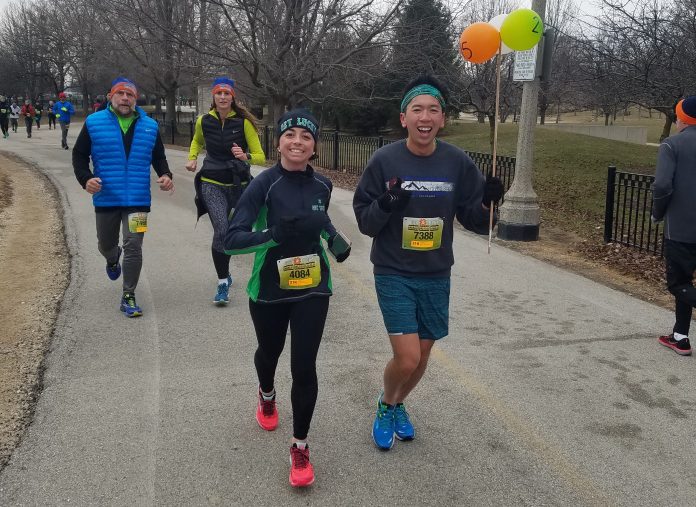 While many Chicagoans watched the river take on itís annual green glow before the St. Patrick’s Day parade, nearly 800 runners gathered in Jackson Park for the March 17 Get Lucky 7k/14k/21k race.

March usually offers a break from the polar vortex and the opportunity to get the running season underway. This event is part of the Monster Run Series organized by Team Ortho, a Minnesota-based charity organization. Unfortunately, this year their website provided little information and even less email communication.

So, at 5:30 a.m., I drove downtown not knowing what to expect. I was able to find a metered lot adjacent to the start. I heard runners talking about the lack of planning, communication and restrooms. Sadly, there was speculation this could be Team Ortho’s last Chicago event.

Huddled behind a box truck, staying out of the wind, I met a few members of the Logan Square Three Run Two running club. Their positive attitude put me back in a good place and knowing I had escape routes at 7k and 14k, if the course was not properly supported, I decided to make the most the day.

At 8:01, those running the 14k and my fellow half-marathoners headed out along Lake Michigan towards Soldier Field. The 7k runners would start a half hour later. The lake was churning and it was certainly a cold, dreary Chicago day. The flat out and back course had water and aid stations sprinkled between each turnaround.

By mile three, I knew I had gone out too fast when Kevin Daliva, the 2:15 pacer, passed me on the left. I decided to try and keep him in range as long as I could.

Somewhere between miles five and six, the half-marathon leaders were on their way back. Ryan Moncrieff of Marysville, Ohio was on his way to a 1:11:35 first place finish. The first female finisher, Chicagoan, Fiona Carlson, glided past shortly after posting a time of 1:26:27.

Just before the turnaround, Brooke Borwell, joined the 2:15 pace group in her first half-marathon. She, Kevin and I stayed together supporting each other until mile eight or nine. During the last half mile, the first photographers appeared and in the distance you could hear the final volunteer with a bullhorn alerting us of the final turn to the finish!

The race concluded with medals and a bag of recovery snacks. With no post-race activities, I went back to cheer on the remaining racers. The Chicago Get Lucky lived up to its name this year as they were lucky to have volunteers and committed athletes who stuck together to make the event successful. The nice swag and free event photos almost made up for the lack of communication and post-race celebration.