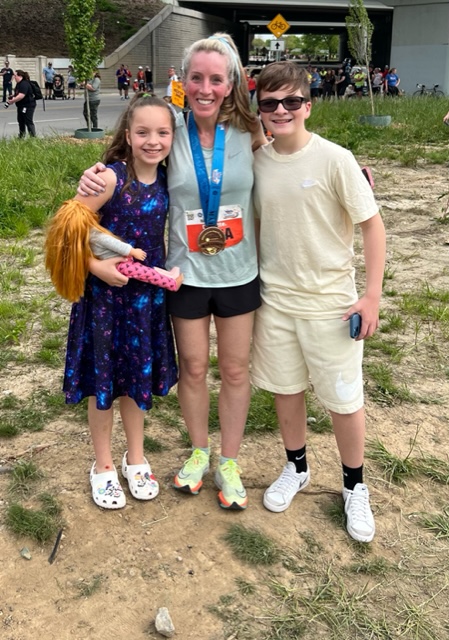 On Saturday, April 30th I participated in the Kentucky Derby Marathon. This annual event brings 8,000 runners from over 40 states and 10 countries to run this interstate event. Offering a marathon, half marathon, and relay option, along with a six-hour cut off, this race provides options for all runners.

The race began at 7 AM in downtown Louisville. Just outside of the Little Slugger stadium, runners gathered anxiously to wait for the starting gun. To kick things off, the bugler from Churchill Downs played “Call to Post”. After the National Anthem and a cheerful rendition of “My Old Kentucky Home”, the wheelchair division began followed by the marathon and half marathon runners. 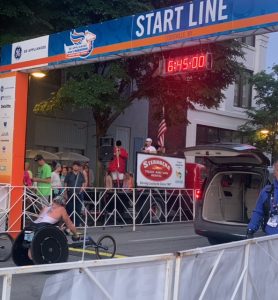 The temps were in the low 60’s and the skies were cloud covered, providing runners a cooler start to the day. The race wound through downtown Louisville taking in the historic site and landmarks. I was impressed with how many turns were included in the course. Law-enforcement officials closed countless streets, as spectators lined the first half of the course.

The constant turns kept runners engaged and the scenery ever-changing. Around mile 10, runners entered Churchill Down where they were able to run alongside the horses practicing for the Kentucky Derby. Runners circled through the track before exiting back onto the streets and entering the University of Louisville campus area. A college band greeted runners as we were filled with the college spirit. 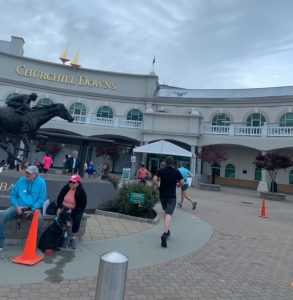 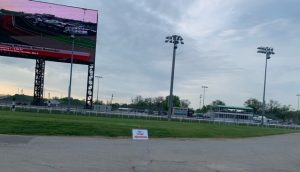 At mile 12.5 we were brought back into downtown Louisville and the half marathoners split from the full marathon. The full marathoners crossed the Big Four Bridge, is a six-span former railroad truss bridge that crosses the Ohio River, connecting Louisville, Kentucky, and Jeffersonville, Indiana. 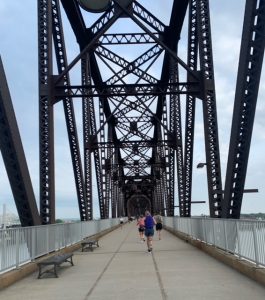 Any marathon that includes two states is a winner in my book. The sheer technicalities for the Race Director and support staff are intense. Working with multiple law-enforcement agencies and municipalities to secure permits and provide Runner protection is a monstrous task. Ensuring that volunteer stations are adequately placed while following that state’s Covid protocol is also incredibly difficult. And yet, Chris Martini, RD of the Kentucky Marathon, and the incredible staff and volunteer team did this seamlessly.

The most difficult part of the race was the spiral incline leading up to this bridge. It felt never ending, especially during the second half of a marathon. The views from the bridge were beautiful and offered runners the opportunity to take in the Louisville skyline and Ohio River. 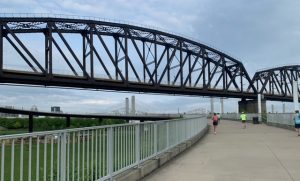 After crossing into Indiana, runners enjoyed a flat, paved, trail that led into a residential area of the state. It was an out and back from the bridge, which challenged runners as the sun began to peek through clouds around mile 15 for me. There was little to no tree covering so the challenge of increasing temperatures hit me, especially as a non-heat acclimated Chicagoan who saw snow just a few days ago!

We circled back to the bridge and were again challenged with the incline, this time more intensely, as it was miles 24 to 25. The course then led runners back into downtown Louisville where we finished at the Lynn Family Stadium and were greeted with a large celebration. 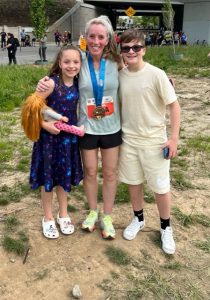 I was incredibly impressed with the thoughtful course and incredible course support throughout this event. There was an energetic pace team from Dick’s Sporting Goods (Yes, I’m sure this time 🙂 – If you know, you know) and several places for spectators to catch their runners.

The expo was held at the Louisville Convention Center. It was medium sized, with several vendors and information about the course. It was easy to access and even had a bourbon tasting truck! 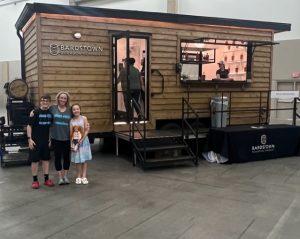 I made a weekend of this event with my family and would highly encourage our Chicago area runners to do the same. It is about a 5 hour drive and about 20 degrees warmer than our Chicago spring. Held at the end of April, it’s just the time we need a break from our never ending winter!

We stayed downtown, just blocks from the start line and had countless restaurants, bourbon bars, and coffee shops within walking distance. The city of Louisville holds a huge festival and many different events the two weeks prior to the Kentucky Derby so there is plenty to do in the downtown area.

We had the opportunity to visit the Louisville Zoo, which was about a 10 minute drive from the downtown area. This is a great, family friendly zoo with multiple animal exhibits and shows. We visited in the evening and were enchanted by the Wildlight exhibit. The exhibit spans a 1.4 mile walkway and showcases lit up, hand crafted animals, insects, and flowers in vibrant colors. 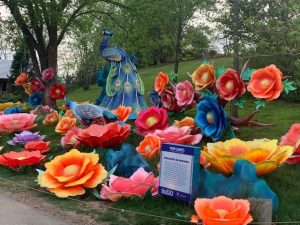 It transports you to a magical land of beauty as you walk through the exhibits. And unlike Chicago, the temperatures were warm enough that we were comfortable walking in the evening with shorts and T-shirts. Most of the animals had been put away for the night, so if you are interested in seeing the animals, I would recommend a day trip. 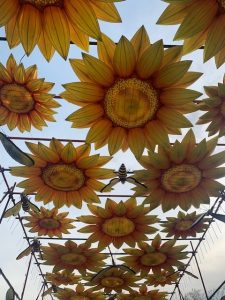 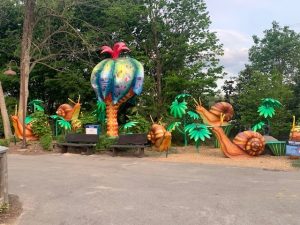 But, the Wildlights were the perfect way to end the day after the marathon. A slow stroll this magical wonderland was peaceful and beautiful, as I took in all of the magic of the Louisville Zoo. 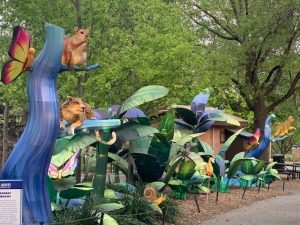 Another great option for active families is the Louisville Mega Cavern underground zip line. Ranked as the number one attraction in the state of Kentucky by TripAdvisor, this activity is one you definitely should not miss on your trip to Louisville. Located about 10 minutes from downtown, it’s easy to get to and offers free parking for guests. The underground adventure Park showcases a mega zip line tour, ariel ropes challenge course, mega tram historical tour, and mega bike electric bike tour. It is the perfect addition to a weekend getaway for active families. 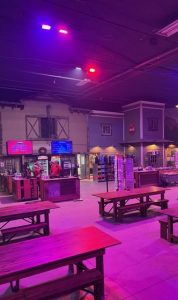 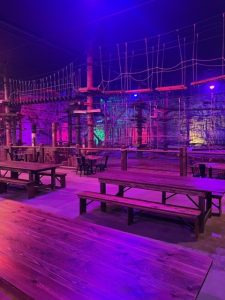 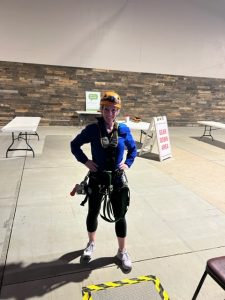 Participants go up to 45 mph and as high as 90 feet off the ground on the zip lines which weave through the underground cave system. Each tour group is kept small and led by a set of tour guides.

Our tour guides, Charlie and Drew, kept us safe and having fun the entire time. They prepped us for each zip line and we’re especially reassuring to me, as a nervous mom with my children participating. They were incredibly skilled in maneuvering each guest through the intense 2.5 hour experience. I cant speak highly enough about the special care they gave to each member of the group, making sure that our experience was fun, memorable, and safe. 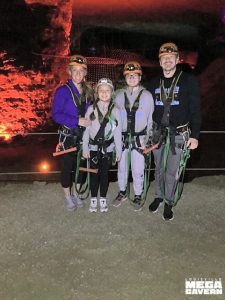 It was evident that Charlie and Drew knew every inch of the zip line tour and that nothing caught them off guard. They wove in humor to ease our nervous excitement as we stood 100 feet in the air waiting to step off the platform into the cave filled darkness and zip across the cavernous trench below.

The experience was incredible and the tour guides are largely to thank for the unique and fun experience. I know my daughter will never forget rolling herself into a ball and being given an extra push to ensure her light frame made it the full length of the zip line!

While the marathon was the event driving our trip to Louisville, my family enjoyed every second spent in this incredible city. This spring, I urge you to take advantage of an out of state race and all of the “extra’s” you can enjoy while there. Make it a run-cation and let us know about your experience! And make sure to check back in here for our next “On the Road” experience for Chicago Athletes!