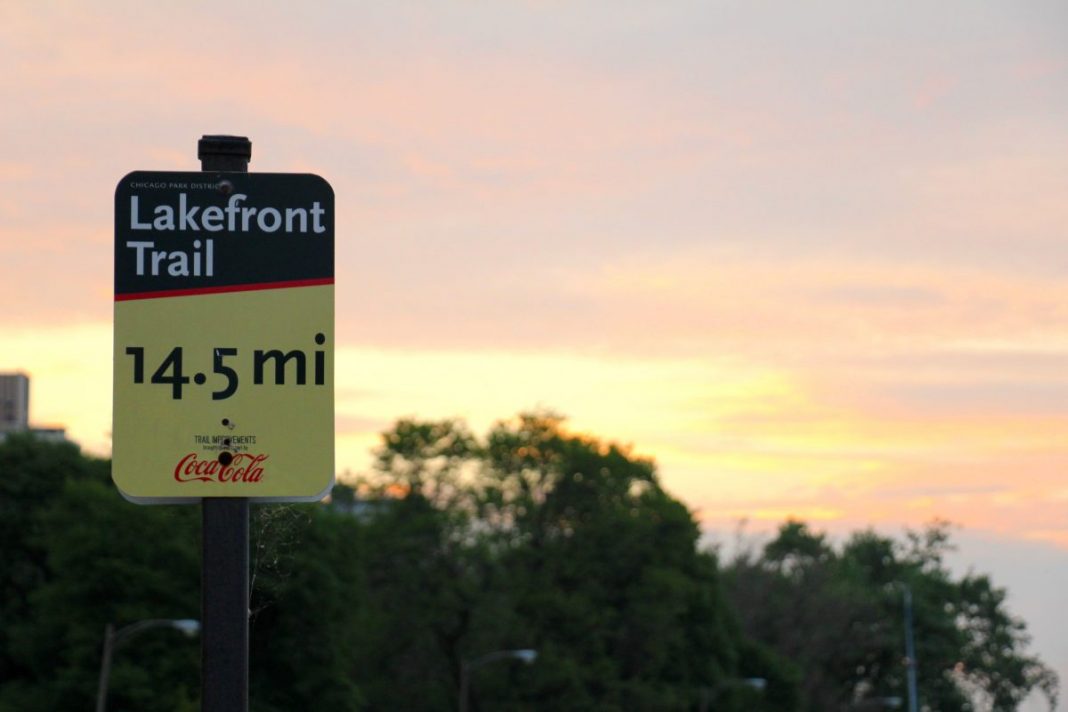 Back in December, the city of Chicago received wonderful news: the entire 18 miles of the Lakefront Path would undergo construction to create separate paths for bikers and runners, thanks to a generous $12 million donation from Ken Griffin, friend of Mayor Rahm Emanuel.

With over 100,000 people utilizing the path on any given summer weekend day, according to Emanuel, congestion has always been an issue, so athletes from the city and suburbs rejoiced at this information. Construction officially started this spring, and is set for completion by the end of summer 2018.

Bring out the Barriers

Since his beginning days in office, Emanuel has made the trail his priority, so this separation was a longtime coming. While the end results are bound to be an athletes dream, alleviating crowds and creating an overall safer environment, the regular path-users may feel frustrated and even more crowded this summer while construction is taking place.

As of May 22, the trail between Diversey Parkway and North Avenue is closed off, and pedestrians are encouraged to use a detour that goes west of Lake Shore Drive. Construction also began between Oak and Ohio streets, but cyclists and joggers are still able to access parts of that portion during construction.

Casey Schoenborn from Bartlett is currently training for her first half marathon, and was excited to log some mileage in on the Lakefront Path, until her run was interrupted by construction barriers.

“I knew there was construction going on, but didn’t know where or how extensive,” Schoenborn says.

After running two miles south from Oak Street Beach next to construction, she decided to turn around by Navy Pier and head north for the remainder of her run rather than trying to veer around the Navy Pier Flyover construction too. She also encountered the construction near North Avenue, but was able to easily redirect and run along the lakefront.

“It wasn’t a huge deal, and I should have been more prepared by looking up detours, but it did sort of ruin my motivation that day,” Schoenborn adds. “I’ll probably just do the rest of my training in the suburbs to avoid it this summer.”

Kimberley Stedman, founder and owner of the F^3 Lake Half Marathon, also decided to completely avoid biking on the trail until the construction is complete. As she trains for a half Ironman, she says working through the detours and swerving through the crowds is too scary right now.

“It’ll be wonderful when it’s done, but for now it just means taking a few field trips, or going out in the suburbs to train,” Stedman says. “I’m lucky I have a car so I can venture out a little bit, but it’s not a good time to be on the lakefront as a cyclist.”

Athletes in training aren’t the only ones taking the hit from closed off paths. The annual United Run to the Zoo 10K and 5K race took place on June 4, right after the first portion of construction began. Race directors were forced to make last minute changes to the course, and didn’t have time to accurately measure before racers crossed the start line. This resulted in a longer 10K course, leaving many participants irritated with their inaccurate times.

The Monday following the race, directors sent out an email with results and recaps, along with an apology.

“Due to unplanned construction along the 10K route, we had to make last minute course modifications,” the email states. “In making those course changes, your safety was our top priority.  Unfortunately, the final distance was slightly longer than a 10K.  We know you train hard and work to reach personal PRs, and we sincerely apologize for this miscalculation.”

Stedman mentions that F^3 had to work around the construction for the 2017 race, even though it is held in January, because the initial construction between 31st and 51st had already started the previous summer. They didn’t recertify their course with the new changes since it isn’t permanent, and fortunately, there didn’t seem to be any issues with the new course.

“We rode the course a few times with Garmins and drove it a few times and we made it work this year,” she says.

As this summer heats up and more and more races take place each weekend, Kyle Whitehead, Government Relations Director of the Active Transportation Alliance assures Chicagoans that they are doing everything they can to make this transition a smooth one.

In fact, Whitehead says Active Trans is working closely and frequently with the Chicago Park District and the Chicago Area Runner’s Association to efficiently inform users and race directors of detours and plans as soon as they are ready.

During Bike the Drive on Memorial Day Weekend, Whitehead says the detours were a big concern because the event usually drives traffic on the path. To avoid complications, they hired extra volunteers to direct traffic that day, which is something he suggests to other events as well.

For the 2018 F^3 Half, Stedman hopes to be able to do something similar as the 2017 course, but they cannot determine that until November when construction for the season is done and they see what they can work with.

“It looks like from Roosevelt to 31st won’t start until 2018, which is good because that’s where our start and finish is,” she explains. “Obviously construction won’t start in January, so the middle might be different, maybe on the new bike path if that’s done, but it’s not clear yet.”

Greg Hipp, director of events and marketing of CARA, says race directors need to be proactive in looking for alternative routes to make sure the courses are safe and accurate for their events.

“Certified Race routes for many events will have to be re-measured with path changes,” Hipp says. “Although, there may be cases where a race is not able to produce a route that is the planned distance. In these circumstances we hope race directors will communicate this openly with their participants.”

As someone who puts on events himself, he also hopes that participants will understand the challenges many races are currently facing and will be through the duration of the construction, and even after the new paths are completed.

Fortunately, the construction will not negatively affect any of CARA’s summer marathon training, which is the largest training group in the city.

“While we will have to change some of our traditional routes, the current detours are workable, and ultimately in the long run any temporary inconvenience experienced now is going to pay off,” Hipp adds. “We encourage Lakefront Trail users to maintain a positive outlook on the project.”

Because this idea has been discussed publicly for a few years, Whitehead says that they have constantly stressed the importance of signage on the trail. Now, Active Trans is really pushing the marked detour approach, which is heavily embraced by the Park District.

“When the Park District was repaving last summer there was an abrupt closure, and not much communication with the public or media or on the trail itself,” Whitehead recalls. “People were going in the sand and making their own detours, and obviously that’s not a good situation for anybody.”

For instance, right now between Fullerton and North Avenue, parts are open with frequent signage warning users of the upcoming closures. As construction continues and the path is fully closed, Whitehead says people will be directed through Lincoln Park and plenty of signs will make this detour obvious.

To make sure detours are clear, Whitehead says he along with his team are out getting feedback from trail users. Luckily, he says the first few weeks of construction has been pretty positive.

“People are not excited about the trail being closed, but they do appreciate there are detours available. We’re continuing to monitor that,” Whitehead adds.

For those who still plan to use the trail regularly this summer, and rely on the hydration stations from Fleet Feet and Ram Racing, Brian Hudson who runs the stations assures everyone they will still be available but just in different locations.

Right now, the three locations are at North Avenue, Diversey Harbor and 18th Street. Hudson says the North Avenue station will be moved to the inside of the path where the detour is, and other locations are to be determined as more closures are announced.

“It should be easy, [the North Avenue station is at] the same spot we move to during the Air and Water Show and other events so that runners and pedestrian traffic don’t cross,” Hudson explains.

He is thankful the park district has been so helpful and proactive in this entire process because his biggest fear is confusing runners or themselves. They are still working on signage and communication, but strive to make it as accessible as possible every Saturday and Sunday from 6 a.m. to 11 a.m.

Aside from the current construction on the north and south ends, dates for other segments have yet to be determined, but Whitehead says plans are coming together quickly. In addition to their weekly meetings, CARA, the Park District and Active Trans will continue to host outreach meetings to involve the public on design and schedules.

For other updates and changes throughout the summer, Whitehead advises users to stay active on social media and follow the hashtag #chiLFT.

“[Active Trans], CARA and the Park District use it often, and it became popular especially around morning and evening commute times,” Whitehead says. “People post about the detour, weather impacts and other stuff, so it’s a great way for people using the trail to plan ahead.”

Updates will also be posted on the CARA, Active Trans and Park District websites, and the official detour and plans will be shared on http://www.chicagoparkdistrict.com/lakefront-trail/.