The Bank of America team added a one-mile road race to its portfolio of Shamrock Shuffle weekend events, hosting the inaugural race at Grant Park the day before the 40th anniversary of its premier 8k.

As with any event at Grant Park that involves multiple road closures, traffic can be a bit congested, however this wasn’t a problem and parking ended up being convenient allowing for a short trek to the event staging area. Bib pickup was a breeze, which meant there was plenty of time to get a few shakeout miles in before checking gear and heading to start line.

The race was organized into four waves: Recreational, Competitive Masters, Competitive Open, and Elite, which allowed for the participants of each wave to stick around and cheer each other on after their race was over. Music pumped throughout the staging area and the race announcer did a superb job of getting people to their proper waves on time while rallying the crowd to support each wave of runners.

While everything attached to the event was top notch, the course was a bit of a letdown. However, this was understandable given the limited real estate available when holding a race the day before the much larger Shamrock Shuffle. Participants battled an uphill the first quarter mile, followed immediately by a hairpin turn. After the first quarter of the race, there were a few straightaways interspersed with three tight right turns, along with some additional slight hills over the Metra tracks. Eventually, racers were rewarded with a slight downhill to the finish. 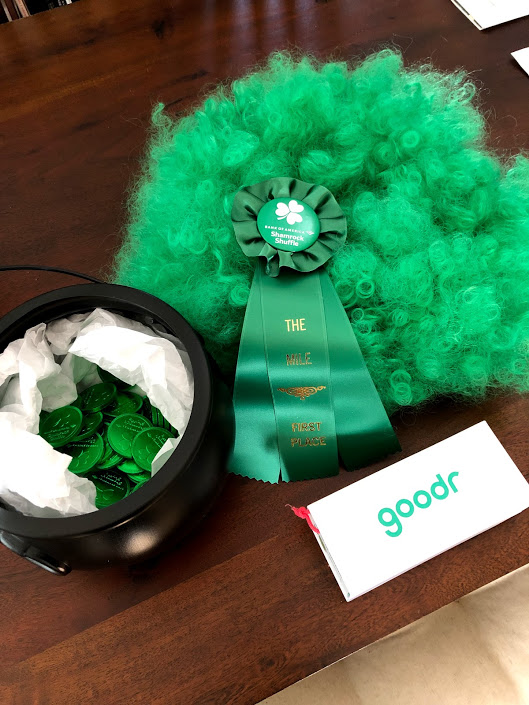 The overall winners of each wave received some pretty sweet swag: Goodr sunglasses, a huge stash of Shamrock Shuffle chocolate medallions, a ribbon, and a green wig making them an honorary member of the Green Guys – a quintessential group of racers who year after year run the 8k in full green body paint, clothes, and wigs. (Believe me, you know who they are!)

Overall, this certainly wasn’t the fastest course, but given the logistics of putting on an event within the staging area of a much larger and more established event, organizers did an amazing job.