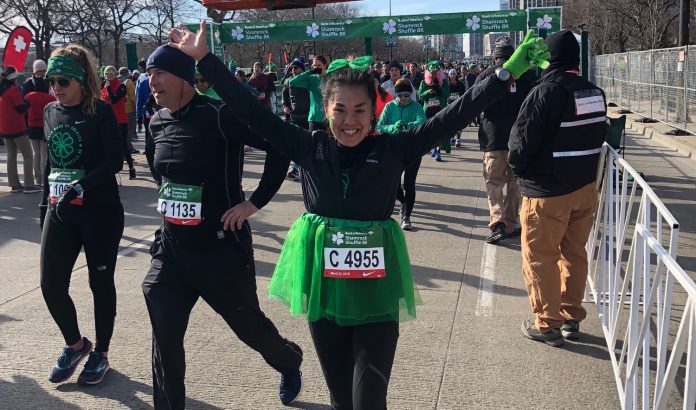 Chicagoans know the Bank of America Shamrock Shuffle 8k as the official start of the racing season. We often joke that everyone comes out of hibernation to participate in the largest 8K in the country or the 2-mile walk.

Both distances start and end in Grant Park, and the 8k the course takes runners on a tour of downtown Chicago, much like the route of the Bank of America Chicago Marathon. The energy around the city and the spectators cheering makes this race a one-of-a-kind event,  and a must-do for anyone who wants a little taste of the marathon but does not want/need to run 26.2 miles.

The race is extremely well-organized; with over 20,000 participants, the 8k has two wave starts and multiple corrals to alleviate crowds as much as possible. The post-race party featured live music, food and beer and after parties at nearby local bars for those who want to continue celebrating St. Patrick’s day tradition.

This was my ninth time running the Shamrock Shuffle; it has become a tradition to participate in this race. My friend and training partner Julia Walters, joined me for a pre-race warm up before the race. We ran from the Northside to downtown; the lakefront was icy and the lake was ferocious. The weather in Chicago this weekend was less than ideal, with temperatures in the low 30’s and strong winds from the east. It was a cold morning, compare to last year’s weather, which was in the 80’s.

I did noticed the corrals seemed a little empty this year, and wondered how many people decided not to run based on the weather. Regardless, the spirit of this race and the running community in Chicago continues to amaze me. I saw many people I have not seen in years from CARA, November Project, Fleet feet, and Well-Fit.

A special acknowledgement and mention to the green men who kept the tradition alive in their full costumes — shirtless, green tights and green wigs — despite the cold and windy conditions.  There were plenty of other runners in spirited costumes and a lot of green, too. I truly love this town: where else do you see running dinosaurs and unicorns on the course?

Now that the running season has officially started in Chicago, we can all expect to see more people on the lakefront path training and enjoying everything that the city of Chicago has to offer.