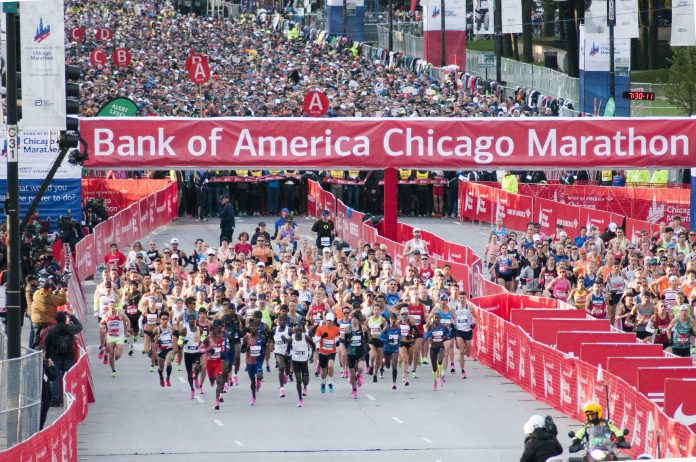 2020 Bank of America Chicago Marathon Field Selected Today; Runners Can Still Make an
Impact in 2020 by Joining a Charity Team

CHICAGO – The Bank of America Chicago Marathon announced today that more than 12,000 runners raised an event record $27.1 million through its 2019 Charity Program. The funds raised deepen the impact of the program, which has contributed over $234 million to local, national and international causes since 2002. Today’s announcement coincides with the start of a new journey as runners learn their drawing selection status for the Sunday, October 11, 2020 event.

“The Bank of America Chicago Marathon is a celebration of humanity and the stories that come to life across 26.2 miles of roadway,” said Carey Pinkowski, Bank of America Chicago Marathon executive race director. “Today, we celebrate the individuals who continue to challenge themselves by taking on the distance and those who decide to make their race more meaningful by dedicating it to a cause greater than themselves. We look forward to welcoming a new field of competitors in 2020 as we enter another decade of racing in Chicago.”

The Charity Program represents nearly 25 percent of the expected 2020 Bank of America Chicago Marathon field, which also includes runners who have secured their entries through one of six guaranteed entry applications and the non-guaranteed entry drawing. Runners who did not receive an entry through the drawing can still sign up through a limited number of entries available through the event’s official Charity Program.

The 2020 Bank of America Chicago Marathon Charity Program includes 172 nonprofit organizations raising funds related to 10 different social issues, including education, youth development, health care and social services. Runners who register to run with an official charity at this time will be required to raise a minimum of $1,750.

For a list of official charities and information on how to register by joining a charity team, go to chicagomarathon.com/charity.

About the Bank of America Chicago Marathon
In its 43rd year on Sunday, October 11, 2020, the Bank of America Chicago Marathon welcomes thousands of runners from more than 100 countries and all 50 states, including a world-class elite field, top regional and Masters runners, race veterans, debut marathoners and charity runners. The race’s iconic course takes runners through 29 vibrant neighborhoods on an architectural and cultural tour of Chicago. Annually, an estimated 1.7 million spectators line the streets cheering on more than 45,000 runners from the start line to the final stretch down Columbus Drive. As a result of the race’s national and international draw, the Chicago Marathon assists in raising millions of dollars for a variety of charitable causes while generating $378 million in annual economic impact to its host city. The 2020 Bank of America Chicago Marathon, a member of the Abbott World Marathon Majors, will start and finish in Grant Park beginning at 7:30 a.m. on Sunday, October 11. In advance of the race, a two-day Abbott Health & Fitness Expo will be held at McCormick Place Convention Center on Friday, October 9, and Saturday, October 10. For more information about the event and how to get involved, go to chicagomarathon.com.