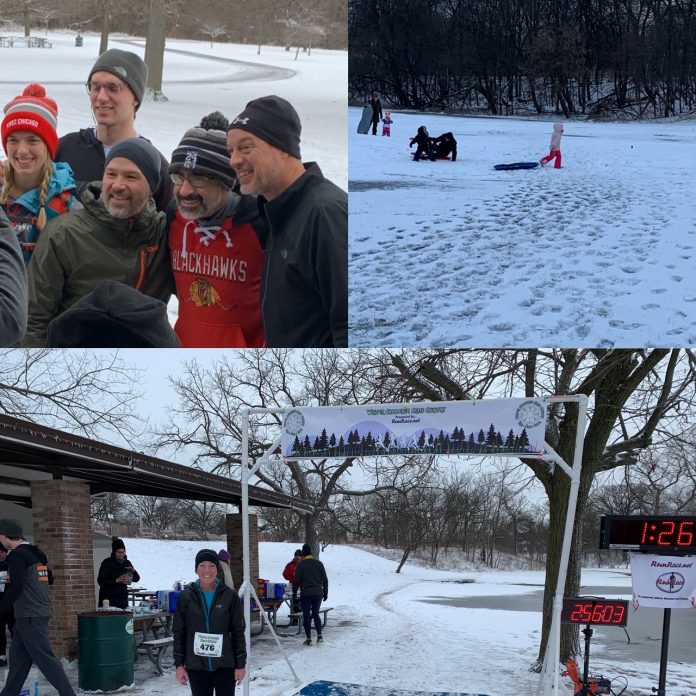 The Winter Challenge Cross Country III was held on Sunday, January 12 in the Caldwell Woods/Bunker hill trail system of the Forest Preserve District of Cook County. This year’s event featured a winter wonderland of trails throughout the scenic beauty of the forest preserve.

This race is one of several hosted by Bill and Michelle Thom. Runners themselves, they know how to put on an amazing event. The course is incredibly well marked with flags every 50 steps.

This is probably my favorite part about their races. I never get lost! I have gotten lost on countless trail races and have had to double back, start over, and lose time while gaining mileage…something you don’t want to do in a race. Bill and Michelle ensure that their course is so well marked, that you have to work really hard to get lost.

This husband-and-wife duo truly cares about their racers. The night before each of their races, they send out a detailed email about the course. This year, they had to move the course a bit to account for the wet patches and knee-deep mud puddles that resulted from the wild weather the day prior. I so appreciate the detailed email the night before and also the fact that they are willing to move the course so that runners have the best experience possible.

This year’s winter cross-country challenge featured three different race events. There was a 6-hour ultra that began at 8 AM, followed by a 5K and 15 K that began at 9:30 AM. All runners followed the same 5K loop which took us through a picturesque journey of snow covered trees and packed trails. There were a few portions of trail that had become quite muddy as the day went on, but I did not encounter any standing pools of water that went higher than my sock line.

The course was trail – based, but not severely technical. This is a great course for first time trail runners that want to experience the beauty of nature, while tackling the challenge of a trail. There were slight inclines and declines, coupled with a few portions of overgrown trees, but for the most part the trail was packed pretty tight.

Because of the snow we had received on Saturday, runners got to share the trail with families out enjoying the sledding hill. After crossing the start line on each 5K loop, runners dodged the young ones as they flew by on sleds. It added a fun obstacle course type element to the entire experience. I loved seeing the children all bundled up flying down the hill and even enjoyed a few cheers from parents as they went to catch their children and haul them back up the hill. It would have been fun to see who got the bigger workout that morning!

After crossing the finish line, runners were greeted with a pizza party in the warming center and a brief award ceremony. All runners received a short sleeve technical shirt and an amazing winter experience.

This low-key race is one to keep in mind for next year, especially if the temperatures are in the mid 30s as they were this year. It is truly a great way to experience the Midwest winter weather, and allows for runners of all abilities to tackle whatever distance option they would like.