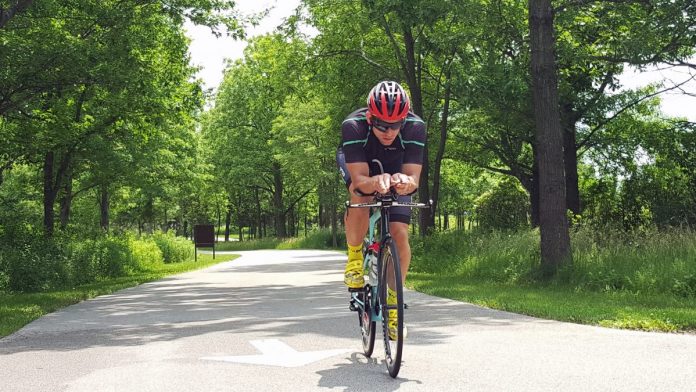 Boulder, San Diego, Tucson, Austin, Central Flor- ida: When triathletes think of ideal training locations, these are usually the first places that come to mind. Most have great weather almost year-round, wide-open roads with little traffic, and long climbs to really test your fitness. It’s no wonder that most of America’s top professional triathletes call one of these places home, with the overwhelming majority residing in Boulder during the summer months.

But the fastest American Ironman finisher of all time prefers a much different training environment, one that his fellow professionals would likely scoff at. According to Andrew Starykowicz—the only American ever to break the eight-hour mark in an Ironman—Wauconda, Illinois, is a triathlon paradise.

Starykowicz (pronounced “star-kuh-witz” but known to most in the triathlon world as simply “Starky”) was born and raised in nearby Long Grove and has lived in Wauconda for the past five years with his wife, Jill, who is an Ironman finisher herself. The pair settled on Wauconda in part because of the accessibility to hush country roads for riding and seemingly endless trails for running.

“I didn’t want to live in a place where I had to get in the car and drive in order to find a good place to train,” he says. “From where we live I can head north, northwest, straight west or even southwest and find great riding.”

No, it’s not the name of a country band you’ve never heard of, it’s where Starykowicz claims you’ll find some of the best cycling routes in the entire world. Along the state line are the roads that have turned 6-foot-2, 180-pound former water polo player into the fastest cy- clist in the history of triathlon (his ridiculous 4:02:17 bike split at Ironman Florida in 2013 still stands as the fastest 112-mile ride in Ironman history).

“If I’m going to get some big miles in, then it’s usually right along the border between Illinois and Wisconsin,” Starykowicz says. “I think the longest I’ve gone from home is 65 miles straight west, then I just dropped down a couple of country roads and find a parallel road to head home.”

Starky’s favorite long ride starts by heading northwest from Wauconda toward the neighboring town of Volo on State Road 26. From there, he can take any number of traffic-less country roads to parallel Route 120 and continue to the northern tip of Wonder Lake, where he turns to head straight west. From Wonder Lake to Hartland he can ride 12 miles straight along Thayer Road without once having to worry about using his brakes and he can count the number of cars he passes on one hand. Once he gets into the town of Harvard on Mc- Guire Road, he’ll start to head southwest along Flat Iron Road toward the outskirts of Rockford. After a quick loop around the tiny towns of Belvi- dere and Timberlane, he’ll hop on State Route 30 (Woodstock Road) for a 35-mile straight shot back to Wauconda. The entire ride covers 105 miles with just over 2,500 feet of elevation and is one of his staple rides when he’s getting ready for events like the Ironman World Championship in Hawaii.

“Where my riding starts is where most people from Chicago’s rides end. If they want some hills they’ll head to Barrington, but the real hills are all farther north,” he says.

“I have sections of road that are 30 [kilometers] straight where I don’t have to worry about ever touching the brakes. It’s a little different from racing from stoplight to stoplight on Sheridan Road.”

RIDING ON AND OFF THE GRID

For Starykowicz, one of the best parts about training in Lake and McHenry counties is that almost all of the county and farm roads are on a grid system, so getting lost is nearly impossible as long as you have a decent sense of direction. Once Starykowicz gets west of Highway 47 (which runs straight through Woodstock), he knows he’s on the grid so he can
turn down an unfamiliar road without worrying about getting lost.

“Living on the grid system is pretty cool,” he says. “I can turn on pretty much any road and know exactly where I’m headed, so it’s not like I have to ride the same roads over and over again.” Those of us who spend most of our miles riding up and down the lakefront path might appreciate such a novelty.

“I really like doing long rides on my touring bike. I’ve got 30 [millimeter] tires on it, so when a road turns to gravel I just keep riding.” he says. “That’s a lot of fun. I do a lot more gravel riding than I ever tell people. I think it really helps you build strength.”

One of the big secrets to Starykowicz’ success is his ability to do nearly all of his running on trails, which helps him stay injury free and maintain consistency in his training.

“Our house is 100 meters from a great crushed limestone trail. I’m able to do at least 90 percent of my running on trails.”
Starykowicz’ small neighborhood is surrounded by a two-mile loop of crushed limestone, which he treats as an extra-long track for doing speed work. For longer runs, he’s able to connect to the still-under-construction Millennium Trail, which connects a number of the forest preserves between Lindenhurst to the north and Mundelein to the south. Alternatively, he can head southeast from Wauconda to connect to the north end of the Des Plaines River Trail at Half Day Forest Preserve in Vernon Hills. According to Starykowicz, he can easily get in a 20-mile run from his door with only two or three miles on pavement. If you’re looking for a break from pounding pavement in the city, it might be worth a trip up north to treat your legs to a little trail training.

For dozens of maps outlining Starykowicz’ favorite rides and runs, follow him on Strava so you can steal a few routes for your own Ironman training.