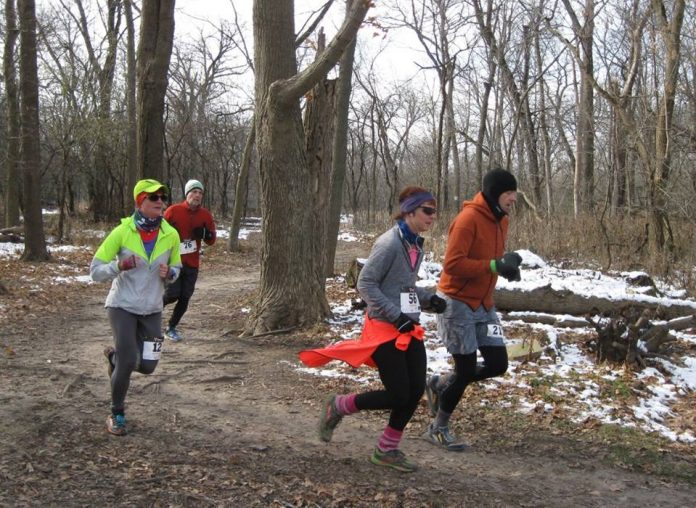 The last Universal Sole Trail Challenge race of the year was held on Saturday, through the Schiller Woods West Forest Preserve up near O’Hare Airport. It was an easy drive on a Saturday morning and a nice change from their previous trail challenges which were both held at the Wolf Road Woods in the Palos Forest Preserve System.

The lollipop-shaped, out and back, race was a little over 4.5 miles and wove through the forest preserve trails, including several steep inclines and declines through patches of packed down snow.  With a race start time of 10 a.m., this race had a very relaxed feel to the start line, albeit a chilly start line.

I am not an experienced trail runner and normally prefer a flat, fast road race to anything that takes me through sticks, rocks and dirt trails. However, the Universal Sole Trail Challenge is truly one for all runners, regardless of your trail experience or ability. The organizers provided fair warning of the anticipated ice patches and warned racers to stay upright, rather than aim for a PR.

Universal Sole Running Store in Chicago recently earned the 2016 National Community Involvement Award for being one of the most community-driven stores in the country and it was easy to see why; the race organizers were diligent in their organization and full of positive encouragement, despite the cold temperatures and impending snowstorm.

Rather than a typical race swag t-shirt, racers received a Universal Sole Trail Challenge pint glass to enjoy their post-race beverages. Race finishers were also treated to a bowl of homemade chili and a cold brew. Cliff bars and bananas were also available for those that craved a smaller post-race fare.

This race will take you right back to your cross country days, so if you are feeling nostalgic for those trail packed days of past, set your calendar for this race series next fall.

The Universal Sole Trail Challenge Series featured three races, one each month from October through December. Each race offered a different piece of swag, with additional race swag given to racers who participated in more than one race.  Keep an eye on the Universal Sole website and social media for details about their 2017 Trail Challenge Series.