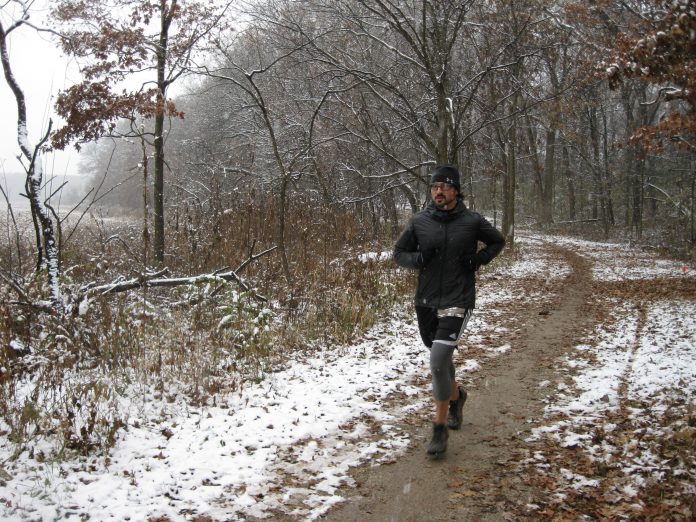 Those were the words of the day at the November edition of the Universal Sole Trail Challenge. USole always puts on fun events with a laidback attitude and its trail races match that description to a T.

The November race returned to Wolf Woods again this year and the hilly, rocky course had an extra bit of technicality added as early morning snow made the mud slicker and the footing more unsure. The race was even delayed a couple minutes due to a truck accident on the highway, allowing a few impeded runners some extra time to traverse the roads.

Runners had the choice of running one loop or two for a 4.2 or 8.5 mile race. Since both races started at the same time, there was no way of knowing who was running which distance, unless you asked. The front group started the first mile or so at a relatively slower pace, giving themselves some time to check out the course and see how the conditions would affect their effort level for the morning. After that, the pace picked up and runners bunched into packs as they navigated the trails.

Only a couple of runners from the front group ran the shorter distance. With the snow still coming in large flakes, if you ran the second loop, you had a chance to figure out your place in the race by looking at how many new footprints we created on the freshly fallen snow. Keeping a sharp eye out for large rocks and roots was imperative and there were several sections that were even more slick with mud the second time through due to all the runners from the first lap. Mud spread all over your shoes and flew up your back as you skid and hopped from one foothold to the next.

At the end, runners were awarded with Will’s Famous Chili, beer, and Clif Bars at the finish line which warmed the body right up. When you attend multiple USole trail races over the years, you see a lot of the same people coming back race after race. The comradery shared amongst competitors is visible before, during, and after the race and all look forward to the time they meet again, usually a month later. (In this case, the next Trail Challenge Race is in December at Schiller Woods.)