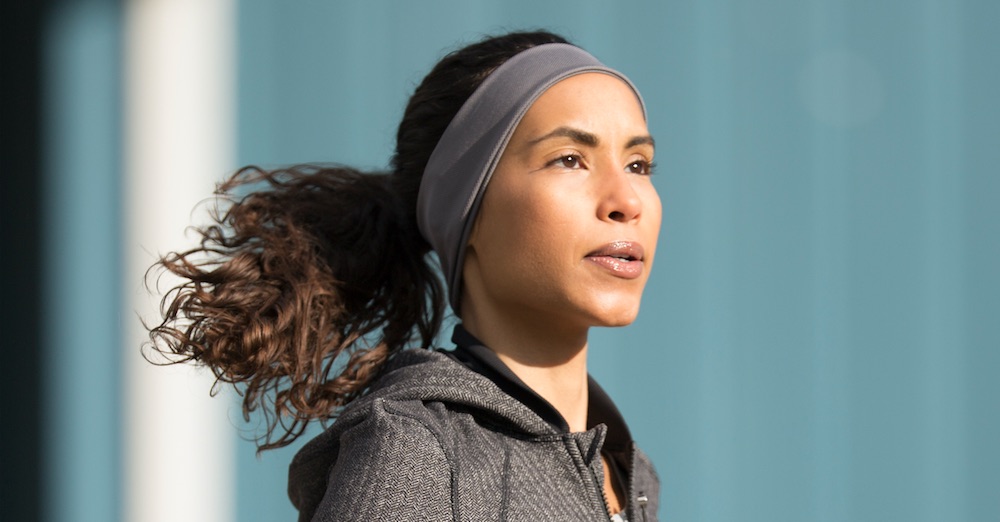 Often times, runners spend half of a run fidgeting with headphones, making sure they don’t fall out of their ears or get tangled in their armbands, and honestly, listening to music can be more of a nuisance than a convenience.

That’s where RunPhones step in.

It looks like a standard moisture-wicking headband, but inside are two little speakers that are placed right by where one’s ears would be, and via Bluetooth, runners can enjoy their tunes chord-free.  Not only is this set-up more comfortable, but it’s also safer because users can hear their surroundings better without having a bud clogging their ears.

Originally, I got these headphones to include them in our annual Holiday Gift Guide; however, they seemed like such an obvious solution to the “earbud power struggle,” as the RunPhone website calls it, and I wanted to do a more in-depth review.

Actually, I’ve had these for a couple of weeks, but they always seemed too complicated to set up before a run, that I’ve put off using them. I was completely wrong, though. After the battery (a small stick that plugs into a chord inside of the band) is fully charged, all you have to do is plug it back in, and pair your device via Bluetooth. As someone who uses Bluetooth every day in their car, it was almost a no-brainer.

I tried them out yesterday, and because the weather was just a little chilly, these headphones also served as earmuffs to keep me warm, and a headband to keep my hair out of my face. They definitely get an A+ in functionality.

Once I got my music to play, I put them on my head and realized the speakers move too! I was able to adjust the headband to first fit my head comfortably, then move the speakers to perfectly cover my ears. Although they moved around a little bit throughout the run (and the headband slid down a little too, but I think I have a weird-shaped head), it was a much easier fix than trying to catch an earbud mid-air and shove it back in your ear.

I was also really impressed with the sound; the website claims that music can be streamed up to 30 feet away, but I was running much further than that, so I still had to bring my armband to hold my phone. Maybe it was because my phone was only about a foot away from the speaker, but I never lost connection, and the sound was so clear it felt like Justin Timberlake was actually singing in my ear (a slight stretch, but still, great quality speakers).

Overall, I was really happy with the way RunPhones worked – I can see myself using them more often, especially for longer runs when I don’t want to mess with my old headphones. The only downfall I saw was that the headband material is kind of thick, so I don’t think I’d be able to wear them in the summer without sweating even more than I already do, but they are great for fall, winter and spring. Plus, the speakers are removable so you can wash the headband after a few sweat sessions, and the battery is supposed to last for up to 13 hours!

The Wireless RunPhones are available in four different colors in small, medium and large for $99.95. Don’t want to mess with Bluetooth? You can also purchase Corded RunPhones for $39.95, in eight colors.