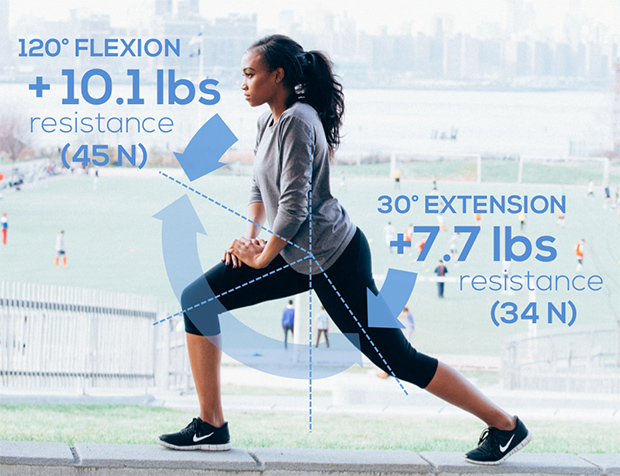 “A pair of pants that feels like you’re working out under water,” was the ad that I saw on Facebook one day. The brand was Physiclo, and though I’ve never heard of them, I am never opposed to trying new workout apparel.

After doing a little investigating on its website, I instantly wanted to try a pair of Physiclo’s resistance pants; the pants have built-in resistance technology along the butt and through the hips and legs to act as weights when running or doing other exercises.

Because the pants were designed by Olympian athletes and a group of medical students, I knew they had to be legitimate. I also found a few studies on the pants, proving their effectiveness: when wearing Physiclo, runner’s had 23 percent greater muscle activity in the hamstrings and quadriceps, and there was an additional 9 percent increase in heart rate and 14 percent more calories burned.

A more in-depth study focused on marathon runners, which I thought was really interesting. Physiclo tracked 37 runners who were training for a road race, half of which were given a pair of resistance pants to incorporate into their training. After 10 weeks, runners with the Physiclo pants ran an average of 7 minutes and 53 seconds faster than their personal bests, or a 4.2 percent improvement, compared to those without the pants, who ran slower on average.

While many times I go for a run to just clear my head and get some cardio in, I thought it would be nice to have that extra weight sometimes to tone my legs. Each pair of pants adds 10 pounds of force in hip flexion, extension and abduction. For someone with bad hips, I could use anything to make them stronger.

I ordered the cropped pair of Physiclo, so I could wear them more year-round. When I first opened them up, I was surprised at how heavy they felt, and was a little nervous to try them out. Despite having 10 pounds of resistance bands built inside, when I put the pants on, you cannot tell at all – they look just like normal tights!

I took my Physiclo’s to the gym for the first time and hopped on a stair master; instantly I could feel the difference as I took my first steps, and while I usually do about 30 minutes on the stair stepper, I could only do 20 as I was exhausted – my heart rate was definitely up, and doing squats later that day was very difficult.

I tried the pants for a second time on a run, to see if they felt any different to how they did on the stairs. My plan was to go about three miles, but again, I was forced to cut my workout short due to the additional effort required by these pants. After two and a half miles, I felt like I just did five. The next time I ran though, it did feel easier after wearing them once.

Because there is so much built into the pants and they are pretty heavy, they were very hot to wear especially on the day I ran outside. However, the material is moisture wicking and machine washable, which is good for those especially sweaty days.

I can definitely see how Olympic or elite athletes would rely on resistance pants such as Physiclo. If I were to wear them more regularly, I really do think I’d see an improvement in not only my running speed but my form; when I was running, I found myself focusing more on my posture to keep me going and feeling strong, and utilizing my stride to get me further.