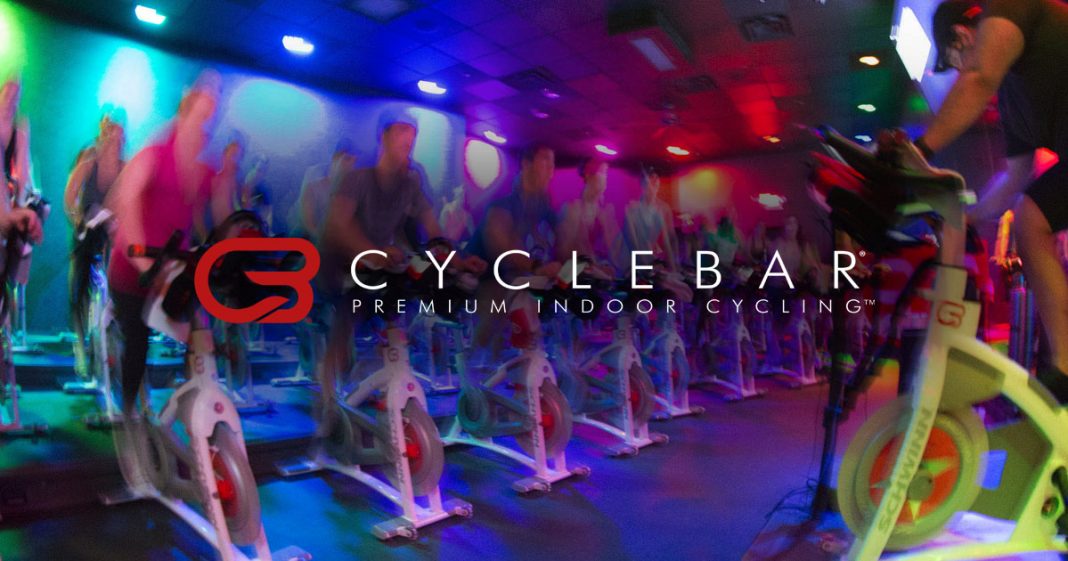 CycleBar is a spin class that’s becoming more and more popular across the country, and is the “world’s first and only Premium Indoor Cycling franchise,” according to its website. The Evanston location is Illinois’ newest studio, and there are also locations in Oak Park and Burr Ridge.

The Evanston studio reminded me a lot of other studio classes I have attended recently; it was modern and clean, and the locker room was decently spacious and had snacks and water for everyone to take freely. Shoes and towels are free for everyone, and all riders received a complimentary CycleBar water bottle to fill up and use during class and keep for themselves – I’m a sucker for free stuff.

Like SoulCycle, we picked our bike number during the online registration, so when I entered the studio I found bike 17, set it up to my liking, and rode slowly until class began. The room was absolutely freezing, but I knew once the class started, I wouldn’t be cold for long.

On my bike handles was a four pound, weighted bar, which I then realized what the class name actually meant. I was excited to use that, because I usually find getting a full-body workout in a spin class to be difficult.

During the warmup, our instructor explained how to use the monitor on the bike to evaluate our RPMs, resistance, time and distance. She showed us that all of our devices were linked to the front screen, where she would occasionally show us our data and use that as motivation to work harder. She mostly used this feature during our sprints, which I really liked because I tend to slack during sprints, but seeing my name towards the bottom of my list brought out my competitive side to spin faster.

In fact, my favorite part of the class was the monitor because it quantified resistance in a way that I never saw before; instead of yelling out “one full turn to the right,” our instructor would tell us to hit level four, which was moderate resistance. While every athlete is different, and working out is a personal activity, I think this feature makes a rider more accountable and consistent in effort.

Also in the studio was a DJ box, and as stated on its website, CycleBar utilizes a music library of millions of songs to help keep the class energy high. It was kind of funny to see our instructor going back and forth between the DJ box and her bike, but it was unique and added to the experience. She also would change the lighting in the room to coincide with the music and exercise we were doing; CycleBar is all about “setting the mood” which I really enjoyed.

Overall, the class was pretty challenging; I think most of the riders were first-timers like me, and the instructor seemed to provide a good mix of exercises. We switched off with hill climbs and sprints for most of the class, using the music as our timer. For one entire song, we did different combinations with the weighted bar, and although it sounds like it’d be easy, four pounds gets heavy pretty quickly! I was definitely sore from that part.

After the class was over, data from our ride was directly emailed to us. This seems to be a feature a lot of studio classes are picking up on – I was first exposed to it during my Orangetheory class – and I think it aids in prolonging motivation after the class is over; I didn’t see my stats until I got to work that day, and it made me think about my workout again, rather than just brushing it off once I was done.

I think CycleBar does a great job differentiating themselves from the standard spin class; it has a more “hip” feel both in and out of the studio, and adding in the arms component gives the workout more variety. If I were looking to join a cycle studio regularly, CycleBar would definitely be high on my list.

If this sounds like the class for you, they are currently offering 10 rides for $100 – what a steal!