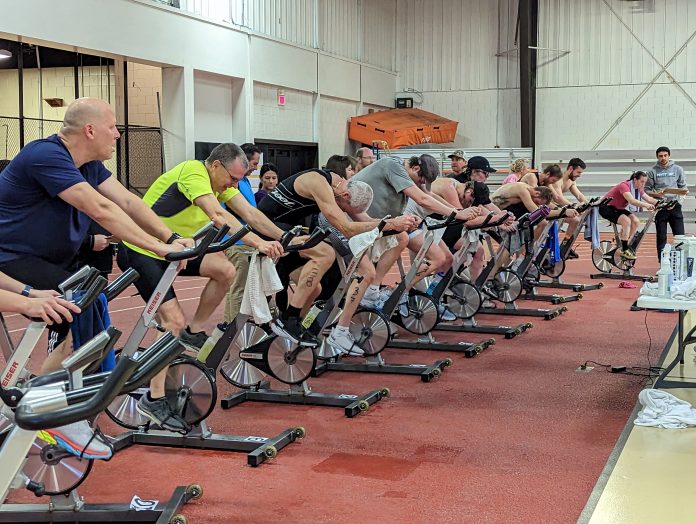 As we are into the first month of 2023, many athletes are looking forward to a year of racing without the restrictions of the past couple of years because of COVID-19. Many races were cancelled in the past few years or put on hold and now are looking forward to athletes coming out in full force.
One race that had taken a hiatus during COVID but is now back is the “St. Charles Park District Indoor Triathlon”. This is a local, indoor event for athletes that took place this weekend on Sunday, January 22, 2023.

St. Charles Park District Indoor Triathlon is very much a family orientated event where athletes of all abilities participated.  This unique event has a longer distance adult race as well as a youth event that catered to youth aged 7 – 14 years old. 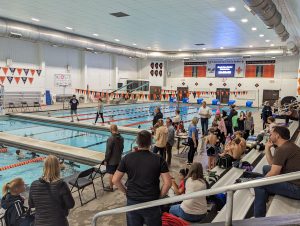 After the 10 minute swim, participants had 15 minutes to transition to the bike. Pre-race emails informed racers that the transition would take a few minutes because of the distance so we could familiarize ourselves with the route that went through a few St. Charles High School buildings. The route had signage to clearly mark where to go. Having done many indoor triathlons, a more lengthy transition is not typical, but the cool thing about it was 1) participants were given 15 minutes (which is more time than other indoor triathlons) and 2) it’s good practice for outdoor triathlons that have longer transition routes. 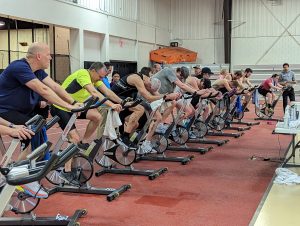 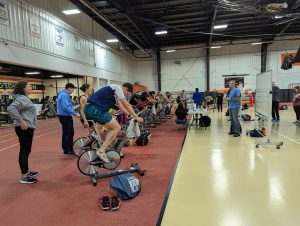 This race, like other indoor triathlons, was still based on distance in the allotted time, so as long as you were on the bike by the start of your wave’s time, you were good to go.
The bike and swim took place in the same area with bikers in the middle of an indoor track.  The row of 12 spin bikes were all cleaned and reset in between each wave with time for adjusting to prepare for the bike.

After the bike, participants had 5 minutes to prepare and transition to the run. The volunteers and counters for the run were very encouraging to help get racers to push through the final leg or the race.  After each wave, ‘USA Triathlon Indoor Multisport’ finisher medals were given to all participants. 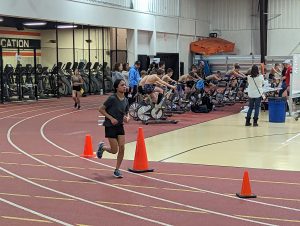 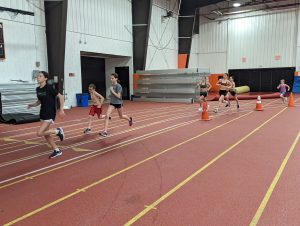 Of note: All proceeds from this race benefitted the St. Charles Swim Team and the Multisport Madness Youth Triathlon Team (MMTT). The race director, John Lorenz has been involved with MMTT for over 10 years. He is a certified race director and helps to organize annual events hosted by the team. John has competed in all distances of triathlon for over 20 years and has completed 9 Ironman distance races. I had the pleasure of meeting and speaking with John’s wife, Tracy, who worked today’s event and has also competed for over 20 years and has completed 7 Ironman triathlons.  If you’d like to learn more about MMTT, feel free to visit: https://www.mmtt3.org/