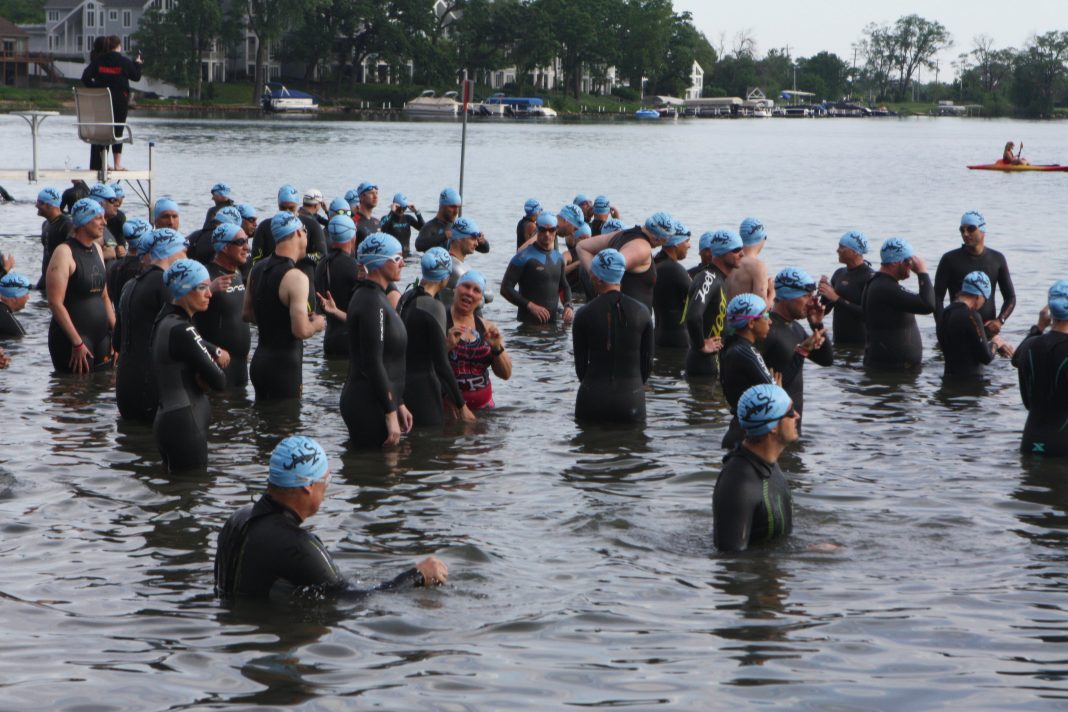 The first A Long Swim Event is June 3 in Lake Zurich. For more information on the events, visit http://alongswim.org.

Q: How did you first get involved with swimming?

A: I was a swimmer since I was a little kid; I started with the summer league team at the East Dundee Park District, and not because I was a good swimmer but because I had older sisters who were both really good and they had a lot of fun with it. I felt like I had found my niche; I swam at the Elgin YMCA through high school, and did pretty well. After college, once I started building a career and family, I would swim periodically at masters meets to keep my hand in it.

All of that was pool swimming, though; about 10 years ago, I started open water swimming, which is very different but very fun.

Q: Where did your idea for A Long Swim stem from?

A: Well, the disease ALS [Amyotrophic Lateral Sclerosis] hit my family pretty hard. My dad was diagnosed in 1994, but he ended up living 12 years, which is much longer than the typical time of three to five years. At the time, it was something my family knew nothing about, but he reassured us that it wasn’t the type that ran in families. After he died in 2006, one of my sisters was diagnosed. Turns out, she also lived with it for 12 years, and just passed a couple months ago.

Along the way, I started learning more about the disease and got involved with a couple of foundations. ALS is a narrow disease – it only affects about 6,000 Americans a year. Not a lot of people know about it, so it doesn’t attract medial funding often. It’s also a neurodegenerative disease, where the patient slowly starts losing function of their muscles. We thought because swimming obviously requires all muscles, it would be a good contrast; combining a niched sport with a niched disease. It was my sister who thought to capitalize on the acronym for A Long Swim.

Q: What does A Long Swim event entail?

A: It started in 2011 as an English Channel Swim, and we set to raise $50,000. Then, in 2014 we introduced our open water swim series. There’s three a year: one in Lake Zurich, one in Crystal Lake and one in Winnetka, which really helps those participating in the Chicago Triathlon prepare for swimming in Lake Michigan. Each event has four different swims during the day: a 1500-meter swim for those training for an Olympic triathlon; a 1.2-mile swim for half Ironman athletes; a 2.4-mile swim for full Ironman-ers; and we added a 5k swim.

Q: Have you had a lot of success in fundraising?

A: Oh yes, we’ve done a number of other marathon swim events, and we’ve raised over $500,000. What’s funny though, that because it is a narrow disease, most of the funding for research was raised privately through ALS foundations. But then, in 2014, came the Ice Bucket Challenge. We in the ALS world knew it would come and go, but it was an avalanche of money and awareness; it raised nearly $200 million in six weeks. The best part about it is we don’t really have to explain what ALS is anymore; the pace of discovery is accelerating so quickly.

Q: Why would you encourage triathletes to try out one of your swim series?

Most people come out to train because they want to get better at triathlon, and for most triathletes, swimming is their weakest sport. The number of training runs that a triathlete could go on are uncountable … and the cycling world is almost as packed, but for swimming, there are very few events. Everybody goes through the open water freak out factor – bumping around the corner marks and has their goggles ticked off – it’s just part of the sport. This is a great way to practice in a more controlled environment; we really limit the amount of swimmers we send off on a single gun, so you’re not overwhelmed by the crowd.

Q: What does the future of A Long Swim look like?

A: We’ve been negotiating with the city for almost three years to see if we can get one of our swims in the Chicago River, which is something that hasn’t been done in anybody’s lifetime. In fact, we discovered that in the old days, there were competitive swims there all the time, and the last one we could find was in 1908, which was the same year of the last time the Chicago Cubs won.

Another thing we’re doing this year is sponsoring a handful of triathletes themselves. We’re looking at 15 to 25 triathletes this year, and thought we could raise some money through it. We have a lot of enthusiasm about it now, so we’re hopeful this program will take off a bit.