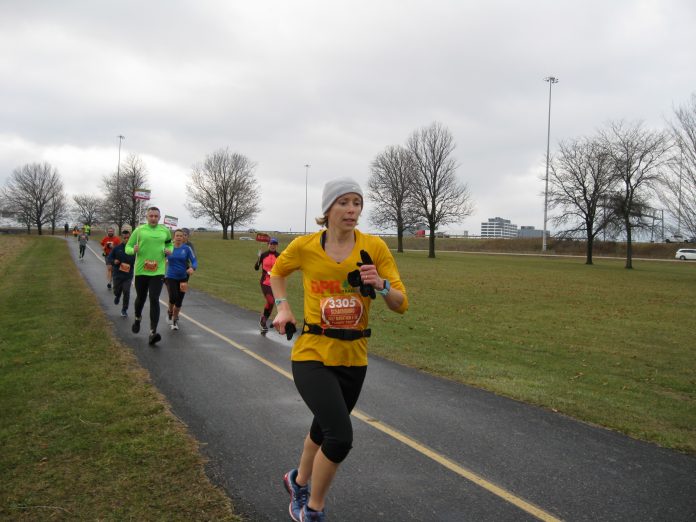 Towards the end of my marathon training, I heard a lot of people talk about how easy it is to lose the mileage and endurance built throughout the summer if you don’t continue to run. In year’s past, I use the holidays and daylight savings time as an excuse to be a little lazier, but this year, I wanted to avoid starting over again come spring. But, I knew I needed a race to work towards to keep myself motivated.

Considering that 13 miles was considered a cut-back week during the last weeks of training, I figured a half marathon was the perfect distance to make me keep running, but not stress myself about hitting extreme weekly mileage. Living in Elk Grove Village, I realized the All Community Events Schaumburg Turkey Trot Half Marathon was the perfect race to work for; it was close and convenient, and would help burn off all of those extra calories I consumed on Thanksgiving. Plus, Saturday races are way better than Sunday races, in my opinion.

I actually did the 5k of this event two years ago, and remembered really liking how it was casual and family-oriented, but also somewhat competitive. In August, I reached my goal of breaking two hours at the Milwaukee Striders Half Marathon, so I wasn’t going to put pressure on myself for this race time-wise. I just wanted to finish and feel good.

The 5k started at 8:30 a.m., and the half began at 9:15. While later than most races, it was nice to sleep in after the holiday yet still be done by early afternoon. The ideal schedule.

The half marathon had more than 1,000 runners, which was the perfect amount as most of the course was on the path of Busse Woods Forest Preserve. Any more would have been too crowded, but any less it wouldn’t have felt like a race.

Overall, the race went by pretty fast. The wind was brutal, there weren’t many crowds cheering (understandably so as the point-to-point course makes it hard for spectators to get around), and the few out-and-backs in the parking lots dragged on. But still, the race somehow seemed to fly by. Plus, having run at Busse dozens of times, it was nice that All Community Events strayed from the typical seven-mile loop whenever possible in order to keep in interesting.

Despite all of the conditions that seemed to be against me, I somehow managed to PR by 2:30! I definitely started out faster than I normally do, but was able to maintain my pace and finish sooner than I expected. It helped I saved my favorite podcast for the race to help distract me when things got harder.

At the end of the race, runners got chicken noodle soup and other snacks, and a medal. A quarter-zip shirt was also given at the packet pickup, which is really comfortable and I’ve worn it twice already. All Community Events seems to know what the running community wants, and delivers, especially at this staple suburban event.

An added bonus was running this race with the Busse Woods Running Club, who won both the Largest Team Competition with 120 runners participating in the event, and the best Team Name in the American Turkey Tradition Running Festival. We got a little shout out at the start line, which was very exciting! As a result of the competition, the club will donate $5,000 to the Northwest Special Recreation Association.

Overall, the Schaumburg Turkey Trot was the perfect race to end my season with. Now, I just need something to keep myself motivated for the rest of the winter, especially with all of this snow!