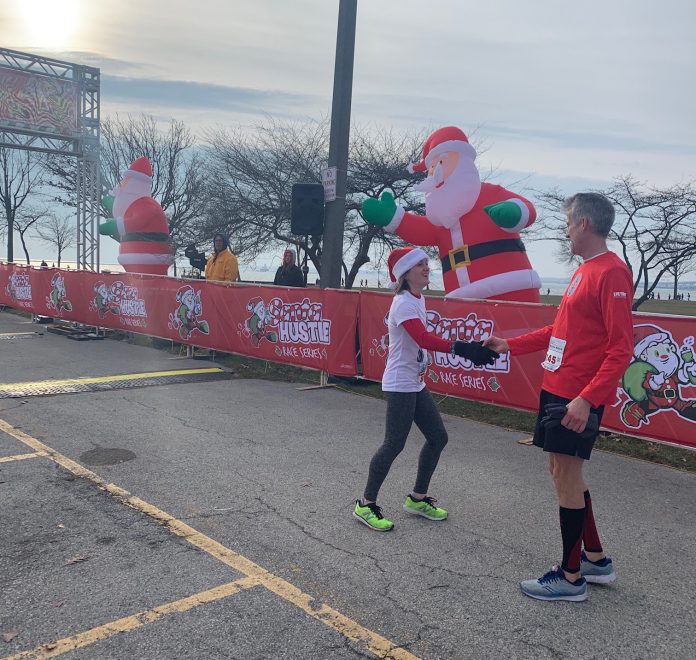 The popular Santa Hustle 5K took place this weekend in Chicago on Saturday and Milwaukee on Sunday. This festive race is the exact right way to kick off the holiday season. With great swag, lots of finish line amenities, and a well-organized course, our Santa hats are off to the Santa Hustle Race Series!

It is easy to see why this race series is so popular with thousands of Christmas-clad runners showing up at the Chicago and Milwaukee races. All runners had the choice of a Women’s Performance Black Full-Zip or a Red Unisex Performance Hoodie, both of which were high quality and will definitely be worn again. Runners also received a Santa hat and beard to celebrate the season.

I participated in the Milwaukee race, which took place at Veteran’s Park, along the lakefront trail. It was an easy hour north, plenty of lot and street parking. The race offered pre-race packet pick up, but since it’s a bit of a drive from Chicago, I took advantage of the race day packet pick up option.

I arrived an hour early, hit the packet pick up, and still had plenty of time to use the porta potties before heading to the start line. Unlike some 5K races, this one had pace flags, which helped the lineup, with such a large number of runners. As a faster runner, I greatly appreciate when paces are organized. It helps to avoid the first mile clutter, which always makes me nervous about falling over people.

The race began promptly at 9am and racers ran along the lakefront south for a mile, circled back to the start and ran the last mile north. It was a fun, double out and back course. The scenery was beautiful, but the winds were chilly. It’s always a give and take at the lakefront. Luckily Chicago runners are used to the temperature drop and winds that accompany the lake.

The course was well marked and there were several aid stations throughout, one of them even handing out bags of cookies! Even with such a large number of runners, the course didn’t feel overly congested.

After crossing the finish line, all runners were given a glittery metal and were greeted with lots of post-race goodies. And, of course a great DJ playing all of the Christmas classics.
I highly recommend this festive race for a fun way to start your holiday season!