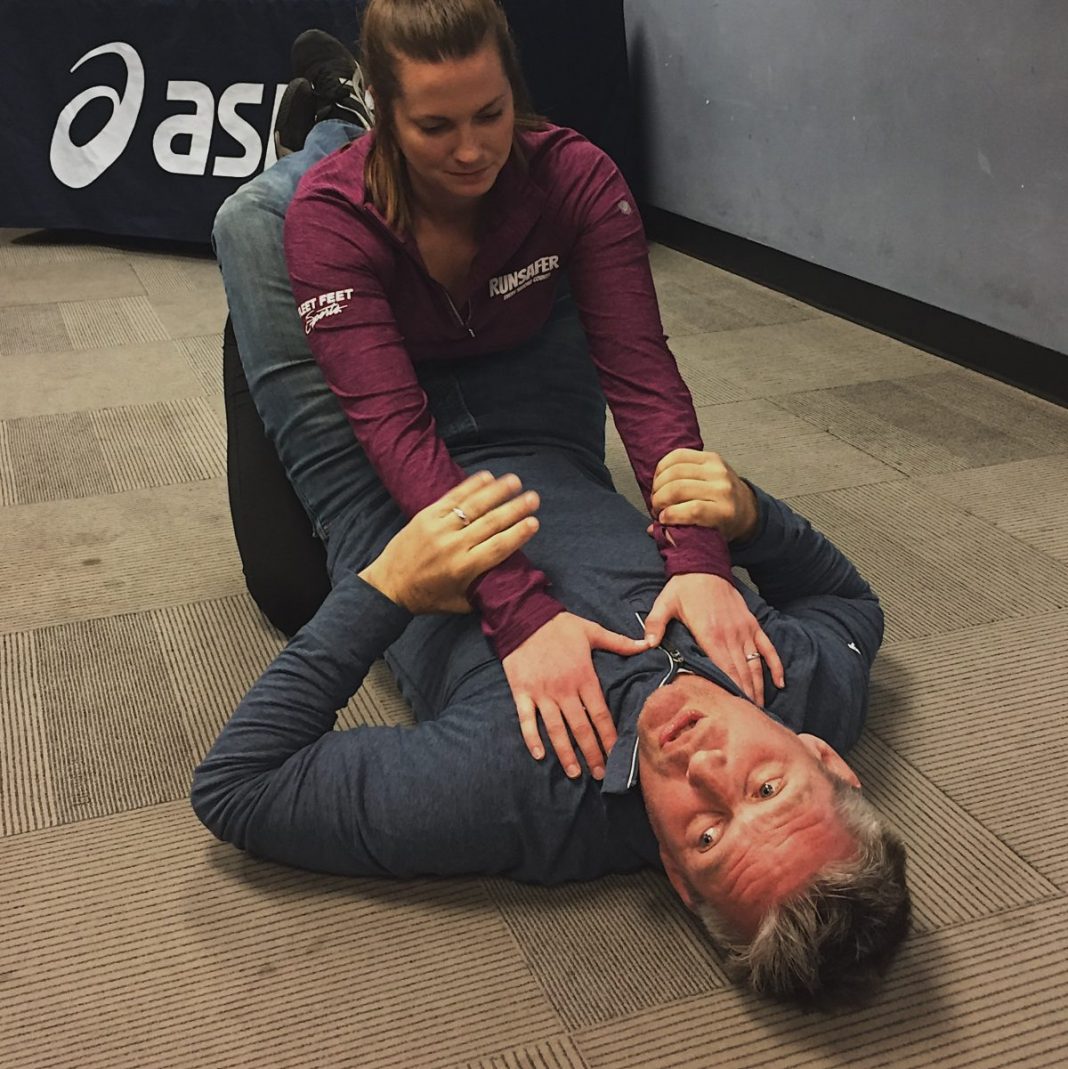 According to statistics, someone gets assaulted in the United States every two minutes, and in Chicago, attacks on runners seem to be an almost regular occurrence. Fleet Feet Sports wants to change that.

On May 6 and 7, two-time 10,000-meter Olympic runner and Brazilian jiu-jitsu black belt Todd Williams shared his expertise to athletes around Chicago. Hosted at three Fleet Feet Sports locations, ASICS’ RunSafer aims to teach runners and citizens alike self-defense techniques to build confidence and know how to protect themselves in any circumstance.

Williams launched RunSafer in 2012, but has been involved with jiu jitsu since he was a kid. Then in high school, he started running, which led him to the Olympics and eventually jobs in the running industry including at Adidas and now ASICS.

“That’s where I saw the need for safety in runners and walkers,” Williams says. “How many people are being assaulted and attacked when they’re out there, it’s not okay.”

Now, 400 classes and 30 states later, Williams continues to travel around the country to teach his 60-minute seminars, which includes demonstrations on how to defend yourself in five or six situations. He touches on grip breaking, ground techniques, handling an attacker from in front and behind, and eye contact.

The second half of the class, which Williams thinks is more important than the physical stuff, is where he shares safety tips to avoid the bad situations.

“I tell people to take the extra 20 seconds of time to make sure there’s nobody around, especially in an isolated parking lot or trail,” he says. “I also advise people to run in groups whenever possible; I’ve had people play devil’s advocate, and I’m not telling anyone what they have to do, but the risk is significantly higher if you’re alone.”

For those who do like to run alone, Williams suggests that if you are on an isolated path and you either see someone suspicious or are alone for an extended period of time, to turn around and wait for more people to populate the area. He also strongly advises against using headphones while running alone and choosing paths and gyms where there will be people.

He also reminds people that local running stores are there to provide resources, including information on group runs, safety techniques and more.

“No, I did not come up with all of these tips myself, but I’ve learned from my audiences too,” he adds. “We’ve become a RunSafer team, and every seminar I get good feedback that I can share with my next audience.”

Dave Zimmer, owner of Fleet Feet, is a strong advocate for having regular safety events for runners at its stores.

“I think presenting the athlete with the complete picture of what’s going on is more than important; when we look at the news and what’s happening in Chicago, giving very real information from a professional with established credentials is the way to go,” Zimmer says. “It’s not to scare people, it’s to make people aware; situational awareness while running is very important.”

Zimmer says that they host a RunSafer event annually, and plan to do something similar again before the end of the year.

“Having access to present to the public is an obligation of our business,” he adds. “Chicago area is the best running community in the country and we want to keep it that way.”

For those who couldn’t make it out to RunSafer, Williams encourages people to go on his website, as he is always sharing more safety tips and techniques. In fact, this July, Williams will post all of his techniques on his website for users to access for free.

“Even if you do the minimal amount of training, it will help you,” he says. “There’s other good martial arts too, as long as you tell them you want to learn self-defense, and not to break boards or compete. I just love jiu jitsu.”

In addition to technique, having safety equipment will only aid in your confidence, Williams says. Two products that he urges athletes to take a look at are WearSafe and GoGaurded.

After the ability to combine his two passions of jiu jitsu and running, Williams just wants people to be safe, and will continue to promote the RunSafer mantra throughout his career.

“The college student, the runner, the real estate agent; everyone needs self-defense training, because I don’t want anyone to be paranoid but I want them to be prepared.” Williams adds.

“No matter where you live, there are headlines about attacks on runners. Don’t be complacent.”