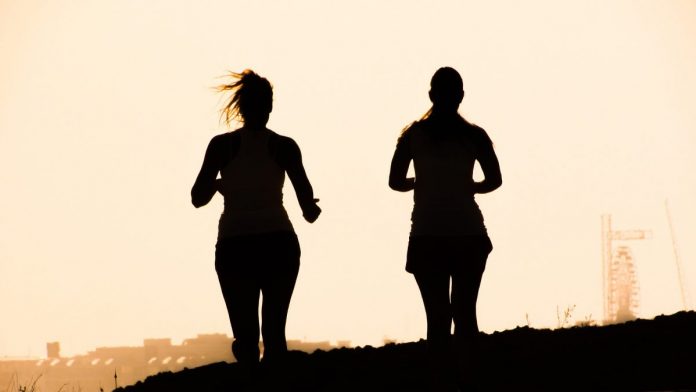 I’ve often contemplated whether I should be training on my own, with a friend or group, or doing a combination of both. There are pros and cons to both sides, and I have struggled to find what works best for me.

After running track and cross country for three years in high school, I became very accustomed to running on my own; while we frequently ran as a large group during practice, I was always solo on the course, which is when my performance mattered most. The sport of running is arguably more mentally demanding than it is physically, and I had grown very comfortable with what my mind was telling me I could do, despite how my body felt. When I did run with someone during a race, though, I found my mind doubting my capabilities based on the other’s performance.

Through college, I ran much more leisurely, participating in few races here and there, but a majority of my runs were done individually. Going out on the bike path near my off-campus apartment was my go-to place to clear my mind, and I never really wanted any company. I had formed my own routine, something that may be restricted if you’re committed to running with a partner, forcing you both to consider two separate schedules.

It’s also really hard to find a running partner with the same abilities and workout style as you; even if you just want to run together, usually one feels a little bit better, or has a little faster pace, making the other feel like they have to push theirs. While the extra push could be good motivation, it can also be draining, and being on the other end as the pace pusher, comes with it’s own frustrations. It always seemed like a loss to me, and I just preferred to run by myself, at my own pace.

However, after my half marathon last year, my opinion on this matter changed.

As I’ve mentioned in a few of my other posts, the 2015 Rock ‘n Roll Chicago Half Marathon was brutally hot, and I was not prepared for it whatsoever. Using the heat as an excuse, I did walk a little bit, and while I still felt accomplished at the end for finishing, I have wished ever since that I just pushed through the entire race. This is where I think a running partner would have helped me.

I have since realized that my above thoughts were incorrect; just because you start running together, doesn’t mean you have to finish side-by-side. Regardless if it’s just a Saturday morning jog or the biggest race of your life, it is YOUR run, and you have to do what’s best for yourself. But having a partner for part of it may help you achieve goals faster than you would have on your own.

Not only does running with someone give you the extra push and motivation you may need on a bad day, but it’s also a lot safer. While many runners prefer the isolated bike paths to the clustered sidewalks in their neighborhoods, those paths also pose more opportunity for danger. In fact, a girl at my college recently got attacked on that same path I used to run on almost daily, and she was alone when it happened. Had she had a buddy though, maybe she wouldn’t have been bothered.

I’ve also found recently, after running with my friend Missy more often, that having someone else by you can be a good distraction for those not-so-great runs. During the week, we typically run on our own time as our schedules are pretty different, but we have done quite a few races together this year, and the ones where she was there were a lot better for me than the ones where she wasn’t. I really like having the option to talk to someone to make the run go a little faster, and also having somebody to bounce pace/training strategies off of.

And research supports my realization: according to a recent press release, 95 percent of people get in shape with a workout partner. Not that this statistic determines the right and wrong way to workout, but it definitely shows that many find the buddy system successful.

In fact, a new app called MUUV was created to match compatible running partners together. “The mission of the MUUV mobile app is to support people ranging from the avid athlete to the individual just beginning to exercise to find fitness partners and encourage MUUVment,” the press release says. The app uses GPS location satellite technology, with personal profile information, including age and workout preferences, to create a harmonious partnership. While I have a reliable running partner currently, I am interested to see how the app works, so I challenge someone try it out and let me know!

Missy and I are planning to do the Lifetime Chicago Half Marathon together in September, and as it gets closer, we are going to endure our long runs together too. We have already clarified that one will not hold the other back, but especially for the beginning, I’m really excited to have someone to keep me going this time; had I had a consistent companion during my half last year, I definitely think I would have been less inclined to take that walking break.