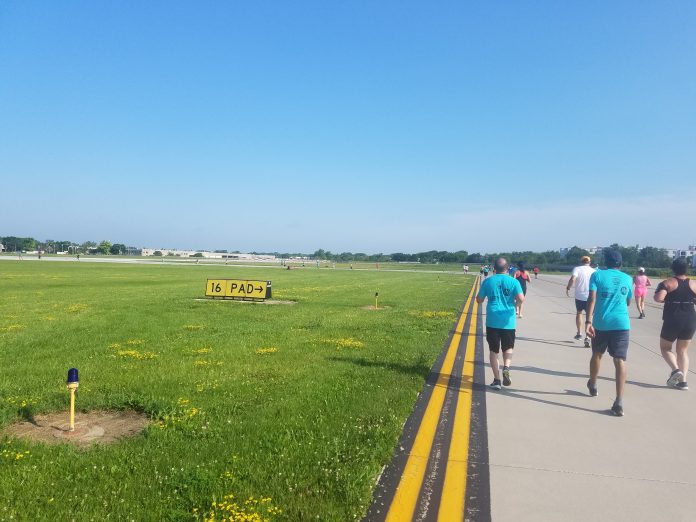 The Chicago Executive Airport in Wheeling hosted its fifth annual “Run the Runway” 5k and 1 mile walk on Saturday. This event provides a local charity with aviation-related scholarships and offers a unique opportunity to run or walk the tarmac at the fourth busiest airport in Illinois. It is also a USATF-certified course that attracts some elite caliber runners due to the fast and flat nature of the tarmac!

A number of local dignitaries expressed appreciation to the participants for showing up when temperatures were already well into the mid 80‘s. With no shade to be found on the course and high humidity, the heat index was certainly closer to the mid 90’s. Governor Bruce Rauner officially started the race by launching a flair to start everyone’s journey onto the runway.

It is an understatement to say the course was hot! I was hoping that at least the loop around the hangers would provide some respite from the beating sun, but there would be no relief; the buildings actually blocked any breeze that could cool athletes along the course. After reaching the turnaround that would take us back to finish line, we noticed an ambulance following the last of the 5k participants. It’s not often that the support wagon is also an emergency vehicle!

A number of volunteers provided much needed hydration at the only aid station. This “oasis” was a little further along on the route than the map had initially shown and they probably could have used a second one given the conditions.

During the final half mile, planes were beginning to taxi down the parallel runway. This makes the event truly unique. Many athletes took another walk break at this point to snap a quick selfie! I think most of us realized we would not be setting a personal best in the heat and just wanted to make the experience even more memorable.

I had been pacing with Julie Bradford for most of the run and we sprinted together for the line. It’s always fun to have a little competition at the end of a race, even when the pace had been less than what you expected. There were plenty of ice cold water bottles available after crossing the finish line. Medals were awarded to the first place overall finishers, as well as, those at the top of each age group.

This family friendly event actually concludes with a “Rock the Runway” festival later in the evening with live music, food trucks, fireworks & more.

If you are looking for a chance to PR on a fast, flat course, this is a must to put on your race schedule next year when temperatures may be more manageable!