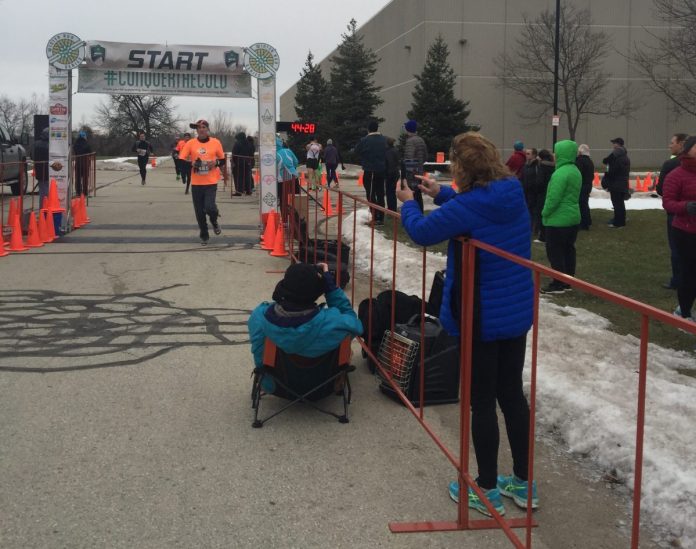 Lighthouse Events hosted their annual Run Into the New Year Race on New Year’s Eve in Franklin, Wis., just a few miles south of Milwaukee. An easy drive north, this race offered both 5K and 10K distance options and lots of NYE goodies including free beer, monster cookies and a 1,600 person champagne toast.

The out and back course started at the Milwaukee County Sports Complex and quickly entered the Oak Leaf Trail with a turnaround about a mile and a half north. Upon returning to the sports complex, 10K runners made a quick loop, grabbed water from the aid station and headed back out to the trail to complete the loop again.

The 10K race began at 8:30 am, with the 5K racers starting at 10:15 am, leaving plenty of running and passing room on the wide-paved trail. There were minimal ice patches, but Lighthouse volunteers providing warnings of upcoming ice or snow challenges. Just before the one mile marker on the trail, runners crossed the infamous bouncy bridge, a wood-planked bridge that gave runners a little bounce as they crossed it, taking us all back to our schoolyard jungle gym days. The finish line was complete with a cheering crowd, fun DJ and the Lighthouse owner personally high-fiving every runner!

Race directors promised to deliver the highest quality experience for all participants and they certainly stayed true to their promise with this race. There was ample parking at the sports complex for the early 10K racers and a shuttle available to the later arriving 5K-ers.  Racers received moisture wicking, short-sleeved, technical t-shirts and a 2016 commemorative finishers’ beer mug that those of legal age could fill with a post-run beer. Remarkably, medals were awarded to the top ten finishers in each age group, a unique feature to this race series.

It is well known that runners do not need a reason to race, except maybe a fancy race t-shirt, but there is nothing quite like an organized race on a holiday. From turkey trots to firecracker runs, the party atmosphere amongst runners is like no other at a holiday themed race. Run Into the New Year is a great way to start your New Year’s Eve so be sure to remember this one for next year as you are planning your festivities.

Lighthouse Events is a race business specializing in road, trail, multisport, ultra, cycling and fitness events. Year round events are planned, including a Winter Race Series for those willing to brave the elements. You can register for their next race, The BIG Chill 5k / 10k on January 29, 2017 and check out the rest of their upcoming races at their website, http://www.racelighthouse.com/.