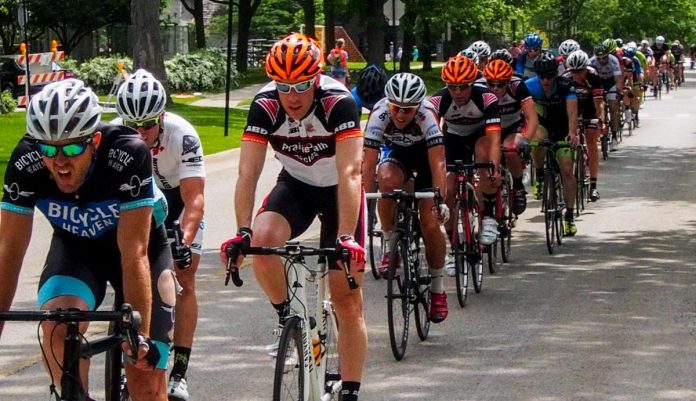 Some of the largest benefits you can have in the upper echelons of bike racing are to have good tactics and race
strategy. Once you start to feel more comfortable owning your place in the peloton, the racing literally becomes easier. This can certainly apply to any racing category, but moreso as the pace quickens in the faster ones.

Much of navigating the group is being confident and comfortable with your ability to read the wind as well as the ebb and flow of the group. This includes keeping your place in the peloton where others might be a bit more timid and back off. This doesn’t mean being overly aggressive, but it does mean being defensive.

My rule is if your handlebars are in front of theirs, it’s your spot. Many times this means when you are riding side by side with someone, all it takes is one or two more pedal strokes to fill in the gap in front of you, versus him or her. This then makes it easier to continue moving up while protected from the wind instead of having to go to the outsides and exposing yourself to do so.

You will learn to use these positional tactics and by using the group to your advantage. At this level, everyone is strong; yes, some racers have more bullets than others, but basically everyone can match everyone at least once. This means you have to be smarter than the next guy, and the next, and so on.

One example is when and how to attack, or create a move. Even if you are strong enough to ride off the front solo and dangle for a while, that doesn’t do anything for you, and you are only flexing your muscles for yourself. There are times where someone might bridge up to you, but it’s very hard to do it
this way.

No one cares how strong you are in races, but rather can you turn it into tangible results. Many make this mistake often, as it is hard to be selective with efforts, trying to rein yourself in while keeping in check. Aggressive racing is great, but use your aggression to your discretion.

Here are some guidelines, (not steadfast rules) for creating a break:
1. Attacking from the middle or back (or at least five wheels back from the front) and not off the front: You want momentum as you come past the front guys. You don’t want everyone to see your every move as you stand up and accelerate, since this will allow everyone to adjust to you instantly.

2. If you attack (or bridge), make it snappy. Some people consider themselves diesels instead of responsive
sports cars, but you need both. A slow ramp up for an attack or a bridge does no good when you need to spend more time in the wind, giving everyone behind you a chance to respond. You want to defeat people mentally when they see you go – don’t even give them the option to chase you. Be 50 feet out front before they can choose to let you go or not, essentially making the decision for them.

3. Use a bunch up to attack, and do not attack while the peloton is strung out single file. When you decide to attack while everyone is lined out in the wind, it’s not ideal. The pace will slow, and the group will bunch. A perfect situation would be if you are 20 riders back and it’s lined out. As it slows, watch as the front balloons up and then attack up the side. You will probably take one or two riders with you as well, leaving all the other strong cyclers that were just pulling at the front gasping for air.

4. Attack just before tailwind sections, not into a headwind. Think aerodynamics: you are being assisted by the wind, so the guy behind you is not catching that much more of a break.