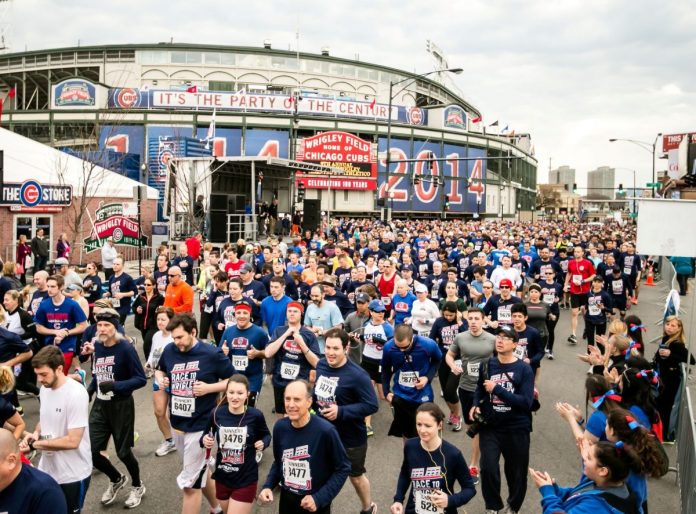 The Cubs are out of town this week, but that won’t stop baseball fans from descending on Wrigleyville this weekend. The 10th annual Race to Wrigley steps off from the corner of Addison and Racine at 8 a.m. Saturday, taking runners on a tour of West Lakeview while raising funds for Cubs Charities and The Ann & Robert H. Lurie Children’s Hospital of Chicago.

Among participants at this year’s race will be Brittany Arrieta, wife of Cubs pitcher Jake Arrieta. She participated in the race last year as well with several other wives of Cubs players and finished the race under unique circumstances.

“We kind of shut down the race as a group of wives,” Arrieta says. “We started last and had the police escort to reopen the streets behind us. It was quite the event for us, but it was fun.”

Arrieta says that she tends to gravitate towards workouts such as Pilates rather than running, but that the race welcomes runners of all abilities.

“Last year I actually pushed my kids in the stroller, and I know last year I saw people taking it to the extreme end doing the timed run,” Arrieta says. “Hopefully this year again we’ll see a complete mix of people trying to support the community, even if it’s walking or pushing a stroller or people who are training for an even longer race.”

In addition to giving runners the chance to explore Wrigleyville and Lakeview on foot, the race also offers a variety of fundraising incentives to help encourage participants to support the race’s causes. The event features four levels of prizes that include items such as an exclusive Cubs construction helmet, a Kyle Hendricks autographed baseball, post-game on-field photos with two tickets to the April 29 Cubs game against the Pirates and a post-race victory lap on the field with photos for those who raise $1,000 or more.

The Race to Wrigley this year includes a 5K fun run, 5K timed run and a new “Let’s Run Two” timed 10K. Online registration will remain open to April 24. To learn more about the race, the causes it supports and to register, visit www.race-rubs.com.