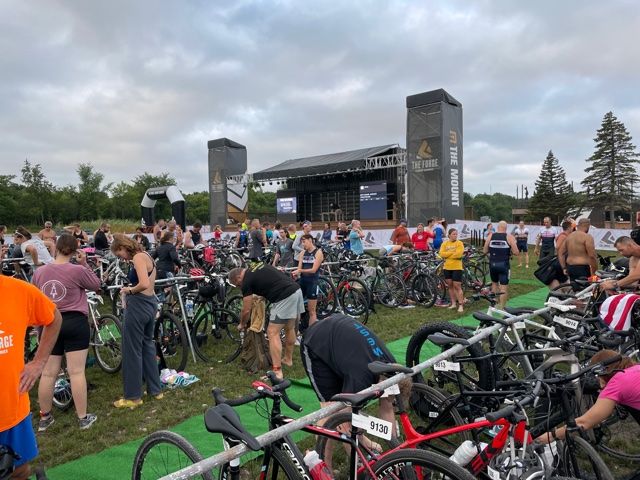 A gravel tri can sound intimidating to a triathlete who only has a TT (tri) bike. But The Forge Off-Road Triathlon is 100% worth borrowing a bike for as it was such a fun first-year event! The triathlon takes place in Lemont at The Forge which is an adventure park where you can zipline over quarry lakes, climb the country’s largest high rope challenge courses, play laser tag, cruise in a kayak or explore miles of flat hiking, running and biking trails. Before and after the actual triathlon, I heard many people talking about how they came out and rode the course on their bikes prior to race day and I do think this helped ease some nerves. I personally was borrowing a bike from a friend and knew I’d feel more comfortable if I was able to practice ahead of time.

Right before heading off, the National Anthem was played and a guy ziplined over the quarry with an American flag which was something so unique to see. The swim was in one of the quarries and was well-marked with buoys. Athletes entered their predicted swim time during registration and then self-seeded within their waves on race day, jumping into the water from the dock every 3 seconds. 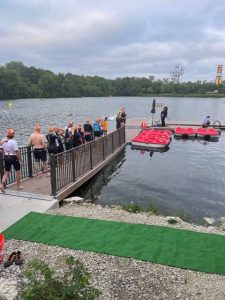 Transition was on crushed limestone but much of the path was covered with green carpets and athletes were allowed to leave shoes waiting at the swim exit if desired.

The bike was pretty flat and followed both crushed limestone and dirt/gravel road. It was not overly technical, making it doable for first-time off-road tri participants (which was the majority of athletes racing!). It was a two-loop 10.7-mile bike, but it never got overly congested. The volunteers were at the turns and the course was well-marked with cones.

The run headed straight out on a different crushed limestone path, turned around at Pollyana Brewing Company (a race sponsor!) and then weaved through the mulch paths of the adventure park areas before doing an extra out-and-back designed due to last minute rain. 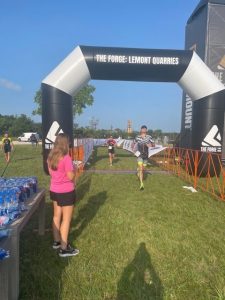 The post-race party was great! Athletes were treated to sausages, burgers, corn, couscous and beer while hanging out and greeting finishers. The awards were very unique as well, and a raffle was even held at the end of the race. Don’t let the words “off-road” intimidate you–definitely put this sprint tri on your calendar for next year as it’s open to ALL abilities (though don’t use your tri bike!) and is such a fun way to start a Saturday morning in July!