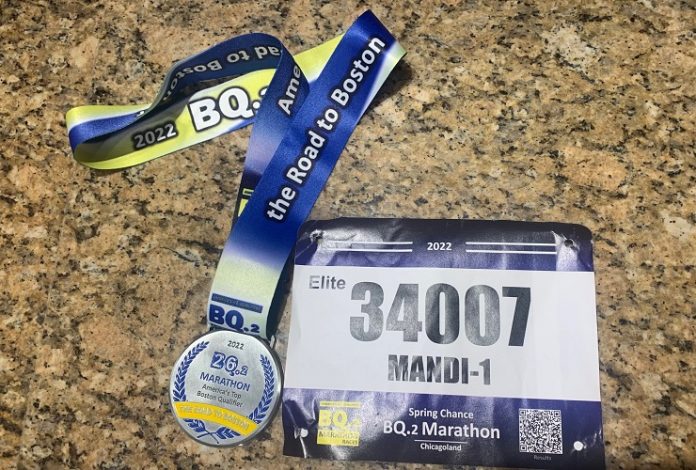 On Saturday, April 23, I attended the Spring Chance BQ.2 race in Geneva, Illinois. This pristinely done race has been crafted to give runners their best chance to earn a Boston qualifying time. Runners come from throughout the country hoping to get a time that will get them into Boston.

The race directors think through every detail. Parking is located across the street in a corporate parking lot. Upon arrival, runners crossed the street and pick up their packet, if they had not done the day prior. We then entered Race Village which was located in the Fabyan Forest preserve system in Geneva. There were several Porta potty‘s and runners were able to drop their gear before the start of the race.

This race is capped at 300 runners so that every runner can be watched and taken care of throughout the entire race. There is a time cap of four hours and 30 minutes, so this is not a marathon to sign up for if you are looking for a fun marathon experience. This is a high intensity, goal focused event.

Runners began on a new course this year with two side loops on the exterior, before beginning the main 3 mile loop. Runners completed the 3 mile loop eight times, passing aid stations twice on the course. All runners were also given the opportunity to have elite bottle station access at the start/finish line.

The energy was high, but also focused throughout the event. There was conversation on the course, but many runners were intently focused on hitting their times at each mile marker.

My favorite part this year was the pace team provided by Dick Pond Athletics. Unique to this race, pace groups were set four minutes under your goal time to ensure entrance into Boston. My Boston qualifying time is 3:40, so might pace team focused on 3:36. I had a fabulous duo of runners to start us off. They kept the energy high in our all female group with conversations, stories, and tips. I especially liked the constant reminder to grab hydration at every water station given that the temperatures were quickly rising to 80°.

Our dynamic duo switched out at the 14 mile mark and a new pair of Pacers came in with fresh legs and fresh stories. They took over our group and pulled us along through the last four loops, where we tackled the wall and the even higher temperatures and sunshine.

I am always extremely appreciative of the race staff and volunteers for the time and energy they put into making our day special at events. This is no different with this race. Race Director, Craig Bixler, made sure that this event was effectively done, focusing on every detail. The volunteers had high energy and kept us going. The Pacers were incredible with their guidance and support. And at this event, we even had the race guards. I’ve previously written a story about this incredible team here.

The race guards were out in full force, working hard to keep us safe on Saturday. With the rising temperatures, humidity dewpoints, and the fact that most Chicago runners were not heat activated yet, there were several injuries and runners who had to leave the course. Race guards were running in between injured runners making sure that everyone was taken care of.

It should also be noted that the race director pulled a high class move the day prior to the race. With the forecasted temperatures being so high, and the goal of this race being a BQ, he sent out a discount code for registered runners to sign up for the fall BQ, since race day weather was throwing curve balls to runners chasing their times.

As with all temperature acclamations, the heat came as a shock, especially as I rounded mile 15 through 18. It really set in that the heat was there to stay and I had to deal with it. For me, constant hydration and throwing water on myself helps to keep my core temperature down.

I ended the race with a BQ and was able to ring the bell. Supported by the pace team, volunteers, race guards, RD, DJ, and my fellow runners, it was an extremely successful and fun day. Congratulations to everyone who was out there on Saturday braving the heat and trying to hit their goal. And a huge thank you to the BQ last chance team that puts these races on. As a reminder, there is another one in September that you can sign up for here.