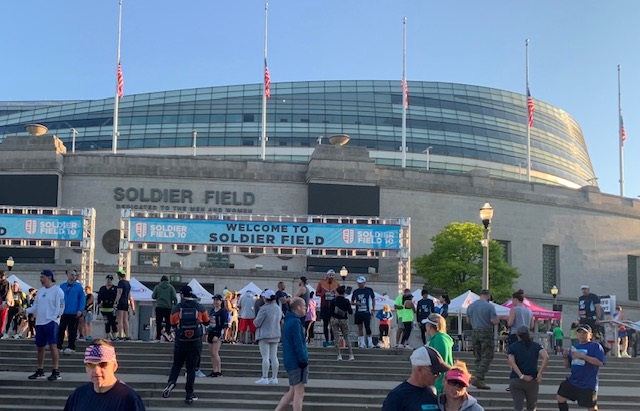 As a running community, we have let out a collective sigh of relief watching as most races have returned post COVID. When the announcement came out that the Solider Field 10 Miler was returning, I couldn’t have been more pumped. This has been, and continues to be, one of my favorite ways to start the summer.

This race is always held on the Saturday of Memorial Day weekend and this year was no different. At 7 am, thousands of runners toed the start line, waiting to hit the streets and LFT. This year, the race returned to it’s traditional start line outside of Soldier Field, with runners finishing on the field. In recent years, this had been reversed and runners began on the Field. I will say that the start on the Field seemed to go a bit more smoothly than the outdoor corraled start, however you can’t beat finishing on Soldier Field.

At the beginning of the race, the emcee honors those that have served and those that are serving in the US Armed Forces.

“The Soldier Field 10 returns to honor those who have made the ultimate sacrifice in service to America over Memorial Day Weekend in Chicago. Our annual 10 mile and 10K option take place on May 27, 2023, and will start with a pre-race playing of taps and a military salute. Both courses run south on DuSable Lake Shore Drive before looping back, with spectacular skyline views, along Lake Michigan to the finish ON the field at Soldier Field. There, you can take in the sights and then head outside for the post-race tailgate in the Stadium Green with free beer, live music, and more!”

The 10 mile racers took off first, with the 10K runners beginning at 7:30. All runners began south on LSD before looping back on the Lakefront Trail. It’s a simple course that highlights Chicago so well. There were aid stations along the course and high level of energy as we returned to large scale event on our city streets. 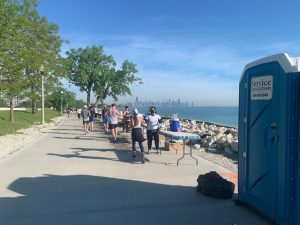 Runners circled back to Soldier Field and were routed through the tunnel leading onto the Bear’s home turf. We crossed the finish line as the mega tron screens captured our finishes and we were greeted with a finisher’s medal and lots of post race goodies. 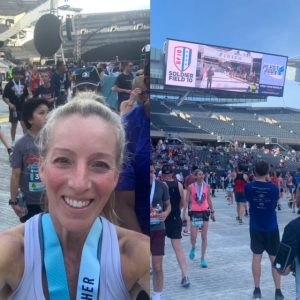 Parking at Soldier Field is easy and there are several lots that surround the field. For this event, parking was free, which was such a nice bonus to runners. It is a good idea to arrive early to this race, as there are thousands of runners and the start line is separated into pre-assigned corrals. The first few miles are crowded, but I was able to get my space by mile 3 and get into a good groove.

This event is such a wonderful way to kick off Memorial Day weekend. Registration is already opened for 2023 at it’s lowest rates, so check it out and get this one on your race calendar!