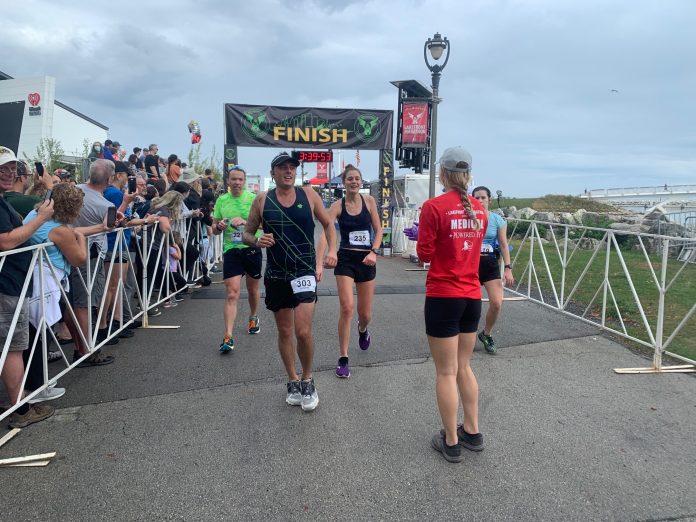 On Sunday, October 3, thousands of runners came out to run the Milwaukee Lakefront Marathon. This race is put on annually by the Badgerland Striders and proudly states the slogan, “For Runners, By Runners“.

And the race more than lived up to the slogan.

I have heard great things about this event but I’ve never had the opportunity to run it. This was my first year participating in this race, but it definitely won’t be my last.

2021 was the 40th anniversary of this race, which began in 1981. It’s longevity shows what an amazing event this is, as runners return every year to run the streets of Wisconsin.

This is a Point to Point 26.2, which is a difficult feat for race directors to tackle. The sheer logistics of transporting runners before or after the race is cumbersome. Not to mention the permits that have to be secured from every municipality, the road closures that need to be arranged with local law enforcement, and the aid stations that need to be in place. In an out and back course, aid stations can often hit runners at two points. In a point to point, this is impossible, so race directors have to find more groups to volunteer.

When executed well, a point to point is an incredible experience for runners. And Scott Stauske, Race Director for the Milwaukee Lakefront Marathon, executed this amazingly.

Runners parked at the Summerfest grounds in Milwaukee and were bussed to Grafton High School in Grafton, WI. Runners were able to wait inside the high school until the start time which was especially important this year, as heavy rain filtered throughout the morning. 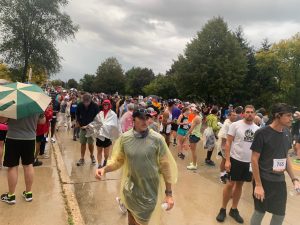 When race time hit at 7:30, runners crossed the start line and headed south to Milwaukee. 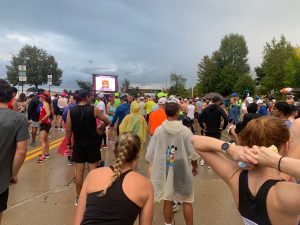 The trip included residential streets and lakefront views. Runners wove through the various municipalities from Grafton to Milwaukee making their way back to Summerfest.

What was most surprising to me was the amount of crowds that lined the entire course. I did not go a mile without being greeted by a large cheering crowd. Runners were able to select a name to put on their bibs, which meant that not only did we get cheers while running, we got our names called. What a difference it makes to hear “Go insert your name” when you are hitting the wall.

Aid stations were conveniently placed for runners, just about every 2 miles and there were pace groups for runners that enjoyed running with them. There were several points where runners were running alongside car traffic, but cone placement, police, and volunteers kept us safe and secure. 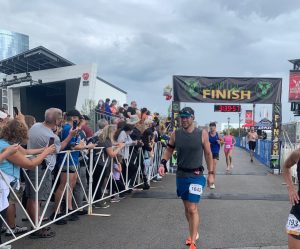 When we finished back at the Summerfest grounds, large crowds and music were there to greet us. There was also an extensive group of medical personnel that evaluated each runner and offered aid when needed. I felt so well cared for with my Mylar blanked and bottle of water that I hardly noticed the ENORMOUS medal that was placed around my neck.

After exiting the finish line area, I was directed to the Miller Lite booth where I was given a t-shirt with a replica of the 1981 shirt!

The very first Milwaukee Lakefront Marathon race occurred in 1981. The race entry fee was a whopping $3. There were 586 finishers, Miller Lite was the beverage sponsor and this was the only race held not in October. The 1981 race included Miller Lite race shirts.

If you haven’t yet figured it out, I LOVE this race and can’t wait to return in 2021. I highly encourage you to put this on your race calendar next year and join me.

A huge thank you to the RD, volunteers, and everyone who made this race happen. And an even bigger Congratulations to the race on its 40 year anniversary. Here’s to many more!