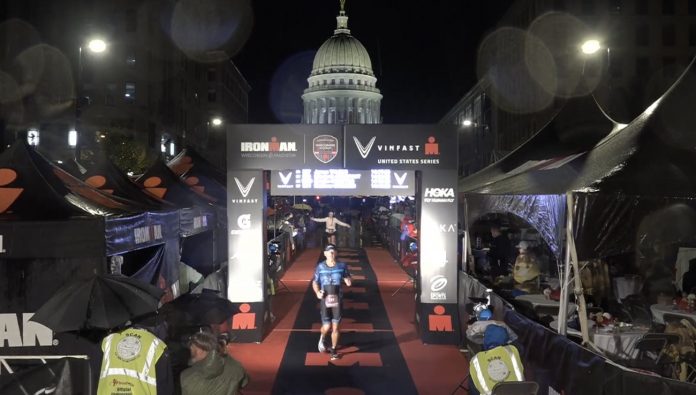 It may seem unconventional to begin a race recap with an apology, but in this scenario it seems appropriate. After too many races in a row with weather near or above 100 degrees, I prayed to every deity and supernatural force I know of to influence the forecast down to a reasonable temperature. In what became an obnoxious overcorrection, Ironman Wisconsin on September 11, 2022 was anything but hot.

Ironman Wisconsin 70.3 kicked off the day before, with a cool morning and warming temperatures into the early afternoon as most athletes crossed the finish line. As the day progressed, the air temperature dropped by the hour and dark clouds filled the sky. The rainfall began Saturday evening and would not stop until long after the last athlete entered the finishers’ chute after midnight on Monday.

I arrived in transition shortly after 5:15am on race morning, placed my bottles on my bike, and made my way into the Monona Terrace. For those unfamiliar with Ironman Wisconsin, it features a unique set-up where athletes enter a building between segments to find the transitions inside ballrooms, with gender separated changing rooms just off where the run and bike bags are stored. The scene inside the terrace looked like any Wisconsin race in the past, with athletes lining the hallways and edges of the ballrooms stretching, eating, and putting on their wetsuits.

To avoid overheating early in most races, I usually delay pulling the top of my wetsuit on until I’m closer to the swim start, but in this case, I was happy to have the added warmth of the full suit as I joined the herd walking through the cold rain down to the swim start. It was still dark as I walked down, and the ground was already muddy and slick. I pushed my way through the crowd to the appropriate self-seeded speed group and before I knew it, I was in the water.

The swim this year featured a two-loop course, with a timing arch a little before the halfway point to ensure athletes were completing the entire 2.4 miles. As is the tendency with two-loop courses, it was crowded. I had to pop up out of the water a few times to avoid the kicking heels of breast-stroking swimmers, especially around the turn buoys. On the second loop I came out a little wider and was able to find a clearer lane. Still, the swim in general was one of the most physical I’ve had in recent races. The chop on Lake Monona seemed to pick up a bit later in the swim, but it never felt unmanageable. And as many athletes have stated, it was the warmest I’d be all day. 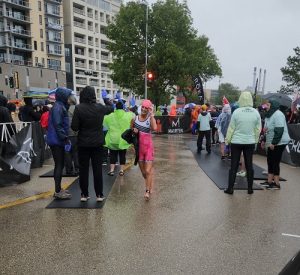 Upon exiting the water, I took advantage of the wetsuit strippers, who were a welcome site after being absent during Covid era racing. I jogged up the parking garage helix, wetsuit in hand, and ran into the ballroom to prepare for the 112-mile ride.

Here’s where the mistakes of the day come into play. I had looked at the forecast and saw rain and 60 degrees. I’ve trained in 60-degree weather before, even with a little sprinkle, and felt comfortable after warming up. My plan was to throw a cheap long sleeve bike jersey over my trisuit for the bike, thinking I would likely ditch it somewhere on the ride, and then just run in my trisuit. What I would discover on the ride though is that the temperature did not rise to the expected high, and the combination of the heavy, constant rain and 15-20mph winds made it feel much colder than expected.

The bike ride ended up being a brutal seven-hour journey back to T2. The Wisconsin bike route is a lollipop configuration, with a stick that takes athletes out to do two loops through the small towns west of Madison before returning on that same stick. The stick has been changed in recent years due to construction, adding more hills and elevation to the route. The loop features three large hills and a technical combination of more rolling hills and tight turns. There are turns at the bottom of inclines and turns into inclines where riders are starting the climb with no momentum. These elements make this a daunting course on a good day, and it’s never been a route where athletes can ever really settle in and cruise in aero position for long. Now, combine those challenges with 50-degree temperatures, high winds, and heavy rainfall and we have all the ingredients for a miserable ride.

Standing water was present over much of the course, slowing momentum and hiding the rough road conditions for which Wisconsin is notorious. I climbed slowly, cautious not to rock the bike back and forth too much on slick pavement. On the descents, I concentrated on gaining as much speed back as I could while keeping the bike upright. While descending I felt every wind gust blow straight into my core, and the rain was pelting my skin to the point I thought it had begun to hail at one point. I must have spent over half the ride shivering and trying to stop my teeth from chattering.

After finishing the second loop, there’s generally a feeling of relief on this course – a feeling of completion, even though there’s still the stick to ride home. As I took that left turn though, I was greeted with a massive headwind and the realization that the hills on the new route still awaited me. Those last 16 miles were downright nasty, and looking at splits for multiple athletes, it was the slowest split of the day for most.

It was slower than I planned, but I eventually completed the bike ride and made it back to T2. I’ve used the word “carnage” before at other races, but this was a completely different version. The inside nature of transition was both a blessing and a curse at this moment. It felt great to finally be warm – so good in fact that it pressed athletes to make a tough decision about leaving the comfort of the room to begin a marathon in the elements. Men were strewn about the room, slumped over in chairs shivering with looks of shock and defeat in their faces. I decided not to get too comfortable and worked to start the run quickly. As I was shoving my bike gear into my transition bag, a man turned to me and said, “I still can’t feel my hands or use my fingers. Can you help with my helmet?” So I removed the man’s helmet, pointed out the warm water they were serving, and got on my way out to the two-loop run course. 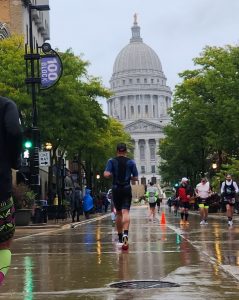 I started the run well enough, and was able to maintain a slower than usual, but steady pace for a while. I was trying to run hard enough to stay warm, while finding a pace I could maintain for as long as possible. Still, with wardrobe mistakes realized, I was freezing in my trisuit. Wind blew through the city streets and I’d shiver and clench up every time it hit me. I started the marathon as I usually do, relying on Coke and gels to get me through to the end. The saving grace though was the warm chicken broth, usually reserved for after dark, that was brought out onto the course early.

I ran well enough until about mile 15, when a gust of wind ripped through the course and went straight through my body. I must have taken a funny step while my body clenched up, because my left hip flexor decided to completely lock up on me. I was able to loosen it up but running became a major challenge after that. I walked/jogged the best I could and just tried to keep moving forward while the hip flexor issue came and went. At one point on the second loop, I was dragging my left leg up the hills on Observatory Drive and seriously questioning if I’d be able to finish.

The chicken broth, while it helped me stay warm, also created a new challenge. With the absence of sweat, the broth had nowhere to go, and I was eventually stopping at every aid station to use the bathroom. This slowed the overall pace and caused me to have to loosen up the hip flexor every time I started moving again.

Another observation from the run course – it just felt empty. Most Ironman run courses, even in the most difficult races, still have a crowd of people sharing in the same death march. The run course in Madison was a ghost town. I spent most of the course walking or jogging alone and would go minutes without seeing another competitor, even making a complete second lap of Camp Randall Stadium alone. At one point around mile 23, another athlete caught up to me, made a joke, and tried to start a conversation. As I shivered and walked the last couple of miles with my teeth and fists clenched, I was in no mood to chat. I smiled and let him pull ahead of me, just focusing on each step and counting the minutes until I’d be done. I felt terrible at the end of the loop when I was getting ready to turn toward the finish and I saw him take the right to begin another loop. Ouch. That guy needed a friend, but I was an absolute wreck of a human by that point.

While the bike and run courses were light on spectators, especially by Wisconsin standards, the finish line was rocking. I was too cold to really celebrate my way down the red carpet, but the crowd, music, lights, and Mike Reilly were all I needed to justify the fourteen hours of suffering in the rain and cold. I’ve seen varying numbers, but the last set shows that roughly 1700 people registered for the race, 1400 started, and 1020 finished. Ironman Wisconsin 2022 will live on the list of races with the highest DNF rates in recent Ironman history.

This was a redemption race for me, after not finishing Wisconsin (*cough* twice *cough*) early in my triathlon days. I’ve had Ironman successes since then but had been unable to get back to Madison for various reasons the last few years. Had I not been so determined to finally beat this course, there’s a great chance I’d still be in T2.