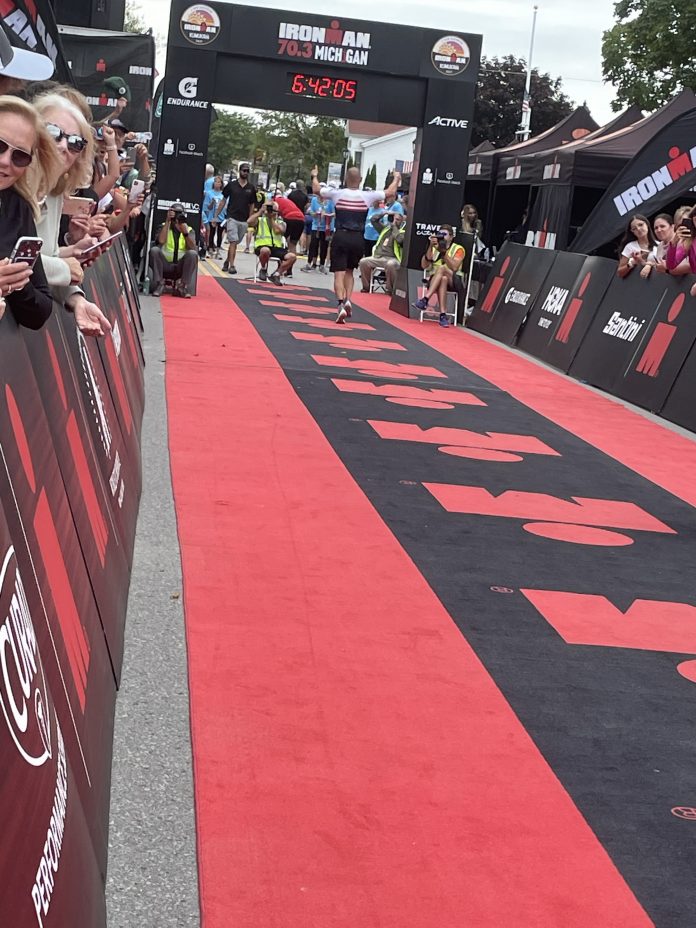 The drive north through Michigan to the town of Frankfort can easily make people forget they’re still in the Midwest. Tall pines and rolling hills soon give way to sandy beaches and the blue expanse of Lake Michigan. Point Betsie Lighthouse, operational since 1858, stands tall and attracts visitors and photographers year-round. Add in a quant downtown area with restaurants and shops and the town feels more like a Pacific Northwest vacation destination than a place so easily drivable from Chicago. 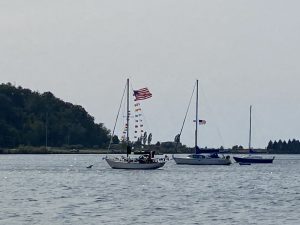 Roughly 2000 triathletes made their own journey to Frankfort to race the inaugural Ironman Michigan 70.3 race on September 12. The race featured a 1.2 mile swim in Betsie Lake, a 56 mile bike ride with rolling hills, and a 13.1 mile run around the lake’s shoreline.

Betsie Lake was a cool 68 degrees on race morning, creating a fast, wetsuit legal swim. Swimmers swam a single loop triangle with buoys on the left. The lake environment itself surprised many athletes. From the map view, Betsie Lake seems to be an extension of Lake Michigan, but the lake is actually fed by the Betsie River and then flows into Lake Michigan. Swimmers expecting cool blue lake water were greeted by a darker, more river-like atmosphere as they plunged their heads in with the first strokes. Seaweed was an issue, too, with swimmers commenting on weeds attaching to feet, goggles, and other extremities. Despite this, athletes seemed to enjoy the swim, grateful for the cool, calm conditions.

The bike was a single loop with two out and back sections. The largest hill appeared early at mile five, then the course rolled gently, with slightly more significant bumps around miles 14 and 30. The hills were just enough to break up the course, but for the most part this was a course that allowed athletes to speed through with heads down and consistent power output. The aid stations were well stocked with energetic volunteers, gels, water, and Gatorade. Views of the various lakes north of town and the tree lined roads were welcome distractions from the grind of the course. One last mean hill just after mile 54 challenged the legs a final time before the descent sent athletes screaming back down toward transition. 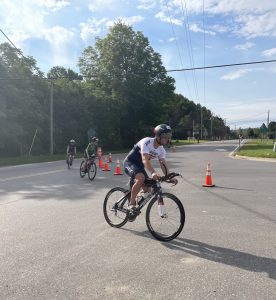 The run consisted of two out and back loops around the Betsie Lake shoreline. The run featured some gentle rollers, but nothing that would constitute a climb. To put it best, the course was fast. The sun peaked out early in the afternoon and added a little warmth to the exposed course, but it was never unbearable, and that sliver of warmth was soon pushed away as a weather system rolled into town over Lake Michigan. Many athletes were completing their 13.1 mile run with temps in the 60’s, cloud cover, and a brief cooling drizzle. The town of Frankfort really got behind this race, lining the course with cheers and providing everything racers needed at the frequently placed aid stations. 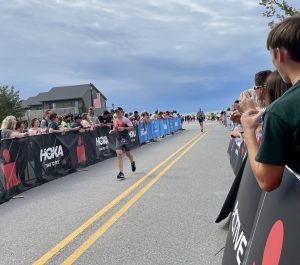 Ironman Michigan 70.3 was a race perfectly tailored for personal bests this past weekend, with a fast course, pristine racing weather, and a town excited to welcome the 2000 athletes plus their support crews to their beautiful little corner of the state. If you’re sorry you missed it, fear not. Ironman Michigan 70.3 is slated to return to Frankfort in 2022. 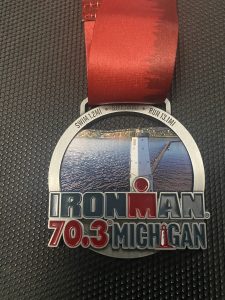