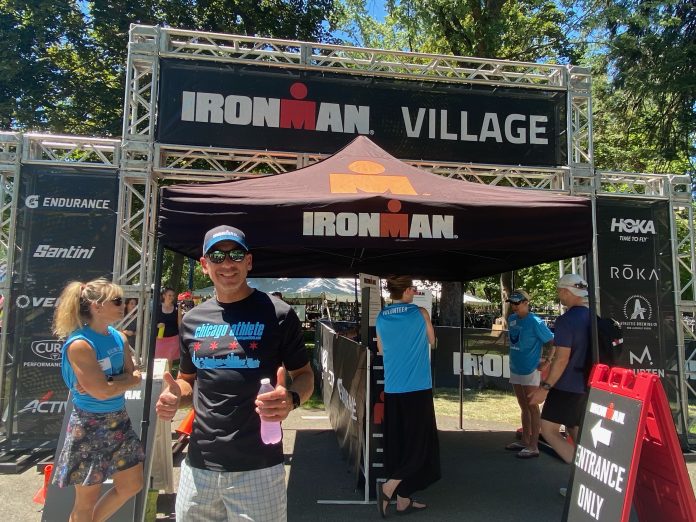 Oftentimes when racing, especially in iconic settings like Coeur d’Alene, Idaho, I’ll let my mind wander to my triathlete friends back home, wishing they could be there with me to share the beauty of the landscape and the charm of the town. Regarding Ironman Coeur d’Alene (IMCDA) on June 27, 2021, I wouldn’t wish this race on my worst enemy.

Let’s back up before it gets too far. I’ll explain the challenges of the day but allow me to clarify that this initial negative review does not reflect the town of Coeur d’Alene, Ironman, or the race organizers. This race was wrecked by Mother Nature, who decided to unleash a heat wave across the western half of our nation as many athletes like myself were preparing for their first full distance race in two years.

Coeur d’Alene is as beautiful as advertised, nestled up against a clear glacial lake, with a mountainous backdrop and pine trees far as the eye can see. It was like racing in a Bob Ross painting. The town itself fits the mold of many similar resort towns, with quaint restaurants, shops, and friendly people.

Besides an outlier year in 2015, where temperatures soared to 105°, the average temperature in Coeur d’Alene at this point of the Summer is 75°. When the initial hot forecast came out, I became obsessed with my weather app, checking the ten-day outlook multiple times per day. The temperature seemed to rise a degree every time I picked up my phone. I wasn’t alone, as the IMCDA Facebook group became littered with posts about the impending heat wave.

Luckily, athletes weren’t the only ones obsessed with weather, and this is where I give kudos to Ironman Regional Director Dave Christen and his team. Four days before the race, athletes were emailed with a list of adjustments made prior to race day. 33% more ice was ordered, with much of it being allocated to the run course. Cooling towels were ordered and available on the run course, with a stern warning to not double dip and a Seinfeld reference added in the briefing. The race start was bumped up to 5am to give all athletes a little more time on the course before the sun reached its peak. Lastly, misting stations were installed around the course and medical staff was increased to meet the demands of the day. With the forecasted high right at 100 °, all of this was needed, and it was comforting to know there was a plan.

And so, on an already warm Sunday morning, athletes began their day in the water with a 2.4 mile swim. I placed myself in the 1:20 group based on previous race times, putting myself in the middle of the pack of the approximately 2100 competitors. It was about an hour before I got in the water, with athletes jumping in two at a time a few seconds apart. The normally frigid water had warmed to about 70° and felt perfect in my full-sleeved wetsuit. The water was a clear blue, and every breath brought my gaze up to the mountains in the background. This was a two-loop swim with a brief beach exit between. I felt like the short break from being horizontal gave me a chance to reset my equilibrium a bit and check where I was on time. The swim was an absolute joy. 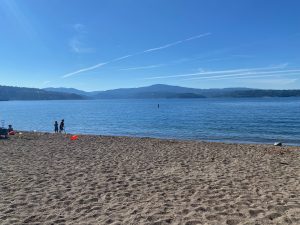 Unfortunately, I had to get out of the water and ride my bike. The 112 mile, two-loop bike course started by heading south, then veered back north onto HWY 95 where what were described as rolling hills were discovered to be long, arduous climbs followed by fast descents. For a Midwesterner like me, used to riding corn-lined flatlands, this would have been a challenge in mild weather. The heat was beginning to bear down by the start of the second loop, and shortly after I saw my first person that day being loaded onto a stretcher.

I was stopping at the special needs area just after the halfway point of the ride and there was another athlete, eyes wild with confusion, being help up on wobbly legs by paramedics and walked over to a stretcher. Dehydration and heat exhaustion had knocked out the first athlete of the day. He would be far from the last. Over the course of the second loop, I saw more and more athletes sitting under tents in the aid stations. I kept to my plan to stop at every station, refill my aero bottle with Gatorade Endurance and Base Salt, drink a bottle, and fill my kit with ice to knock down my core temperature. Every time I stopped the tents would be a little fuller, with many people receiving medical attention. Many did not make it back onto the course, and vans were filling up with bikes and athletes ready to hand in their timing chip. At one point on the course, at the top of one of the climbs, I saw an athlete reach the top, pause, and just fall over. The brutality of the day was taking its toll.

Upon entering transition, I found another athlete near my bike and we began chatting. I had no intention of hanging out long but was also not in a huge rush to begin my 100° marathon. A volunteer walked up and began asking us questions. It didn’t take long to figure out she was checking on us and grading our mental faculties. I learned after the race that there were athletes who spent over an hour or more in T2, waiting for the nausea and dizziness to pass before starting the run. More kudos to the race organizers for having people like her strategically placed to ensure safety. 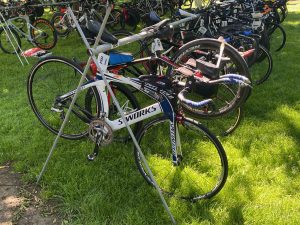 From my view as a middle-of-the-pack age grouper, the three-loop, 26.2 run was not actually run by many people. I was able to run well the first five miles, then moved to a walk/run combo before some dizziness hit me and the beginning of some cramping told me I better back it down. I had reached a point where I could guarantee a respectable finish. Any heroics from that point on were more likely to cause catastrophic failure.

The aid stations were well stocked on the marathon, featuring the usual – water, Gatorade, cola, gels, chips, pretzels, etc. More importantly, they were stocked with ice, most of it finding its way into people’s kits and hats. The people of Coeur d’Alene were amazing as well. Spectators lined the course with misters, hoses, and water guns, ready to spray everyone down. There were a couple of impromptu aid stations, my favorite handing out frozen popsicles just as the course turned up a hill with no shade. Those were a lifesaver.

Despite the support and well executed stations, the run course was just a horror movie sequel to the bike ride. At one point a gentleman just stopped in front of me and emptied his stomach right on the street. People were hunched over on the side massaging cramps, seeking shade, or just getting ready to call it a day. Those who were moving were shuffling along in zombie-like fashion. I also saw too many people on the grass beside the road being attended to by paramedics. This race wasn’t just difficult – the conditions of the day made it downright dangerous.

Still, the march continued until I made a final left turn and the finish line was in sight. The finish line was deceptively farther away than it looked, and I willed my legs to not cramp in the final quarter mile and just get me to the end. They did. Mike Reilly was energetic as ever and the owner of every name called had to know they just completed something truly special.

Most Ironman races will have a “did not finish” (DNF) rate in the single digits. Very hard courses may creep up to the 14-18% range. IMCDA 2021 finished with a 27% DNF rate, a very extreme number. An estimated 600 people started but did not finish the course within the allotted time frame.

IMCDA truly is an iconic course, and I’m thrilled to have checked it off my list. The town, Ironman crew, and local EMS did everything right and delivered the best race experience they could. Sometimes Mother Nature is just a b…..