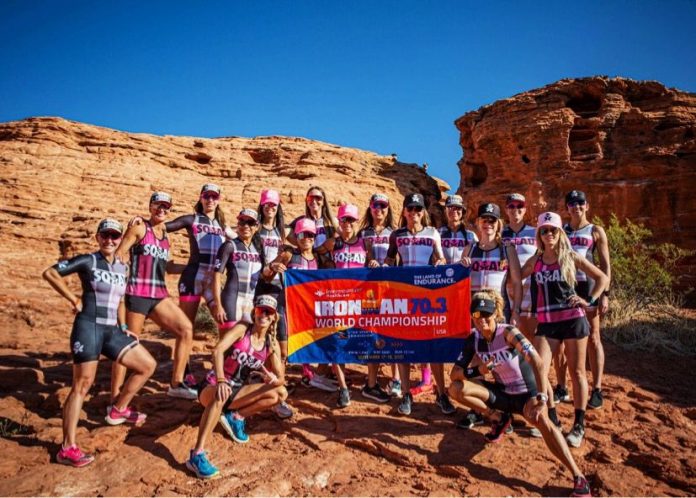 Most triathletes are familiar with the famous Ironman World Championship in KONA where athletes have to qualify to get a slot to have the privilege of racing in Hawaii. However, there is also the Ironman 70.3 world championship that takes place every September in different hosting cities around the world. This year the event took place on September 18 in beautiful St. George, Utah. 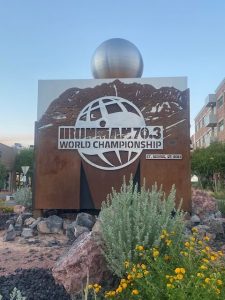 St. George is located in the greater Zion area which features modern hotels, resorts vacation and air BnB options. It is easily accessible via the St George airport or by flying into Las Vegas and driving 2 hrs. There is plenty to do in and around the surrounding area.

The 2021 race was originally scheduled to be in New Zealand, but unfortunately it was cancel due to COVID. Just like with Kona, Athletes have to qualify to get a slot to race in this event. Every 70.3 race has about 40 slots that get evenly distributed among all Age groups. Due to COVID and the traveling restrictions to enter the USA, many athletes were not able to attend. As a result, there were extra slots available. St. George had over 3000 Americans athletes and several hundred athletes mostly from other countries in North America. I met a few athletes from Brazil who were able to come having to quarantine in mExico or the Caribbean islands prior to entering the USA.

Without a doubt this event brings the fastest and bravest of all athletes. The course is usually much more challenging than regular 70.3’s. The course in St. George is known as one of the toughest for its hilly bike and run courses.

Originally, the men and women were racing on separate days but due to a smaller field than anticipated, the race was combined. There was definitely concerns among female athletes when the announcement was made 4 weeks before race day. The waves had pros going at 7am, followed by all the men.  The Women race started at 8:57am. The main concern was the heat, the week before race day was in the 100’s.  Nobody expected the cold front and weather changes that we experienced, after all  St. George had not had any rain for 200 days prior to Saturday.

The logistics of this race are a bit cumbersome. First of all it is a point to point race meaning there are two separate transitions. T1 was at sand hollow about 30 min from st. George while T2 is in downtown. Bikes, bike bag and run transitions bags had to be dropped off by 5pm the day before the race. I made all my traveling arrangements with Premium Plus Spots which included shuttles to bike drop off and everything else I needed for race day. This made logistics much easier for our group, I highly recommend Deepak and PSS. The night before the race the weather showed rain from 11-2pm I did not think much of it, it seemed so minimal and insignificant at the time. Who would have thought it would turn out to be a full blown storm.

Ironman did a terrific job with safety precautions, face coverings were required in all indoor venues and athletes were able to schedule their check in, bike drop off, and transition bags drop off in advance.

The swim is in beautiful Sand Hollow reservoir surrounded by mountains and lava rocks. It’s a stunning place, highly recommended. The water temps were in the high 70’s. This became a non wetsuit legal race, meaning that wetsuits were not allowed only skin suits. The water was clear and smooth on race morning until the storms came through. I later found out that the 45-49 women’s wave were in the water when the storm hit and they were pulled out of the water in kayaks and boats.

The bike course is a challenging one loop 56 mile course through hurricane city  (how appropriate) with rolling hills and the infamous 3 mile climb to snow canyon, followed by a wicked fast down hill into St. George. The total elevation was 3625 ft

At around 1030 am the sky turned black and rain, sand and hail started to come down hard. The crossed winds were so strong (30+mph). Most athletes were struggling to keep their bike up right. The rain got worst and the sand and hail continue for what seemed to be forever. At this point I saw three women getting off the bikes saying the wind was too strong. I saw tumble weeds coming through, you can’t make that up. I kept thinking where the heck did this come from. The rain stopped after about 45 min. The roads were slippery and the climb to the top of snow canyon was like a dead March. Athletes looked tired. Most athletes look forward to the descent from snow canyon but the rain made difficult to go fast. At least for me, I was extra cautious and made the conscious decision to play it smart and safe. I knew I wanted to finish this race in one piece.

Quick tip, always have an extra pair of socks in your T2 bag. Unfortunately for us, the torrential rain started again as soon as I started running. I felt the anger and frustration build up but all you can do is to keep moving forward.

The run course is one of the toughest in the circuit with 1174 ft of elevation, for my running athletes this is almost twice as much as the Boston’s marathon. This is a two loop course. Athletes run up to the ridge for about 4 miles and then run down hill for almost 2 miles. It’s a brutal unforgiving course.

Needless to say, the later start for the women at 70.3 world championships delivered a very different race experience for us. Especially for the later waves, the transition was a disaster with bike racks flying around and bikes on the ground. I heard several people had mechanical problems due to bikes falling off the racks.

I guess that is the fun part about triathlons, you never know what race day will bring. it challenges you both physically and mentally so  there is much more than swim, bike and run training. We have to have the mental toughness to adapt to weather changes, mechanical issues, accidents, etc.

I am aware it is a privilege to be able to do this, I don’t take it for granted. I am grateful and proud of all the athletes who participated in this race. Congratulations, You have all earned some major bragging rights, but to all the women and especially my Betty Squad  team mates ❤️☠️🦋 You  are all BADASS BEAUTIFUL. Keep it up ladies.