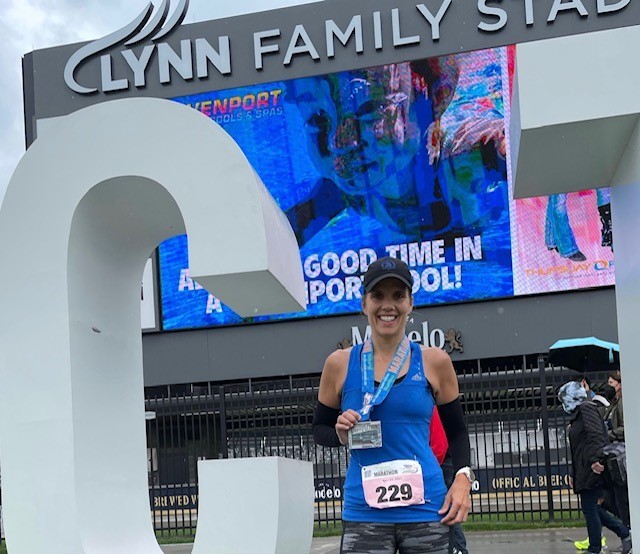 In a time when races are scarce and travel is more challenging, it can be tough for area runners to find races that fit their schedules. For those willing to travel just a bit, the Kentucky Derby Festival Marathon in Louisville is a great option. The Marathon has been a staple of Kentucky Derby week for 20 years, with the miniMarathon (half marathon) having been around for far longer. The miniMarathon was run over four days this year, while the Marathon took place on Saturday morning with staggered, pre-scheduled starts.

Packet pickup was held throughout the week preceding the race. However, for out-of-town runners, there was an option to pick up packets on race morning or, even better yet, have available at check-in if runners stayed in one of the race-sponsored hotels. This made the night before the race relaxing, especially after the roughly 5-hour drive from Chicagoland. 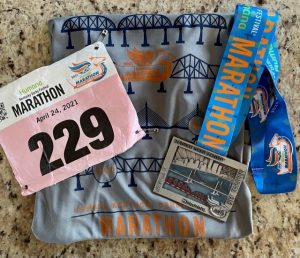 Upon arriving at the Start line at Lynn Family Stadium, runners were able to begin their race when they were ready. This kept runners moving and, because everyone had been assigned a wave, there were no crowds. The course had been altered to accommodate social distancing with the first several miles through Louisville before crossing the Ohio River to run much of the race along the Indiana waterfront. The course was run mostly along paved paths with views of the River and, at times, on roads with only minor traffic. The bridge over the Ohio River presented the largest hill in the race and, while it didn’t seem so bad around mile 4, the return trip over the bridge around mile 20 presented quite a challenge.

At the race’s finish, runners returned to Lynn Family Stadium and were greeted by cheering volunteers and just a few distanced tents that included medal engraving and race merchandise. Runners were encouraged to take a breather but not hang around too long to prevent crowds from forming. With the chilly air and light rain, most didn’t seem to mind making a quick exit.

Some runners were disappointed that the course was changed and didn’t run through Churchill Downs, but the organizers did everything they could to keep everyone safe. It’s hard to say what next year will bring, but if runners want a well-organized race with great river views and awesome volunteers, a drive to Louisville, Kentucky is well worth it!