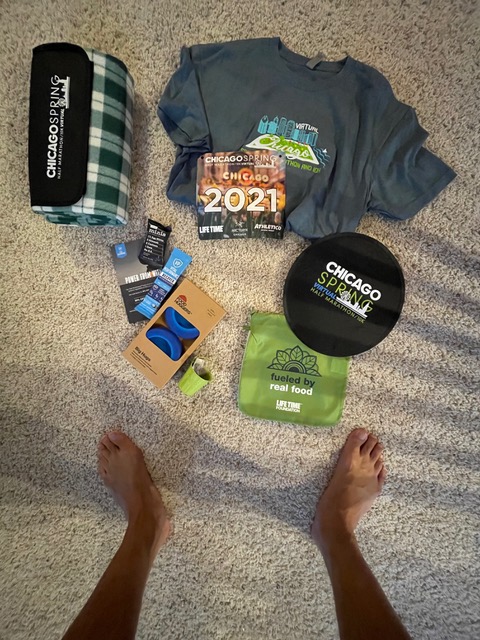 I ran the Chicago Spring Half Marathon for the fourth time this morning (Saturday, 5/22) but this was the first time that I have run the race virtually.

The race started at 7:10am, right outside my apartment building in Fulton Market District. I ran two miles East to the Lakeshore path and proceeded North to Belmont Harbor, which was my halfway point, where I simply turned around and headed home.

The race itself, like other virtual races, was fun and fulfilling but also quiet and anticlimactic. No crowds. No official course. Just me, my Spotify playlist, and the open pavement. There were tons of runners on Lakeshore path, and I even saw a handful of other fellow half-marathoners, wearing the same bib that I was wearing.

Despite starting with cloudy, 60-degree weather, I would say 75% of the race was sunny, hot, and humid. I was running at negative splits, but I had to stop a few times during the 2nd half of the race to catch my breath and seek shade. Regardless, I am immensely proud of what I accomplished and props to anyone else running their race solo this weekend. It’s never easy racing, without crowds and other racers.

The race ended just before 9:00am on the Chicago Riverwalk. The last 0.5 miles felt like forever and upon finishing, I immediately bought myself an ice coffee as my own token of appreciation.

Props to Life Time, the sponsors (+the awesome runner swag), and the other runners for making this virtual race something tangible., Running today gets me so excited for in-person races this Fall.