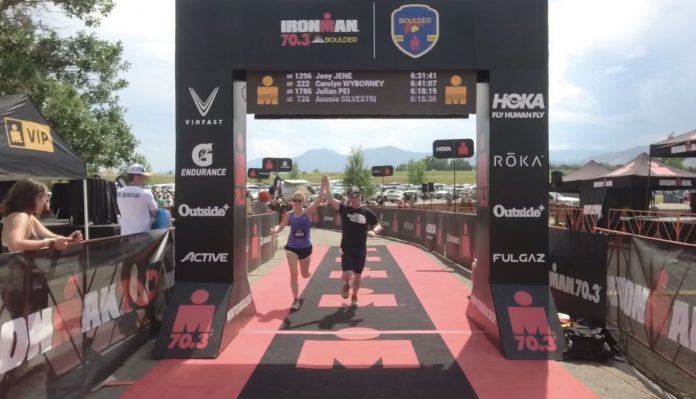 In Boulder, Colorado, a mecca for endurance athletes nestled in the foothills of the Rocky Mountains, Ironman hosted its 20th edition of the Boulder 70.3 triathlon on August 6, 2022. I had been looking forward to this event since signing up last year, anticipating a hot, challenging environment at 5400 feet above sea level. The race did not disappoint.

Being a sea-level creature my entire life, I researched various methods of maximizing performance when racing at higher altitudes. Opinions varied, but most advised to take one of two approaches: either get there a couple of weeks early to let the body truly acclimate or get there as close to race day as possible and get it done before the body knows what hit it!

With family and work commitments, I chose the latter. I flew into Colorado on Friday morning, less than 24 hours before the race began. The jury is still out on this “get there and hammer it” approach.

I headed straight for Ironman Village upon arrival, enjoying the views from my rental car as I trekked the 45 minutes up and around Denver to the Boulder Reservoir. There still exist a handful of check-in procedures from the Covid era, including prescheduled athlete and bike check-in time windows. I was also happy to see some departures from Covid racing, including race names reappearing on swim caps, backpacks, and other swag. Boulder 70.3 even featured a flag in this year’s pack, which is something I haven’t seen in many races! 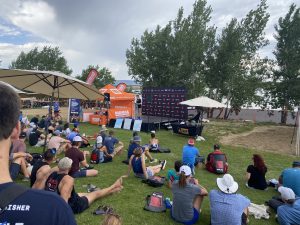 With check-in complete and my bike reassembled from the flight (no extra parts this time), I set off to meet some friends for dinner and settle in for the night. The town of Boulder itself was buzzing, with streets blocked off, music streaming from the doors of bars and restaurants, and crowds of people enjoying the warm evening on patios and sidewalks. On any other night without a 4am alarm looming, it’d be easy to get caught up in the vibe and make it a full night exploring the downtown area.

That 4am alarm came quickly though, and I would soon be grateful I got up and moving when I did. There are only a couple of roads into the Boulder Reservoir, and what had been a 15-minute drive out to my hotel the day before turned into a 45-minute drive back in. Still dark as I approached the entrance, the line of headlights behind me and on the other road leading in went on as far as I could see.

Luckily, I left early enough to arrive in transition an hour before it closed – ample time to prepare. But hundreds of people had not anticipated the wait times to enter the Reservoir and the line of cars continued to grow as the transition closing time of 7am neared. I began to pull on my wetsuit when an announcement was made that the race would be delayed 30 minutes to allow everyone to get in, parked, and prepared to race. Fair, but this also meant athletes would be out on the run 30 minutes later on a day expected to climb just above 90 degrees.

The swim course was barely wetsuit legal and featured a rectangular, counterclockwise swim with the buoys on the right. Effort was made to reduce congestion in the swim, with pauses between the self-seeded time groups to space everyone out. I started my swim slowly, heeding warnings about increased breathlessness when swimming at altitude. I quickly settled in though and found clear swim lanes to the end. 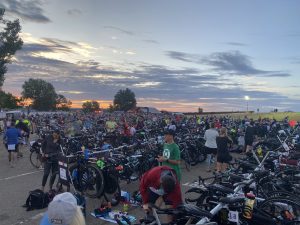 The bike course is known to be fast, and much of it lived up to the hype. There are not many daunting hills, but very little of the course is flat. I remembered the advice from the athlete briefing – if the mountains are in front of you, you’re climbing. If they’re behind you, you’re descending. The elevation changes were subtle, but the changes in speed were very apparent. The bike course seemed very crowded, especially at the beginning, and a couple of no-passing zones slowed things down a bit. Personally, I felt I cycled well for the first 40 miles of the course, but as the heat and altitude began to take its toll my power began to wane. I made sure to take in some of beautiful views of the Flatiron mountains as I slowed and eased my way back into transition.

The full brunt of the conditions hit hard as I took the first few steps out of transition onto the run. The course featured a mostly gravel trail, rocky in some parts, with no shade for athletes to hide from the now blaring midday sun. The terrain was similar to the bike where it was not hilly, but there was always a sense that I was either climbing or descending slightly.

With visions of achieving any type of personal best evaporating with the rest of me, I settled into the easiest jog I could muster. Aid stations were well stocked, and I made sure to walk through each one to dump ice into my kit and hat and drink what I could. My stomach was uneasy at times, which I immediately attributed to the heat and altitude. Then news came that the Boulder Reservoir swimming area was closed just a couple days after the race due to high bacteria levels. Could the water have played a role? Maybe. Without diving into gory details, I witnessed many other athletes step off the run course to evict the residents of their abdominal cavities. It was just that kind of race. 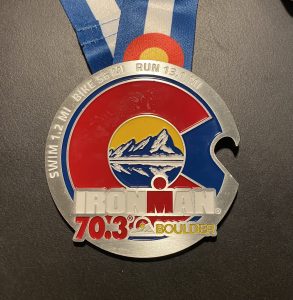 Boulder proved to be a challenge, but the city and the iconic course lived up to every bit of hype and showed why this is a bucket-list race for many athletes. There are many race locations I’ve checked off with a “been there, done that” attitude, but I’d go back to Boulder in a heartbeat.