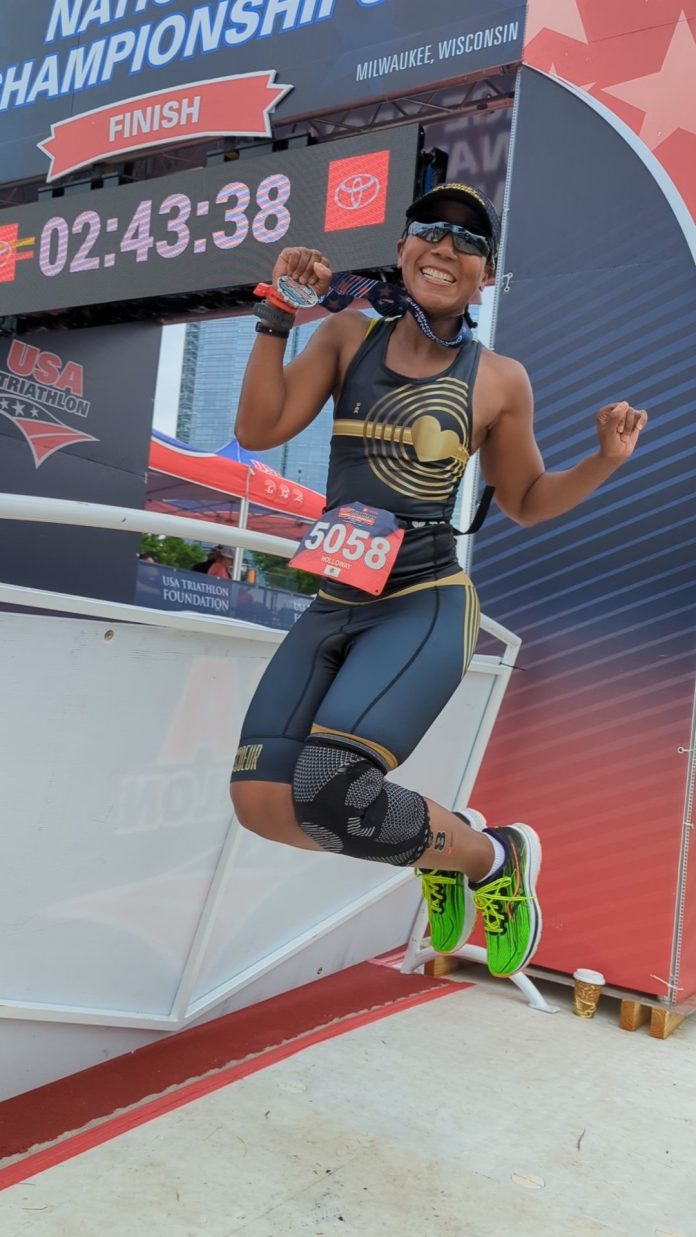 Prior to 2021, the USAT Age Group National Championships had in recent years been held in Cleveland, Ohio. Last year’s move to Milwaukee, Wisconsin, though I never raced it in Cleveland, in my opinion, was a great move. Ok, I’m biased since it’s less than 2 hours from Chicago and easy to get there. However, I loved it in Milwaukee last year, so I was looking forward to being there again.
Never having been to Milwaukee before 2021, I must say I really enjoy the city.  As a Chicagoan, it has the feel of a smaller little sister to “The Windy City”. The downtown lakefront and pier location is a perfect choice, especially since the bay is enclosed and protected from the remaining element of Lake Michigan.
The weekend consists of a few race events including starting off with Friday’s Open Water Competition.  This year brought a drop in water temperature to 58 degrees, which required mandatory wetsuits for all of its participants.  Even with the heat and humidity of the day, I’m sure jumping in the lake was not quite “refreshing”.
The second race event on Friday was a fun Splash and Dash for children ages 7 to 15.  This time it was changed to simply a dash, however, the young people were just as competitive and seemingly enjoyed running the 2K course.
Packet pickup and expo in outdoor tents overlooking the lake and downtown views was smooth and full of vendors for equipment, nutrition, and yes…massages.
Having the opportunity to listen to two-time Olympian and triathlete Laura Miller and her husband Greg was a real treat.  Laura and Greg talked about their experiences, challenges and successes of getting on an Olympic team.  They were both motivating in sharing their triathlon journeys.
The Olympic-distance race was on Saturday.  With a 4:55am transition open time and a 7:00am race start time, it provided an ample 2-hr timeframe for all participants to get set up and ready.  The energy was high with music, announcers, race participants enjoying a sunny and warm morning, and plenty of families, supporters, and volunteers to usher in a great race.
The cool part about the swim layout is that the lakefront allows spectators to watch as triathletes swim down the bay, under a bridge, continuing along the bay to a course u-turn and then back towards the swim finish. Viewers can stand on the bridge and look down on triathletes as they pass under them where they can shout, cheer, and take photos from above them.  Spectators can also sit along the grassy area to watch as they finish.  The water temp was 62 degrees on Saturday and definitely most wore wetsuits, though it was not required. It was definitely a hot and humid day so for the remaining bike and run portion, staying hydrated was key. 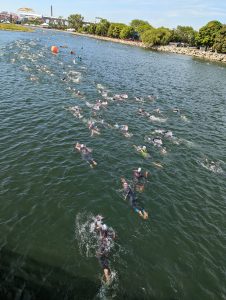 Though you can’t see the whole bike and run route as a spectator, you get to see participants come in off the bike strong and exit transition to the run.  With the last 50+ yards left of the run, spectators lining the path and hearing the cheers and announcers is exciting.  The bridge from Discovery World to the opposite side of the street also allows viewers to look from overhead onto bikers heading out and back, as well as runners coming into the finish.
The forecast for Sunday was thunderstorms all day, so as I woke to rain it was not a surprise.  The race announcers had previously informed participants of the Sunday Sprint distance that they would provide updates in the morning via email and the USAT app.  With transition opening at 4:55am again, by 5:00am they provided the update that the Sprint race would be changed to a Supersprint distance with a trial time start. This was a smart move and proved that they were thinking of the safety of the athletes.  The more chances of rain throughout the day and the longer the race, the more likelihood for complications, hazards, needing to cancel or cut off the race if it got bad.  I believe they wanted to ensure as much as possible that the race would go on but make it short and quick.
As a Sprint, now Supersprint participant, I was actually quite pleased with the decision because 1) the trial time start made the waves start time move up (I was in the last age group wave, which I wasn’t pleased about) and 2) I’m not a fan of biking in the rain and think it can make for slick conditions and increased crashes on the bike. However, by the time the race was getting started, the rain had eased up.
For the swim start, each wave lined up and by the time they got to the start area of the pier, each wave triathlete was in a single file line that got grouped into a four-some and that group of four jumped into the lake and headed out on the swim.
Jumping into the water, which by Sunday had gotten up to 65 degrees, it was still a bit on the cool side (especially without a wetsuit), but with race adrenaline and focus, I quickly got into my rhythm. Being in one of the final waves, I wasn’t as worried about other waves coming up on me, though by the time we passed under the bridge and got to the first turn buoy, there seemed to be a crunch of swimmers packed together. I got a little panicky being crowded around like that, but managed to flip over, calm myself and breath and make my way towards the swim exit to finish the 420 yard swim.
My transition was pretty uneventful and the spacing was good, so it was on to the bike.  With the second half of what would have been the sprint distance of 20K, that has the long uphill portions on the expressway, being cut, the bike portion of now 6.5 mile was easier to take fast and furious.
Coming in off the bike is typically where I get most excited as a stronger runner, however, having knee issues this last year, I was happy it was a pretty level run course.   The tricky part of this second transition, which is typically faster for me, was that I took more time and was challenged in getting my knee brace on due to sweating. 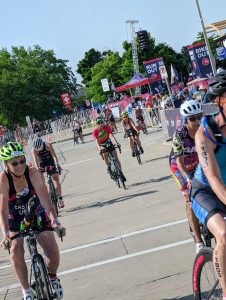 I didn’t attempt like I know most athletes to take the 1.25 mile run all out.  As a first race with an injury, a brace and still getting back into my run flow after a few month hiatus, sometimes it’s best to see how things go and enjoy the race. I did manage to kick into a faster gear the final 100 meters or so to finish. 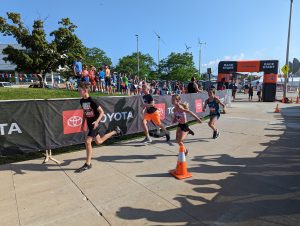 Overall, though the Sprint race being changed was not ideal, the decision was a good one, even if Mother Nature decided to not rain most of the race and then had the nerve to show a little sunshine post-race. As you would expect, for a championship weekend of events, it was very well organized and executed.  With 6000+ participants, I would continue to recommend this race and that it stays in Milwaukee.