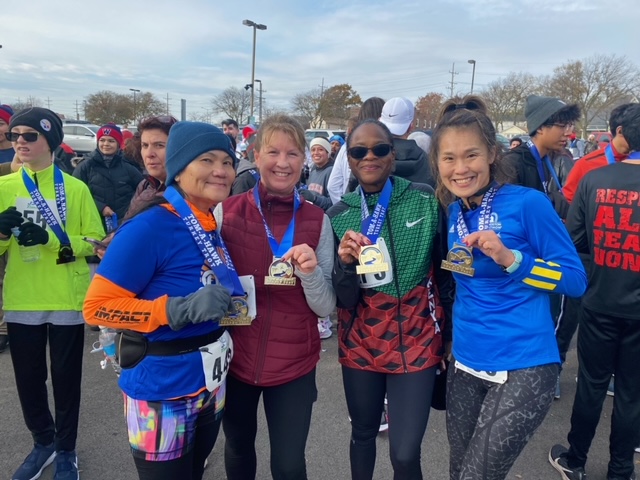 An inaugural 5K, Tom-A-HawkTurkey Trot, took place on flat and fast course along the Fox River at 9AM in Aurora, IL on Saturday, November 20, 2021.  642 people participated in person race and approximately 100 people joined virtually.

E-mail was sent with detailed information containing start/finish line, parking information, post celebration and award celebration.  Participants were given two options for packet pickups.  We had a choice to pick up our packets on Friday at West Aurora High School between 4-7PM.  This was conveniently organized as a drive though pick up.  The second option was to pick it up on the day of the event started two hours prior to the event.

It was a rather cold and windy morning.  So I truly appreciated that plenty of parking spaces were available at right by start/finish line.  I was able to keep myself warm in my car until 10 min prior to the event and walked to the start line. A plenty of Porta Potties were available at start/finish line area.
Race Director, Shane Gillespie, was on the course with the bike to make sure runners’ safety.  Courses were clearly marked and cheerful volunteers guidance were offered.  Two aid stations were available proving a cup of water.
This race was truly for all levels of runners/walkers.  Many current and former cross country runners from East and West Aurora High schools and surrounding areas were leading the competitive race while many runners and walkers followed the suit.  I felt Aurora and surrounding area communities came together to support East and West High schools.
Water, Banana and hot chocolate were given to all runners at finish line.  Food Truck was available at additional cost.  Runners were invited to Two Brother’s Round house for Post Race celebration and Award Ceremony. Each participants received one complimentary beer ticket (also was able to use for non-alcohol beverage).
Award Ceremony promptly started at 11AM.  The race winner, Dylan Zangri from Oswego finished at 16:41 and won the trophy and a fresh Turkey.  All male and female top three as well as age group top three winners were given a medal.
You can register for Tom-A-Hawk Turkey Trot 2022 at https://runsignup.com/Race/IL/Aurora/TomAHawk5k?remMeAttempt= once their registration opens.