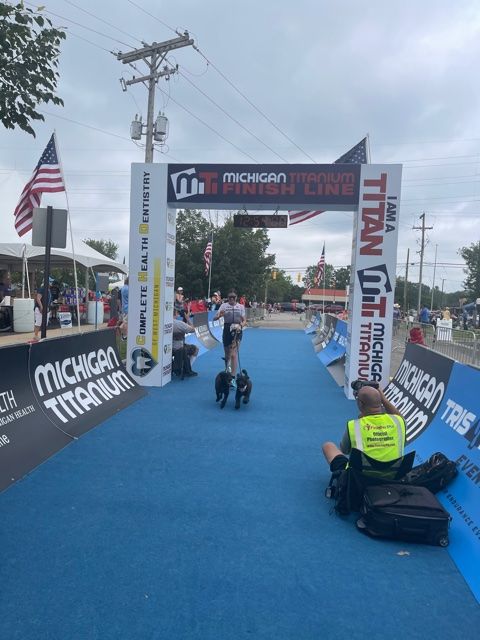 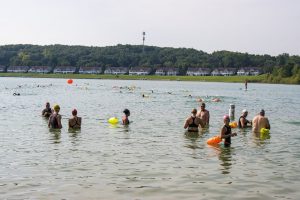 All courses swim/bike/run in similar areas, which makes it great for anyone spectating multiple distance races! The swim is in a pretty clear 50-acre man made lake and has been wetsuit legal in the past but was not this year, which makes sense given how hot it has been. All race courses head out the same way, and the Olympic distance is marked with orange turn buoys whereas the Half/Full distance are marked with yellow turn buoys. Both courses essentially make triangles and contain enough site buoys throughout the distance. The full athletes just do the half course twice. Athletes then run onto the beach before heading onto a bit of pavement to get to their bike racks. 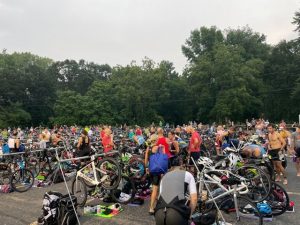 Onto the bikes, athletes make two quick turns before heading onto a main road for a longer stretch. The Olympic athletes had miles marked every 5 miles, and the Half and Full were marked every 10 miles. Local police were at every intersection to help with traffic, and turns where there wasn’t traffic were marked with clear arrows. There were four aid stations on the course (so athletes hit most of them twice since this was an out-and-back with a big circle/square, so kind of like a lollipop) with water, Gatorade, bananas, gels, and ice. The bike course was mainly rolling hills, which made for a slower bike course and for sure the slowest of the ones I’ve done in the midwest (Grand Rapids Tri in June, Steelhead, Muncie and Door County to name a few). The roads were typical midwest roads with some chipseal, but no real bad bumps or areas to watch out for. Spectators were randomly in the most-needed spots which was super helpful as the false flats can definitely be frustrating at times!
After racking the bike (which were personalized for each athlete btw!), athletes were treated to about a half-mile incline uphill to start off the run. But! Once you conquered that “hill,” athletes were on a fairly shaded road for a 3.5-mile out-and-back (3.1 for Olympic distance athletes). It was still a little rolling, but aid stations were plentiful, about every 1-1.5miles, and included water, Gatorade, sponges/towels, ice, Pepsi, bananas, pickle juice, cookies, pretzels, gels, oranges, and broth. Half distance athletes ran the course twice, and full distance athletes ran the course four times. Olympic athletes just had one out-and-back, which I was a bit jealous of as I headed out for my second loop! BUT, the turnaround for the second loop was FULL of spectators, so it didn’t feel as bad heading back out to do the run again.
The finish: THE BEST PART!! Bring your friends, family, and dogs! This was the first race where I got to cross the finish with my puppies and it was AMAZING! The crowd went nuts and my two mini goldendoodles just LOVED the attention. Many parents crossed the line with their kids as well. The atmosphere at the finish is full of excitement, and athletes are also treated to cooling towels upon arrival. Post-race food included Papa Murphy’s pizza (hot and fresh!), bananas, oranges, chips, Gluten Free bars, all sorts of pops, and waters. Awards were not handed out in person this year, but would be mailed if athletes were unable to wait for official results to be posted.
The volunteers, the variety of options of race distance, and the location make this race a must-do to mark for your calendar in August 2022!