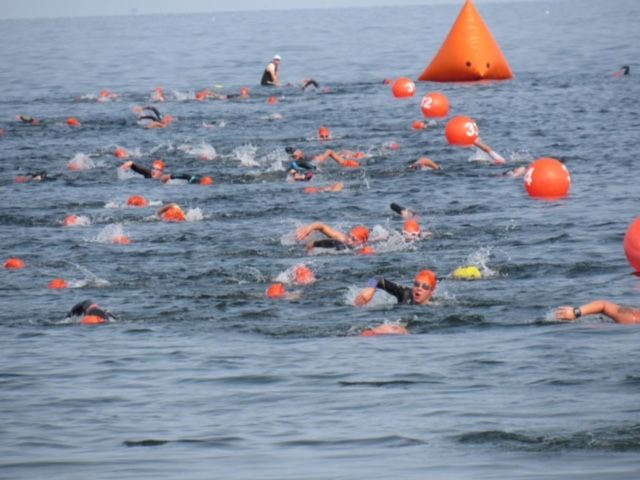 Mark your calendars for October 1, 2021 (when registration opens) and book your Door County lodging NOW as the Door County Triathlon weekend is not one to miss! Located approximately 4 hours from Chicago, this race is one that belongs on every midwestern triathlete’s calendar.

The Door County Triathlon offers a Sprint distance as well as a Kids Tri on Saturday and then hosts a Half Iron distance on Sunday AND both the Spring and Half Iron offer Relay options as well. The whole weekend is incredibly well-organized and the volunteers are fantastic. The 2021 swag included a mesh bag (for your pool swimming gear!), a Craft t-shirt, and cool medals that will be mailed out to athletes (darn shipping issues!). Overall winners receive glass lighthouse trophies which are pretty unique! 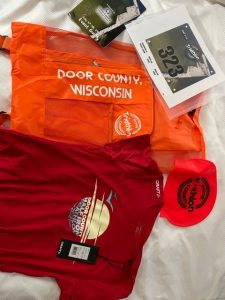 The half iron distance begins with a 1.2-mile swim that is marked every 50 meters with numbered buoys, so if you’re good at math you probably know that you’ll count 35 buoys. Despite a seemingly large number of buoys, the swim went by pretty quickly! Kayaks and boats are out there to help athletes as the buoys are to stay to the left of the athlete, and the volunteers did a great job of keeping athletes on course.

After the swim, athletes are greeted with (optional) wetsuit strippers before rushing into transition to grab their bikes. There are plenty of portapotties in transition for pre-race and in transition if need be.

The bike course was changed a bit this year to a two-loop course. The first 13-miles (and later miles 29-42) are essentially along the water on perfectly paved roads. Athletes then take a left turn onto a bumpy road before being graced again with nice roads. There were a few rollers during the next section. Every single mile was marked, which is unheard of in most 70.3 distance races! There were 2 aid stations that athletes hit on each loop, offering both water and Gatorade as well as medical attention.

The run course was overall pretty well shaded, which is great for a July race. We went through many resort areas on the mainly flat course. There were aid stations about every 1.5 miles, offering water, Gatorade, ice and some gels. There was even a Freeze Pop station at about mile 11 which was fun to see! There were two significant hills, one at about mile 5.75 and one just after mile 9, and they had some great signage! Athletes ended the run with a huge downhill into the finish chute where the post-race party awaited them. Pulled pork, corn on the cob, watermelon, oranges, bananas, pop and beer were plentiful at the finish line while athletes celebrated their accomplishments. The icing on the cake (besides the cool awards that will be mailed to us!) was that athletes received race pictures for FREE! 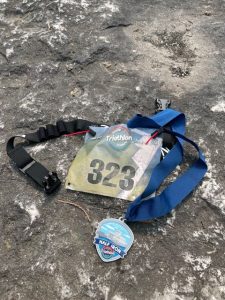 The Door County Triathlon does sell out (and so do accommodations!), so make sure to follow their Facebook page/website for updates as this is not a race to miss!