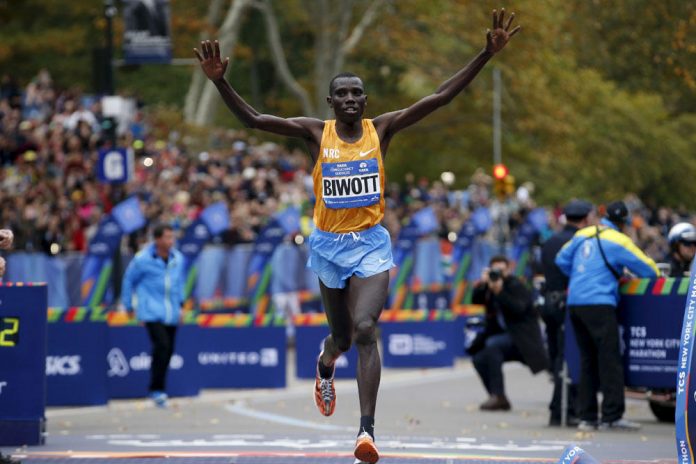 Today, the Bank of America Chicago Marathon announced changes to the elite field for the Oct. 8, 2017 race.

Stanley Biwott (KEN) will make his Bank of America Chicago Marathon debut as the seventh-fastest man in history over the marathon distance (2:03:51) and the 11th-fastest in history over the half marathon on a record-eligible course (58:56). Biwott made his mark in the Abbott World Marathon Majors with a victory at the 2015 TCS New York City Marathon, and with a standout performance at the 2016 London Marathon, finishing second to Eliud Kipchoge (KEN) in a career best, 2:03:51 (Biwott and Kipchoge share the 30K world record, 1:27:13, set during the London Marathon). Biwott has finished in the top five of 10 marathons.

Feyisa Lilesa (ETH) gained international attention at the 2016 Rio Olympics when he finished the marathon with a silver medal. However, he initially made a name for himself in 2010 when, just two months after his 20th birthday, he became the youngest athlete to break 2:06 in the marathon with a 2:05:23 performance in Rotterdam. He has run well in Chicago, finishing third in 2010 and coming back in 2012 to chase Tsegaye Kebede (ETH) to the line for second place and a new personal best, 2:04:52. His 2017 campaign started with a second-place finish at the Houston half marathon and wins at the New York City Half Marathon and the Bogota Half Marathon.

Bernard Kipyego (KEN) returns to Chicago after finishing third in 2011 and sixth in 2012. He started his international career 14 years ago as a junior competitor, and he has represented Kenya on the track (5,000m and 10,000m), in cross-country and on the roads. He won a silver medal at the 2009 IAAF World Half Marathon Championships where he clocked a swift 59:59, and he has consistently run under 60 minutes in the half marathon six times and under 2:07 in the marathon five times. He set his current personal best, 2:06:19, in Amsterdam in 2015. He is a two-time winner of the Amsterdam Marathon (2014, 2015).

Ezekiel Chebii (KEN) opened his marathon career in 2014 by winning the Madrid Marathon while setting a course and all-comers record (2:09:15). He returned to Madrid in 2015 to pick up another win, and he hit his stride in the marathon in 2016 when he ran 2:06:07 in Amsterdam to finish fifth. He became the 16th-fastest man in history over the half marathon distance in 2012 (59:10). Chebii started his 2017 season at the Otsu Lake Biwa Marathon with a win.

Yuki Takamiya (JPN) and Jordan Chipangama (ZAM) have withdrawn from the race.

Brigid Kosgei (KEN) is relatively new to the Abbott World Marathon Majors, and she has only been competing in marathons for the past two years. Within that timeframe, she has won three marathons, and she set her personal best, 2:24:45, at the 2016 Lisbon Marathon for a runner-up finish. She started 2017 with a new personal best in the half marathon, 1:07:35, an eighth-place finish in Boston, and a win at the Bogota Half Marathon.

Maegan Krifchin (USA) is an exciting runner who went into her marathon debut in 2015 completely under the radar and ran away with a 2:33:30 PR, the ninth-fastest time posted by an American woman that year. She followed her debut with another big performance at the 2016 U.S. Olympic Marathon Trials. In spite of high heat and humidity, Krifchin finished seventh, running a disciplined race with nearly identical half splits to come home in 2:33:34 (the 13th-fastest American time in 2016). Heading into the trials, she won the 2015 Philadelphia Rock ‘n’ Roll Half Marathon in a personal best, 1:09:51.