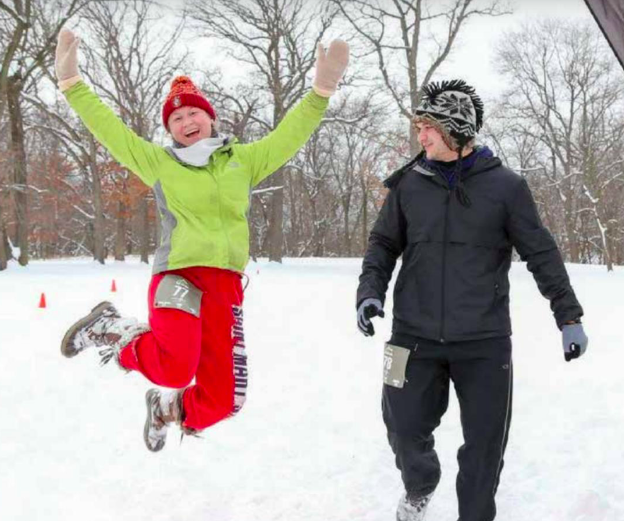 We’ve all been there before: it only takes one glance outside the window—to see snow falling yet again or notice temperatures approaching zero degrees on the thermometer—to be tempted into staying inside and training on a treadmill or indoor bike instead.

Even if you love the snow, you have to admit the long winters in Chicago can be brutal, from the bone-chilling winds, to the near daily snowstorms. But what if you haven’t thought about the positives of training outside during the winter? What if there were more ways for you to become involved in (and interested in) outdoor training sessions than you realized?

To help motivate you this winter, Chicago Athlete Magazine spoke to six local trainers, running coaches and marathoners who advise you to consider the following methods as you prepare to train outside.

There are a variety of training groups, whether free (like those offered by lululemon and Fleet Feet) or paid (such as those provided by the Chicago Area Runners Association [CARA] and Chicago Endurance Sports [CES]), available in Chicagoland. Groups are especially important during the winter, as they offer much needed support and accountability.

“A runner is more likely to go out for an outdoor run if he or she knows someone else is counting on them to show up,” says Brendan Cournane, owner and head coach at Coach Brendan Running.

“By having others to train with, you will go farther and faster than you may have on your own,” adds Lauren Kersjes, a 2:44 marathoner and Olympic trial qualifier.

Lori McGee Koch, the head running coach at Chicago Endurance Sports, agrees, stressing that a large support system is crucial during colder months with lower visibility. She believes runners should seek the following when they’re looking for training groups:

As runners seek new group training sessions, they should consider CARA’s half marathon and full marathon programs. The first group run for half marathon winter training was held on Nov. 7, while the first group run for full marathon winter training will occur on Dec. 29. According to Tim Bradley, director of training for CARA, pace groups can range from eight to 12 minutes, as run/walk groups are also available.

Similarly, CES offers a winter training program, called Winter Warriors. Throughout a 12-week period, runners can train for upcoming 10ks or half marathons.

If athletes prefer to train with just one person, rather than a group of people, they should seek a training partner instead. Just like a group, this partner will provide support and accountability as well.

“Much like training with a group, setting a time and place with someone holds me accountable,” Kersjes states. “When it’s dark and cold outside, nothing motivates me more than meeting up with someone.”

To find a new partner, runners should consider reaching out to people they’ve met during previous runs, athletes they’ve spoken to during past running seasons or friends and acquaintances they’ve met at their gyms, as they may be interested in an alternative to monotonous indoor training.

As athletes seek new partners, they should also think about training alongside people that either have the same ability level as them or are slightly better, so that they can maintain the same pace and even be motivated to improve their speed and endurance. Of equal importance, runners should also find partners that are training for the same distance as they are.

The social aspect of partnering with friends or acquaintances should not be overlooked either. Like training groups, a partner may offer social activities in which the two runners can meet and discuss their fitness ambitions, according to McGee Koch.

“Furthermore, running with a friend helps with the ‘talk test’—when running, athletes should be able to talk in complete sentences,” Cournane adds. “And, when they’ve finished the run, they should feel as though they could run another mile or two at the same pace.”

Implement Routines and Grow as an Athlete

Sometimes athlete simply need to train in areas they’re the most accustomed to, as familiarity not only increases their confidence, but also provides them the motivation they need to run during the winter.

Cournane advises runners to run at about the same time of day they’d run during the summer (unless it is later in the evening, of course). As they implement their usual summertime routines, they can start with shorter runs—typically 15 to 30 minutes—and then extend them whenever they’re ready.

At the same time, Cournane also believes runners will grow the most, particularly as athletes, if they’re able to leave their comfort zones, especially during the winter.

“Whether you’re running outside once a week in the winter or you’re exclusively training outdoors all winter long, get to know a different part of you as an athlete, a runner and a person,” he says. “Use all your senses to determine what a joy it is to be alive and running outdoors in the winter. It’s exhilarating!”

Very few aspects of life inspire people more than a new outfit — if they believe they look good, they’ll feel good, have more confidence and, in turn, perform to the best of their abilities. For winter training, proper running gear is a necessity, and the purchase of new gear may motivate athletes to leave their treadmills behind for the winter.

“Most folks start with a wind blocking undergarment or a pair of running shorts for the mid-section,” explains Joel Feinberg, owner of Universal Sole Running Events. “The top for women will include a sports bra—one that’s firm and also allows for wicking sweat—while men will have a wicking short sleeve run top to start with. Afterwards, the next layer will be a long sleeve top.”

In addition to tops, runners must ensure they have the following items as they prepare to train outside this winter, according to Feinberg.

“If it’s snowy out, the glare from the snow can also cause mental fatigue from squinting,” says Mike Norman, co-owner and co-founder of Chicago Endurance Sports. “And, if runners are running in the early morning or at night, clear glasses are very helpful.”

He adds, “To fully enjoy your time outdoors, you must have the right clothing and gear. If you don’t, it’s worth the investment to get those key items that will make your time outside as enjoyable as possible.”