The new Nike percent shoe is out and is faster than ever. Nike ZoomX Vaporfly Next % has dropped just in time for the Chicago Marathon and is shocking runners with its innovative design.

Vaporfly runners are a loyal bunch—so much so that the shoe has its own dedicated Instagram page. Once you’ve tried a Vaporfly, it is easy to understand this loyalty. The shoes produce fast results, a comfortable feel, and the cushioning to make feet able to sustain 26.2. It’s a true marathon shoe.

The newest release has been designed with all of the characteristics that runners love taken to a new level. Nike researched their older designs, worked with their scientific team, and talked with world championship runners to make sure they got it right with this shoe.

“Its second iteration dazzles with an improved upper (largely thanks to athletes including Shalane Flanagan who gave feedback after water weighed her down in Boston), a re-tooled midsole (a Nike Sport Research Lab solution that combined feedback from many of Nike’s elites) and a redesigned traction pattern (this was a major ask from Eliud Kipchoge after he ran a very wet race in Berlin).” – Nike News Release

Nike literally redesigned the Vaporfly from tip to toe to make it ideal for racing. I love that Nike values the opinions of top runners as they put together shoes that can be used by mid and back of the packers! Whatever you speed you run, this shoe will make you faster.

“This shoe is truly the result of our athletes, sport scientists, engineers and designers closely collaborating throughout the entire process of design, testing and manufacturing,” says Brett Holts, Nike VP of Running Footwear. “We are all so excited to see the NEXT% continue to push the limits of human performance on marathon courses around the world.”

I had the opportunity to try out the Nike ZoomX Vaporfly Next % this week on a treadmill and then on the road, and found the shoes to be everything promised in the marketing. I felt a bounce in my stride as the extra cushion and carbon plate pillowed my feet, propelling me forward with each step. During my warm-up mile, I felt a bit off balance and my form wasn’t in line. But, the second I bumped up my speed to a tempo pace, my form fell into place and my cadence was right on.

That’s the thing about these shoes—they want you to go fast. It is amazingly difficult to run at a slow pace in these shoes. Once I hit the faster pace, the shoes worked with my body to drive me forward and capitalize on my running form. I was balanced and able to focus on my upper body to maximize my speed.

Not only did the Vaporflys support my speed, but they looked good too! I received a hot pink pair that is eye-catching and will be easy to spot amid the tens of thousands of runners at Sunday’s Chicago Marathon. I’m pumped to be able to try these out on the streets of Chicago to see how they fare against the past model. 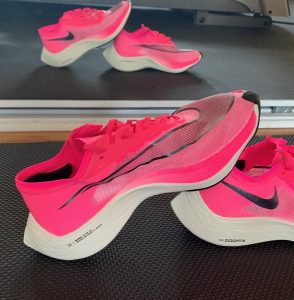