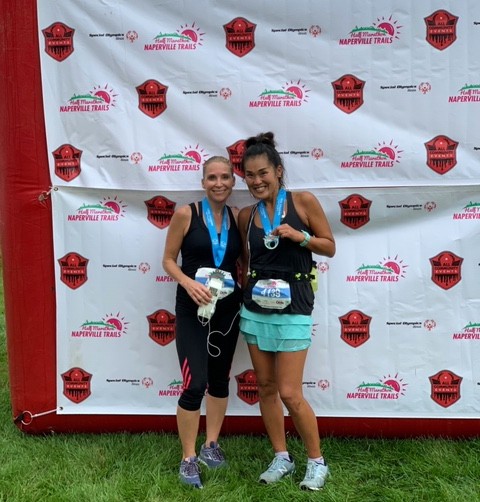 Over 600 runners gathered at the Forest Preserve District of DuPage County on a rainy Sunday morning to run Naperville Trails Half Marathon, organized by All Community Events that supports Special Olympics of Illinois.

I arrived at the race site and was greeted by wonderful group of volunteers who directed me to a parking area. I walked about half a mile to the start. Some areas were muddy because of rain but that gave me a glimpse of the trail conditions.

All Community Events offered a convenient packet mailing option at additional cost ($12.99), as well as race day pick up (not recommended by the race organization). Packet pick up was also available at Road Runner Sports in Naperville on Thursday. Having so many options makes this race really accessible to many runners.

I was able to convince my dear friend to run this race with me a day before the race. Unfortunately the website registration encountered technical problems but on-site registration was easy and quick.

Runners tried to stay dry under trees before the race began. I met several pacers. Sean and Jessica McQuown volunteered their time to pace 2:25 (11:03 mile) group and Kristi Marsh was there to pace 1:40 (7:38 mile). I don’t normally run with pace group but always a wonderful option to have when you have a goal to achieve.

Despite the rain, runners seem to be pleased with mid 60’s weather in September. The race started immediately after the national anthem at 8:30 am. The course was mainly on crushed limestone. A few areas seemed to be bit congested with runners going in the opposite direction, but I never had to worry about cars driving next to me. For a road runner like me, it was nice to be able to run on a soft surface like crushed limestone. But mile 12 reminded me this was indeed a trail run, as a gigantic frog leaped across my right foot. I never knew how high I could jump at mile 12 until this race, so I guess I learned something new about myself today.

Aid stations were spread out nicely and were well organized by enthusiastic volunteers. Both Gatorade and water were offered at each station. The course was well marked and volunteers did an amazing job directing all runners in a perfect manner. As the race neared the finish line, crushed limestone lead us to a grass-covered equestrian racetrack. This was definitely the hardest third of a mile for me.

The post-race area offered massage tables and a few vendors, and there was water, gatorade, apples, protein bars and trail mix in the food tent. All finishers received a red T-shirt (lady’s cut and unisex option available) at packet pick up and the 10th Anniversary commemorative medal at finish line. The top three age-group male/female finishes received additional medals.

My dear friend, Kimberly DePaola, who was crazy enough to join me in this 13.1 mile journey with such a short notice praised all the volunteers for their hard work and top-notch race director for a well organized race. She added, “it may not be wise to run a half marathon without any training.” I am very impressed with her determination and very proud of her placing the fifth in her age-group after an almost seven-year break from long distance running.

The top three men and women were: