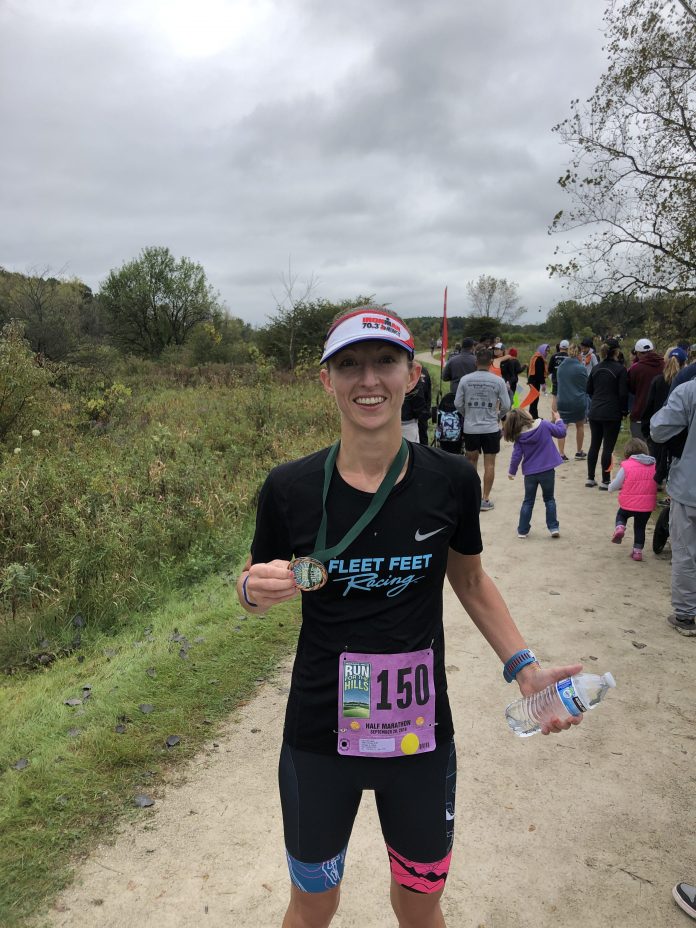 I’m beyond thrilled to have stumbled upon this local event.

What led me to it was my final long run for Ironman training. After Ironmans, marathons, and an ultra, I still struggle with training for distance running—from mental defeat to simply not pushing myself too hard so I can “make it” through. I’ve been lucky to line up runs in unique places, sometimes with friends, though that has resulted in some piecemealing of miles, finishing on treadmills or circling parking lots. Which gave me an idea; what if I sandwiched a half marathon event into my final long training run?

In Moraine Hills, I found exactly what I was looking for. Easy registration, not a bank-breaker. Just over an hour northwest of the city (McHenry) and it started late enough (8:30, with packet pickup until 8:15) that I would have plenty of time to get a few pre-race miles in. Plus the race was small enough that I wouldn’t have to stand cold in a corral when my foremost mission was the long run. Though it only lasted about five minutes, corralling was the only hiccup—easy enough to figure out the color-coded wave starts (15-second increments), but the assignments seemed random, both distance- and pace-wise. This led to minor confusion and some narrow passage difficulties, but all sorted itself out within the first mile.

I love running trails for my longs runs, and the word “hills” never fails to excite. What I was expecting was something technical (like Palos or Veteran Acres, which I felt would help control my pacing), but it was actually very groomed crushed limestone, and even sections of asphalt (more like Waterfall Glen). While the park’s trails still intertwine as you’d expect of a trail network, the course was so well marked (and well-staffed) that I never doubted I was on the right path, even in rare moments where I’d lose sight or sound of someone in front of or behind me. There were even signs alerting of upcoming aid stations. It was completely user friendly and I spoke with a few participants who chose it as their first half marathon. Aside from the intimidating promise of elevation (the rollers were fairly constant but none of the grades were obscene), this would be an excellent choice for a first half. Did I mention it was gorgeous? Despite the chill and drizzle, it was comfortable and felt like a great setting for a fall race.

As with any smaller local race (and often large events too), the vibe is incredibly friendly. Participants cheered each other on, the volunteers were numerous and supportive, and the communication was excellent from the receptive staff. I spoke with the Friends of Moraine Hills Program Coordinator Stacy Iwanicki after the race, and I was impressed that this FOMH staff themselves put this race on as an annual fundraiser for the park. They seem to have a terrific grasp on what’s important to participants (from communication to course markings to aid stations, quick results and awards, food, swag, and making our participation feel appreciated). On its new end-of-September weekend, I would recommend this one to anyone as a down-to-earth race or low-key training event.