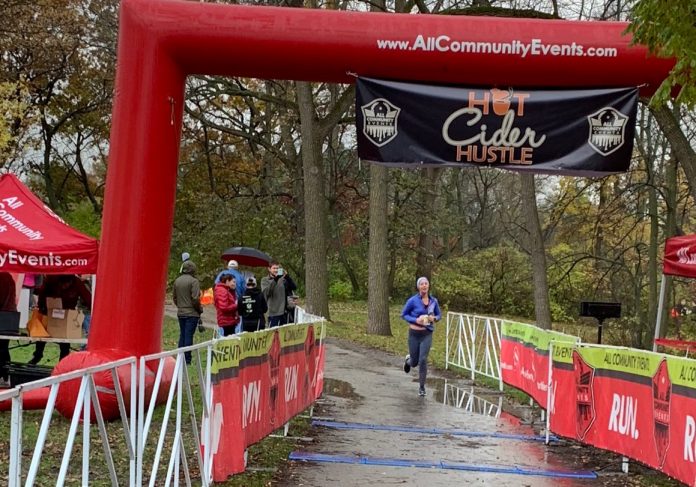 On Sunday, All Community Events held its annual Hot Cider Hustle in Shorewood, Wisconsin. Just outside of Milwaukee, this race began in Estabrook Park, and offered a 5K and 10 mile distance.

Both distances began promptly at 8:30 a.m. amidst vats of bubbling apple cider being prepared by staff and volunteers. Fall colors were in abundance at the starting line and the scents of cinnamon and apples wafted before runners urging us to get back to the finish line quickly.

This is a fall tradition for many and a great addition to your fall season running.

Runners left Estabrook Park and followed the trail out 1.5 or five miles, depending on your distance, before turning back.  The path is mostly flat and paved, allowing runners to gain speed. The tree-lined course is beautiful at this time of the year.

5K runners who finished under 30 minutes were able to race without rain. For everyone else, we braved rain through the last hour or so of the race. It was a steady drizzle, just enough to soak us through. However, temperatures remained in the mid 50’s and the wind was light, so the rain wasn’t so bad. For many runners, myself included, I’d rather have rain than scalding hot temperatures! Just another reason to enjoy fall running.

All Community Events does a terrific job with race organization, pre-race communication, on course support and post race fun. Parking can get a little tricky at this race so you need to be prepared to walk a bit to the start line.