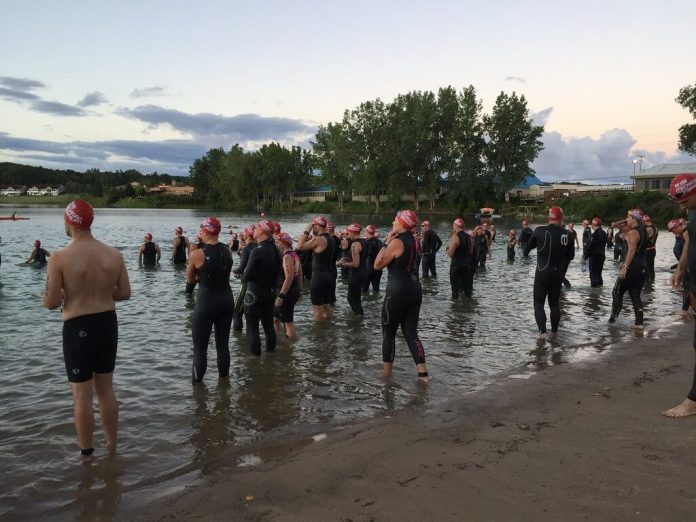 Close to 800 athletes completed the 2017 Michigan Titanium in Grand Rapids, MI this past weekend. Nicknamed MiTi, this event is a regional draw for Midwesterners and served as the USAT Aquabike and Duathlon Regional Championship. There were nine types of races over the weekend that individuals could participate in.

Full, half and Olympic distances were offered as triathlons, duathlons and aquabike races. Relay teams and chariot paratriathlete teams also were able to participate in all race options. Saturday, there was a practice swim along with an expo, race meetings and optional bike racking.  The expo was only five minutes from the race site which made the process smooth for all.

Sunday morning the full distance started at 7 a.m. and swimmers entered the water all the way up to 8:35 a.m. for the Olympic duathlons.  Swimmers completed their distances in Versluis Lake which was clear, calm and a nice 77 degrees.  After existing T1, racers made their way onto the bike course which was varying routes and loops depending on distance.

The course was filled with climbs and descents and while the bike course was open to traffic, police and volunteers were alert and aid stations were stocked.  By the time most athletes made it to the run course, the heat and humidity was rising. Aid stations worked to keep athletes cool with sponges and ice during their out and backs on Grand River Ave.

Racers made their way back onto Route 44 where many families and race crews were there to cheer them to the finish. Racers were encouraged to cross the finish line with their families and loved ones for a family focused celebration which is unique to independent races.

After finishing, racers were welcomed with a medal, liquids and a gourmet grilled cheese.  Other swag included a soft cotton participant shirt, toothbrush, nutrition and a sling backpack.  Racers were also allowed to use the YMCA for post-race showers which allowed Chicagoans, like me to only need a one night hotel stay.

As a first time participant at MiTi, I really enjoyed this challenging event. Definitely recommend to those looking for a challenge and high competition along with those back of the packers, like me.  Was excited to cross the finish line with my family and dog and celebrate another race completed!