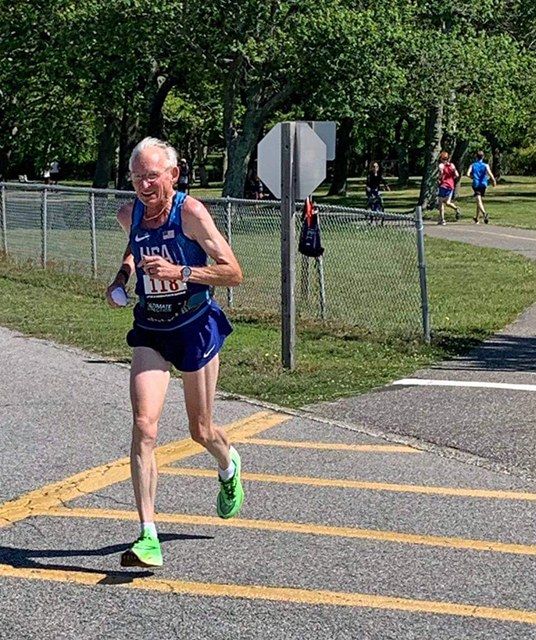 “日本語話せますか？”  (Do you speak Japanese?)

Gene Dykes knew I am Japanese and he kindly started our conversation just like that. Gene Dykes just broke the previous M70 50K world record at the USATF national 50K road championships crossing the finish line in 3:56:23 (7:37 per mile pace) by nearly 19 minutes from the previous record.

Gene Dykes is 73 years young and started seriously competing at age 58.  He was on a college track team but he said he wasn’t a good runner so he didn’t like to compete at something he wasn’t good at.  Therefore it didn’t cross his mind to race even though he always enjoyed running all his life to stay healthy.

His first race was a 7 mile trail run with his daughter in Philadelphia.  “It was an amazing race.  We tried not to step on rocks and hop over logs on trails.” said Gene.  His first road race was half marathon in Wilmington,  Delaware and he completed it around 1:34.

This is not Gene’s first time breaking a world record.  Gene competed in the Jacksonville Marathon in December 2018 and crossed the finish line in 2:54:23 (6:39 per mile pace), breaking the longstanding age group world record by 20 seconds. Although the course was certified by USA Track and Field, it wasn’t sanctioned.  Races must be both sanctioned and certified to be eligible for national age group records, therefore Gene’s 2:54:23 record wasn’t official.

He is humbly optimistic to break his own record. 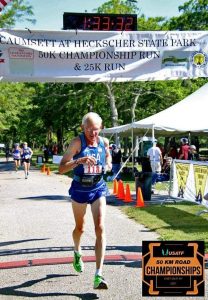 Gene is focused on “refueling” after the training rather than fueling before. He trained his body to run long distances on an empty stomach.  He can run 20 miles without any fuels.  He has been training his body to use glycogen that is the storage form of carbohydrates.  That’s what our bodies primarily use for energy and burn fat more efficiently.

But Gene never skips refueling after his run.  He often has at least 15 different cereals available and makes his own special blend using 10 + varieties. I am secretly hoping one company will offer to duplicate “Gene’s Cereal” so that we can all enjoy the taste of an incredibly strong runner’s breakfast.

You will never find Gene on a treadmill.  He said there is no such a thing as bad weather.  It is just a wrong choice of clothes.  If you dress properly, you can run outside anytime anywhere.  Gene enjoys companionship with fellow runners but he mostly runs his training miles on his own.  “I always run with my competitor every time.  He always shows up because I am my own competitor.”

During the Pandemic, he was okay that races were cancelled so that he could take “rest” and recharge his body although he felt terrible for all runners who were devastated to miss important races.  He wasn’t particularly crazy about all of the virtual races but he enjoyed the backyard ultra.  The backyard ultra is a form of ultra marathon race where competitors must run the distance of 4.167 miles in less than one hour and run consecutively for 24 hours, equaling the distance of 100 miles. 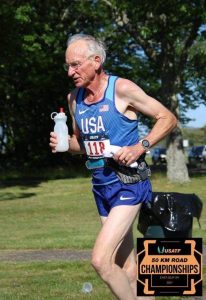 We all wonder what his secret is to running fast and strong.  We all learned Gene’s cereal is one thing but the other secret is not stretching, not cross training, just to “RUN”.

I asked Gene what you would tell your young self.  Gene said, “You have so many good years ahead of you.  Don’t run now.  Save it until retirement.  You have so much time to train and to travel different places to race. Don’t do it now. Your time is yet to come!”

His lifetime goal is to win 120-140 age group in Boston.  He is only 73 years young, so this means he is no where near at the finish line of his running journey.

Seems like the word “Amazing” is inadequate to describe his ability and determination.  It was my honor to spend an afternoon chatting with one spectacular runner.  Thank you Gene for making time from your busy day to share your story with Chicago Athlete Magazine.