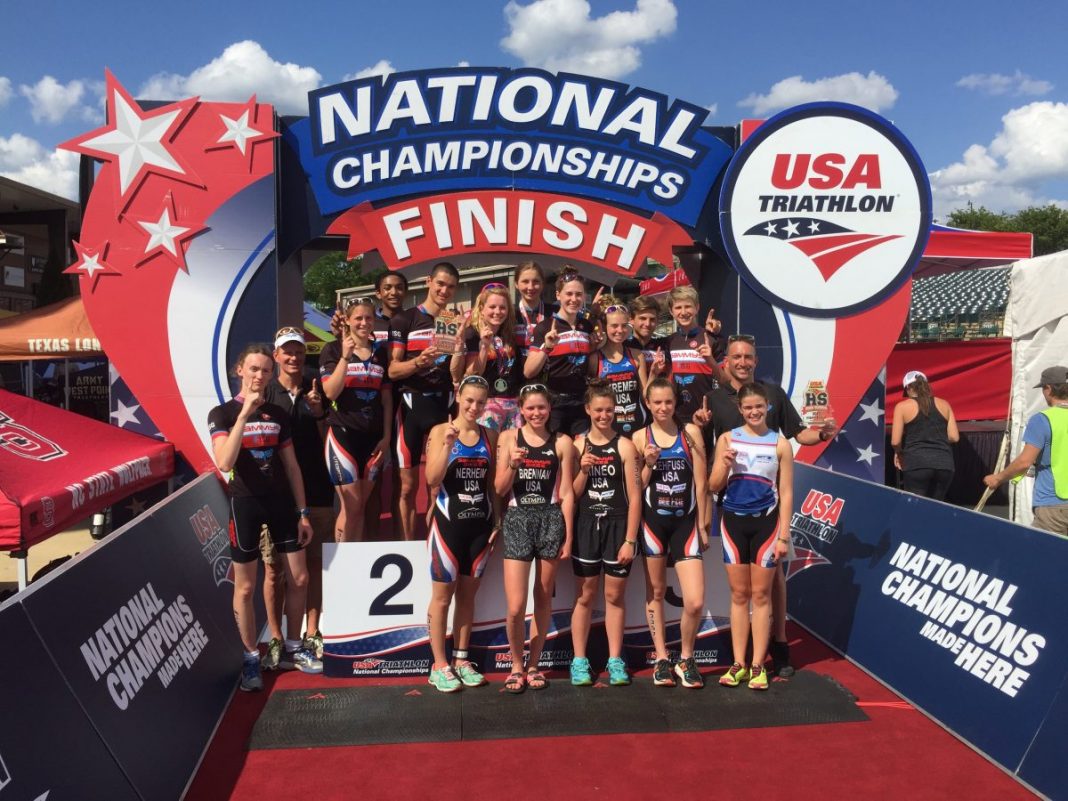 The females highlighted the day with four athletes finishing in the top ten.  Audrey Ernst was overall winner in the female division besting the field by over a minute with strong performances in all three disciplines.  Additionally, Lauren Garriques joined Ernst on the podium in third place with a strong bike performance that ignited her performance.  Lastly, Leah Drengenberg (fourth) and Tessa Brennan (ninth) had strong performances to round out the 4 person female team.

Ernst gradually built a gap on the rest of the field on the bike, recording the fastest bike split of the day in 36:37. She maintained her gap during the 5k run to finish nearly a minute ahead of her closest competitor in 1 hour, 10 minutes, 53 seconds.

“It was definitely one of the hottest triathlons I’ve ever raced in. I was really challenged both mentally and physically,” Ernst said. “I just tried to leave my heart out on the course and push myself to the max.”

“It’s an incredible experience to have a sport like this at the high school level,” Ernst said. “It’s really nice to have people who are my age that I can connect with, and there’s so much opportunity.”

On the boys’ side, Sammy’s Fox Valley took the win with 173 points. Will Cornish (fifth place) raced near the front of the race the entire day combing strong performances across all three disciplines.  Jack DeWeerdt (ninth place) was the second male finisher posting one of the top run splits on the day.  Justin Lorenz (21st place) and Elijah Stuart (36th place) rounded out the top four finishers for the male team of four competitors.

Other top finishers in the event included:

All members of the Sammy’s Fox Valley Region Team train at the cycling studio at the Sammy’s location throughout the year.

“This group of athletes have become family to me and my staff and our partnership continues to grow each year.  The athletes work incredibly hard throughout the year and seeing them bring them the national championship back to the Fox Valley region is very satisfying. I look forward to continued success throughout the year from this very talented group of student- athletes,” said Sammy Radi, owner of Sammy’s Bikes.

Ryan Giuliano, head coach of the Sammy’s team, was very pleased with the performances of the group in Alabama.

“While the group has trained hard through the winter in Sammy’s Computrainer center, the group has only recently been able to begin riding outside due to our cold Midwest temperatures.  These athletes have trained very hard to get ready for this event and the goal was to bring the national championship back to the Fox Valley region.  I am so excited for all the team participants as they all played a part in making this championship a reality.  I am really looking forward to the upcoming start of the Junior Elite Series and watching these high school athletes continue to compete on the national stage.”