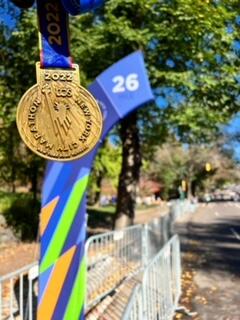 The 2022 TCS New York City Marathon returned on Sunday, November 6th, with a field of 50,000 participants from all over the world.

The New York City Marathon is one of three U.S World Majors and hosts the highest number of participants of all three races.  Almost 30,000 runners participated in the 2022 Boston Marathon and 40,000 runners participated in 2022 Chicago Marathon respectively.
From Staten Island to Manhattan, Runners covered the historic course that runs through five boroughs: Staten Island, Brooklyn, Queens, Bronx, and Manhattan.
Mary Newell, a resident of New Haven, Connecticut, competed her 6th New York City Marathon.  She is 72 years young and has no plan of retiring from running anytime soon. Mary started running at age 55 in January of 2006 as a part of her New Year’s resolution. 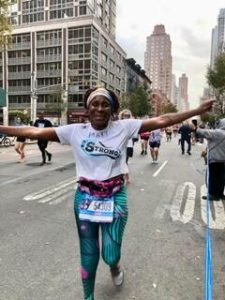 Her goal was to find a healthy version of herself.  She joined the local gym and started to power walk on the treadmill.  Power walking quickly became running and she participated in her very first running race in New Haven, CT on Labor Day of that year.  Since then, the New Haven Labor Day Road Race has become her annual tradition.
One of her friends recommended that she read a book called  “The Courage to Start” by John Bingham.  She went straight to Barnes and Noble from the race and got herself that book. She has gone on to do countless 5Ks, 10Ks, Half Marathons, and over 70 marathons and ultra-marathons including a 100 miler.
She encourages everyone to read the book and have the courage to start and continue to keep moving forward at any age.  Mary said, “I have 3 bothers and 3 sisters and I am the 2nd oldest.  My brothers and sisters were athletic but I hated to go outside.  I was happy reading books and watching movies inside.  But the girl who was afraid to climb a tree is running marathons now.  And I truly love running.”  Her secret to staying healthy and injury free is to dedicate her time to stretching. 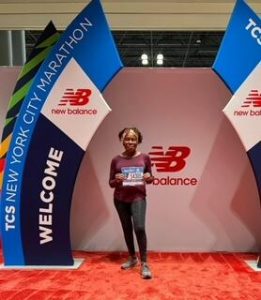 Her advice to runners is always remember your why’s and sign up for races of any distance.  Mary adds, “It is something so powerful about runners all going in the same direction and being a part of that race.”  Mary will continue to run the New York City Marathon for many years to come because NYC Marathon is her favorite race of all.  Mary’s advice for the first time New York Marathon Runner is “Remember, your goal is to FINISH the race. Everything else is just gravy!”
Aaron Min, a resident of Aurora, Illinois, completed his very first NYC Marathon.  He gained his NYC Marathon entry by running a virtual NYC Marathon a day after completing Chicago Marathon in 2021.  Ever since his first marathon debut in Chicago, 2017, he dreamed to run NYC because it is the largest race in the United States.  Aaron said his favorite part of the race was the crowd support from the spectators in each of the boroughs and from the volunteers. 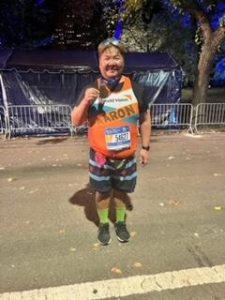 There were sections of deafening noise that made him push harder during the race.  The weather on Marathon Sunday was a topic amongst the news and runners leading up to the event.  But what Aaron didn’t expect was how long it takes to get to the start line.
The transportation from the Staten Island Ferry and bus to the start was a marathon itself. Aaron preselected the ferry option a few months prior to the race.  He suggests that runners board the ferry at least 3 hours before the wave corrals close.  The bus line after departing the ferry can be very chaotic with many exciting runners who are eager to get to the start lie.
Aaron is aiming to return to NYC marathon in 9 years to celebrate the NYC 60th Marathon Anniversary.  Aaron’s advice for the first time NYC marathoner is “Don’t be afraid to slow down and walk if you need to.  There are always plenty of runners in the same situation and you will never run this race alone.  I encourage you to put your name on your shirts so spectators can shout your name during the race.”
Aaron enjoyed touring NYC before and after the race.  He highly suggested everyone to try Big Apple Donut at Krispy Kreme.  It comes with a souvenir keepsake box. 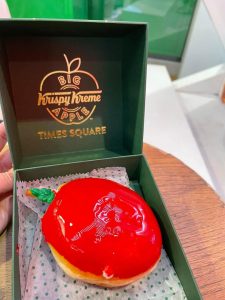 He also suggests to explore Coney Island and try the famous Nathan’s Hotdog. You can visit the finish line on the next day and engrave your hard earned medal.
Joni Augustine, a resident of Plainfield, Illinois, completed her first and only NYC marathon.  I said “only” because she does not believe she will run NYC marathon again because she wants to try other destination races in the future. 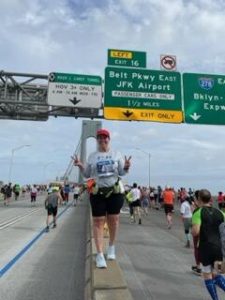 Joni wasn’t fond of the unseasonably warm weather on the race day and she was so glad to have her training partner running entire course with her.   She traveled to NYC with her husband and her son. Branden who is her biggest supporter. 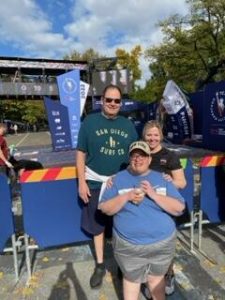 Joni’s favorite part of this trip besides the race was the visit to “Strawberry fields” in Central Park just a few blocks away from the finish line.  She visited the John Lennon Memorial Strawberry fields a day before the race.  It gave her a peace and calmness and was able to reflect her journey to get to New York City Marathon.
She highly recommends all runners visit and enjoy the peaceful time in the park.  Joni said the trip to get to the start line made her anxious because of the number of runners rushing.  Luckily, she was with her training partner/friend and that eased her worries.
Joni and her training partner ran the entire race together in NYC.  Joni had one goal for this race which was what her son, Branden,  made her promise on the race morning.  That was “Mom, Do not give up!”   Throughout her race, she reminded herself to keep moving forward.  She received several encouraging texts from Brandon and she knew he was cheering for her.   Joni was so glad and relieved to cross the finish line with her partner next to her. Branden’s first word to Joni was, “Mom, you didn’t give up!”  That was the best reward of all.
Congratulations to all runners who had a courage to start this journey.  Congratulations to all runners who completed this race.
Thank you for inspiring me.