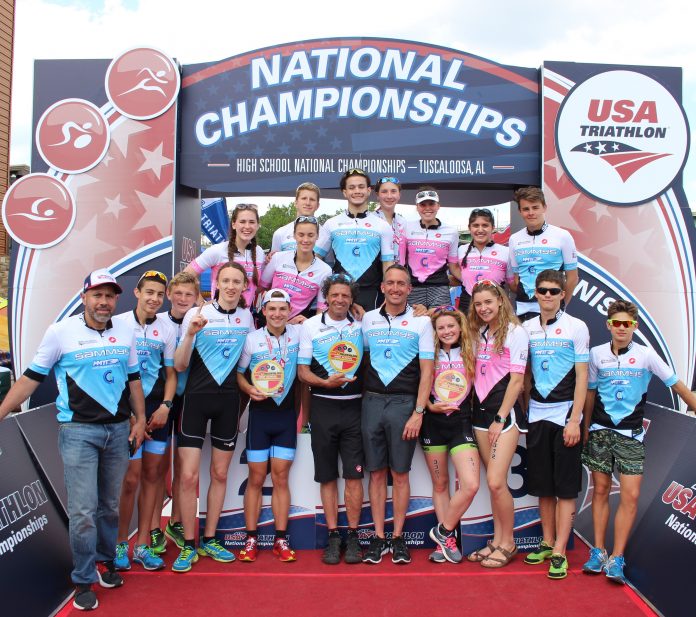 Seventeen members of the Sammy’s Fox Valley Region Club Team traveled to University of Alabama in Tuscaloosa for the USA Triathlon High School National Championships this past weekend.  All races were changed from triathlons (swim-bike-run) to duathlons (run-bike-run) due to strong currents in the Black Warrior River that were deemed unsafe for swimming. The high school athletes in Friday’s race instead completed a 2.5-kilometer run, followed by a non-drafting 21.45-kilometer bike and another 2.5-kilometer run. The team turned in some stellar performances to sweep all the award categories, overall team national champions, female national champions and male national champions.

The male athletes started the day off with an impressive showing as four Sammy’s athletes finished in the top 12.  Jack DeWeerdt led the contingent with a pair of strong runs and a blistering bike split that landed him on the podium in third place.  Justin Lorenz finished sixth maintaining a steady run pace while also delivering a very strong bike.  Kyle Izzo was the next finisher and used a combination of strong runs and bike to become the third top ten finisher on the team (ninth place).  The fourth and final scoring spot went to Ben DeWeerdt whose swift running led him to a 12thplace finish in his first high school race.  The male team score of 273 bested a tough North Georgia High School Regional team (225 points) to claim the overall male team national championship.

The females were up next and the girls also delivered a very tough performance to claim the overall female team national championship.  While 2017 national champion Audrey Ernst used a lethal run, bike, run combo to finish second overall in this year’s race, Audrey was notified at the award ceremony that she was penalized for riding solo too far on the left hand side of the road.  As a result, when her penalty was assessed, she was moved down in the results to seventeenth place.  The other members of the team delivered in a big way and were led by Lauren Garriques with her impressive fourth place finish.  First time high school competitor Julia Burling showcased her much improved run and strong bike to garner ninth place overall.  Tessa Brennan rounded out the scoring delivering a key nineteenth place finish ahead of several athletes from key competitors. The Sammy’s female team completed the race with 248 points, 26 points ahead of the second place finisher.

Success by the Sammy’s team was also achieved in the High School Boys’ Paratriathlon Open division, as Owen Cravens, a visually-impaired athlete competing with guide Eric Palmquist, finished first overall in a time of 57:03.

Other top finishers from the team in the event included:

With difficult spring weather occurring in 2018, the team has only been outside riding twice this entire year.  Nevertheless, the coaching provided by Ryan Giuliano and Kurt Woodward clearly had the athletes ready to perform at the highest level.  A key component of their preparedness was the utilization of the cycling studio at Sammy’s Bike Shop in St. Charles, IL.  All members of the Sammy’s Fox Valley Region Team train at the cycling studio at the Sammy’s location throughout the year.

“This year’s championship was extra special for me as I was able to witness first-hand the grit and determination these amazing athletes exhibited in Tuscaloosa. I see each of these athletes several times during the week and they have become part of my family and my desire to see them succeed has become a passion for me.  I look forward to continued success throughout the year from this very talented group of student- athletes,” said Sammy Radi, owner of Sammy’s Bikes.

Ryan Giuliano, coach of the Sammy’s team, was very pleased with the performances of the group in Alabama.

“I was very happy with the early season performances by this strong group of athletes.  As we progress to our outside bike and swim training, I expect to see continued improvement in their performances.”  Kurt Woodward, co-coach of the Sammy’s team added, “The competition was fierce this year with several teams arriving with a strong group of male and female athletes. To win the overall title for the third straight year is a testament to the commitment and dedication this group has exhibited to perform at the highest levels of the sport.”