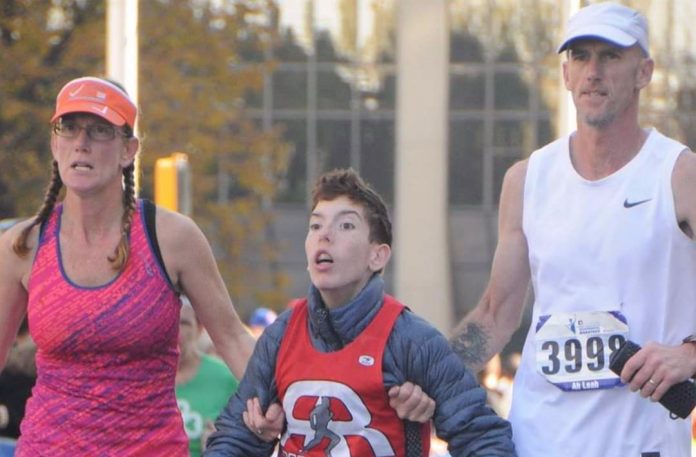 No one can lift you up quite like family.

This year’s Marine Corps Marathon in Washington D.C. was a struggle for all 30,000 runners who took part. With monsoon-like rain and cool temperatures, October 27 wasn’t a very nice day to go for a run around the nation’s capital.

That was especially true for Kathy Labus, Andrew Labus and Scott Hooper, of Crown Point, Indiana, who were running their second marathon together. Kathy and Scott are sister and brother, and Andrew is Kathy’s 16-year-old son. Andrew has cerebral palsy and is confined to a wheelchair on race day, so Kathy and Scott take turns pushing him for 26 miles.

For the last 0.2 miles, it’s up to Andrew to use his own legs—with a little help from Mom and Uncle Scott. On that soggy Sunday in D.C., Kathy and Scott pulled over at the 26-mile marker, removed the tarps and garbage bags that had been keeping him dry(ish) for more than four hours, and lifted Andrew up to walk the final 1,056 feet together, as a family.

“That moment—to see his smile—and just to be present so I could be there for him—that was it,” Kathy says. “My brother was completely overwhelmed emotionally as well. Andrew is usually overwhelmed at the end of a race but this time he wasn’t. He was all smiles and was just excited to be out from under that tarp and moving.”

More often than not, it’s Andrew and his twin brother, William, who lift up Mom. Running runs deep in the family, starting with Kathy’s dad, Bob Hooper, who is one of the original members of the Calumet Region Striders. “We used to sit around the dinner table waiting for him to finish his five-mile run,” she remembers.

Dad’s love of running is what led Kathy to join the cross-country team at Crown Point High School, running as often as she could as a teen. Then she hurt her foot and doctors told her to stop running, so she did. After high school she joined the Navy, served aboard the USS Frank Gable, got married, and 17 years ago, she found out she was pregnant with twin boys.

“The story of my boys’ birth is deep and it’s long and it’s painful. It involves feeding tubes and surgeries,” she says. She and her husband, Bob, spent a lot of long nights in the NICU not knowing if their boys would be OK. Needless to say, running was the last thing on Kathy’s mind for a few years.

Cerebral Palsy can manifest itself in different ways, and that was the case for William and Andrew, both of whom were born with CP. In Will’s case, it was less severe. It’s what Kathy calls a “silent disability”—something he feels every minute of every day even though others might not even notice. Andrew’s is more pronounced, meaning much of his life has been spent in a wheelchair and he requires more round-the-clock care.

Will has even carried on the family legacy of running, joining the cross-country team at Crown Point High. He might be the slowest guy on the team, but he still runs faster than most able-bodied adults and can tick off nine-minute miles no problem. In two years on the team, he’s never missed a practice, including all of the optional off-season conditionings. “He’s a pretty determined young man,” Kathy adds.

Andrew has also gotten in on the Labus/Hooper clan’s love of running. After a decade away from pounding the pavement, Kathy decided to walk the annual Turkey Trot with her parents a few years ago. They didn’t cover that 5K very fast, but something about being out there and moving brought her back to her high school days and she decided she wanted to start running again—and she wanted to do it with her boys.

The running club helped buy an attachment for a wheelchair so that she could push Andrew in races, and they started running a bunch of 5Ks together in 2013.

One year later, along with Uncle Scott, the idea of doing a marathon together didn’t seem all that crazy. They signed up for the Monumental Marathon in Indianapolis, trained like never before, were featured on the cover of the local paper, and then Kathy’s foot injuries came back at the worst possible time. That November, she was in a walking boot instead of at the start line in Indy, and it was time to start all over again.

Kathy was pretty over getting hurt, so she took it upon herself to relearn how to run from the ground up. She had to run in a way that protected her feet. “I want to run forever,” she says. “I want to run until I’m old, like my dad.”

In 2015, Kathy, Andrew and Scott made it to the start of the Monumental Marathon, and four hours and 23 minutes later, they were lifting Andrew up at the finish. Their goal had been just to break five hours.

With the marathon ticked off their collective bucket list, the family could sit back, relax, and enjoy running some shorter races together. “I wasn’t ever going to run another marathon. I was good,” Kathy says.

That was until this spring, when she and Andrew went to Atlanta to run the Publix Half-Marathon and met some members of the Kyle Pease Foundation. Like Andrew, Kyle is confined to a wheelchair but has finished dozens of triathlons and running races thanks to some help from his older brother, Brent. They became kind of a big deal when they finished last year’s Hawaii Ironman together. Their foundation promotes inclusion through sport and raises money to supply adaptive chairs and bikes, which are astronomically expensive.

The Marine Corps Marathon is the biggest fundraiser of the year for the Kyle Pease Foundation, and Kathy couldn’t say “no” when she was asked to take part—as long as Scott was up for it too. He didn’t need much convincing, and after a big summer training block, they were at their second marathon start line in D.C. last month. Once again, four hours and 23 minutes later, they were standing together as a family at the finish, only this time it was unclear who was lifting up whom.

“My boys never complain,” Kathy says. “I believe in myself because I’ve seen what’s possible for them.”

As for what’s next? Scott and Andrew think a sub-four-hour marathon is doable. Mom still needs a little convincing. Luckily, in the Labus household, the motivation to get out there and do it isn’t hard to come by.